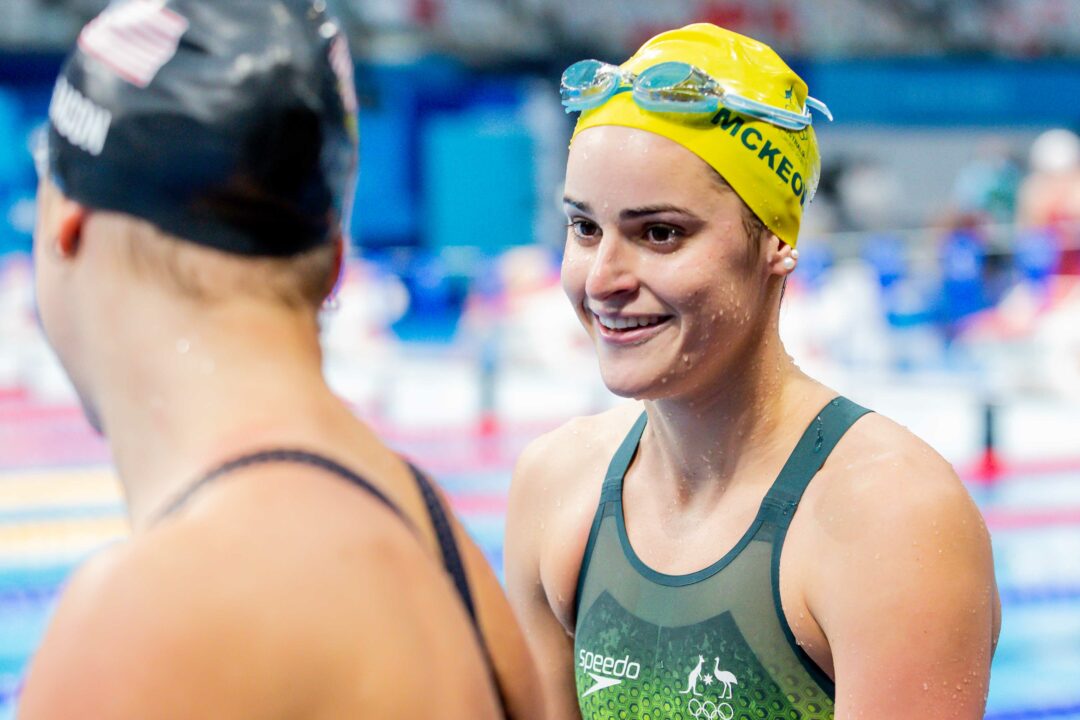 The women's 100 back in Budapest will feature the three fastest swimmers in history and the only ones who have broken 58 seconds. Archive photo via Jack Spitser/Spitser Photography

Our most recent poll asked SwimSwam readers which clash of the titans was more intriguing at the upcoming World Championships:

Question: Which “showdown” is more intriguing at the 2022 World Championships?

Key absences from the likes of Ariarne Titmus (women’s 400 free) and Kyle Chalmers (men’s 100 free) rob us of seeing rematches from some of the most epic races of the Tokyo Olympic Games, but we will get to see the sequel of the women’s 100 back and men’s 100 fly in Budapest.

The women’s 100 back features the three fastest swimmers in history, and the only ones who have broken 58 seconds, while the men’s 100 fly has the two fastest ever and the only two sub-50 in a textile suit.

At the 2019 World Championships, Smith became the first swimmer in history to break into the 57s in the women’s 100 back, leading off the U.S. medley relay in 57.57. That time was more than a second quicker than Masse went to win the individual event in Gwangju (58.60), as Smith was not entered in the event.

Since then, McKeown has raised the bar, and has now broken the 58-second barrier five times. Masse has stepped up her game as well, with three 57-point swims under her belt, and Smith has responded by breaking 58 five times over the last 11 months.

McKeown got the best of the trio in the Olympic final, narrowly missing her 57.45 world record in 57.47, while Masse was also .02 off her best in 57.72. Smith added a touch, earning bronze in 58.05, and will be looking for her first major title in this race three years after breaking the world record.

In the men’s 100 fly, Caeleb Dressel has been dominant since breaking out in 2017, when he became just the third man sub-50 in history and the first to do so in a textile suit.

He’s now ripped 49 seven times, but had to save his fastest swim for the Olympic final last summer when 200 fly world record holder Kristof Milak dropped half a second and clocked 49.68 for silver. Dressel broke the world record in 49.45, but the race was surprisingly tight after Dressel had rolled to back-to-back world titles with relative ease.

Both matchups are incredibly intriguing in the coming week, but 64 percent of readers favor the three-way showdown in the women’s 100 back, with nearly 36 percent coming back with the men’s 100 fly.

That likely stems from the fact that Milak has only been sub-50 once, and it remains to be seen if he’ll be on top form in Budapest. But, if it gets close coming down the stretch, you have to imagine the Budapest crowd will be deafening.

Below, vote in our new A3 Performance Poll, which asks: Who will win the women’s 100 free in Budapest?

Sorry to dissapoint, but looks like Mckweon has come in cruise mode, not kill mode.
Suspect her results will below her best.

Watch out for Curzan. She may surprise all.

You have dominant Dressel vs a Milak who hasn’t been on form this year. That’s not exciting tbh. I predict Dressel’s margin of victory will be significantly higher than Tokyo.

The women have a legitimate 3-way race of WR holders which could turn out any which way. How exciting.

Three world record holders in one race is a rare occurrence.

Masse hasn’t been worse than second in the major championships since 2016.

There’s no room for error in this race for any of these three. Race will come down to the touch and maybe another WR to the winner.