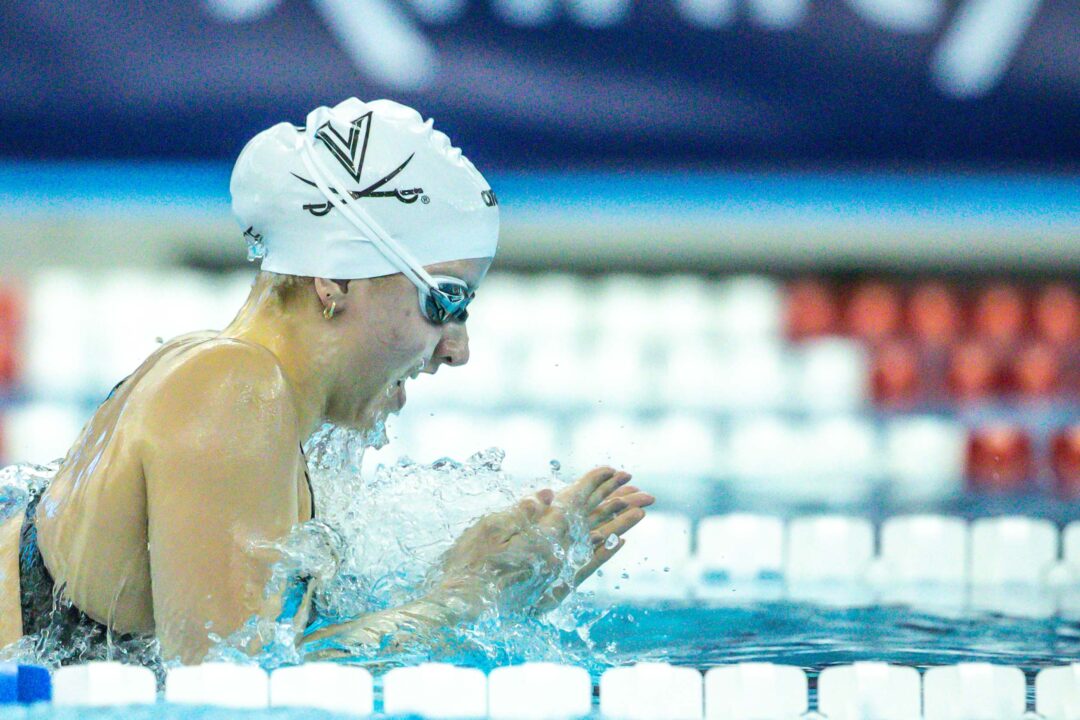 Readers believe that the breaststroke is the 200 event that changes the most from short course yards to long course meters. Archive photo via Jack Spitser/Spitser Photography

Our most recent poll asked SwimSwam readers which stroke 200 has the biggest change from short course to long course:

Question: Which event has the biggest difference between short course yards and long course meters?

The 200 breaststroke came out on top with over 44 percent of votes, though all strokes picked up their fair share.

The results largely mirror what we saw in a similar poll from January 2020, where it was asked in general, which stroke is the most different between LC and SCY, not specific to any one distance. Breaststroke picked up 51% of the votes in that poll.

This poll narrowed in on the 200s to give each stroke a level playing field, but it remains clear that fans believe breast has the biggest difference between the two formats.

If we look at the difference between the fastest times ever swum in the long course and short course (yards) pools, the 200 stroke event with the biggest percentage change is backstroke. The men’s 200 back has a 16.9% difference from SCY to LCM, and the women’s is 15.0%.

Anyone who’s raced competitively knows the distinct difference between having seven turns and walls to work with in a SC race compared to just three in LC. While this is felt in all four strokes, no doubt, perhaps breaststroke is where one is forced to change their stroke the most (longer glide in LC, quicker tempo in SC) between the two in order to manage fatigue and execute optimally.

Underwaters play a major role in the other three events, more so back and fly than free, but the swimming itself largely remains the same.

Another thing you could look at when considering this question is which stroke consistently sees the same swimmers excel in both short course and long course. One could argue that back and fly are the most common to see someone do well in one and not the other, largely hinging on their ability in the underwaters.

The best breaststrokers (and freestylers), on the other hand, generally tend to rise to the top no matter the course, though for breaststroke specifically, it may not be an entirely fair argument because the best swimmers tend to more commonly specialize in that one stroke.

Below, vote in our new A3 Performance Poll, which asks: Which meet will be faster this summer:

What Bobo Gigi said must be true!

SCY needs to be done away with

I think the best way to determine which stroke/distance is hardest to translate between short and long course would be to look at swimmers who are (or were) consistently at the top in one but not the other. We’d probably have to shift the analysis to SCM vs. LCM.

I’d also be curious to see the percent change for each hundred across a 400 IM.

If GB was focusing on euros and Russia was racing, I would have voted euros.

It’s backstroke. More than half the race SCY is spent UW. There have been countless great SCY backstrokers that are average LCM backstrokers.

44% of the people are correct! Time convertor clearly shows that there is the greatest disparity in breaststroke.

This gives a much better picture than the time converter.

I agree but can you name more good SCY breaststrokers or backstrokers that aren’t/weren’t at the same level in LCM?

I’m not sure what Kasper Stokowksi and Bjorn Seeliger’s best times are in LCM but you can probably add them to the list as well.

Honestly not arguing one way or another, and most of people you listed are just primarily underwater swimmers. I wouldn’t say that they have a hard time converting, they’re just not as good at swimming as they are underwater. However I’ve known a lot of very good long course breaststrokers that can’t figure it out scy and vice versa. They’re two different strokes, while the difference in all the other strokes is simply amount of time they can spend underwater. You can say the same thing about Dean, and Coleman’s other strokes as you can backstroke, backstroke just seems the worst because their underwater speed is the same in every stroke so it makes the biggest difference in the slowest… Read more »