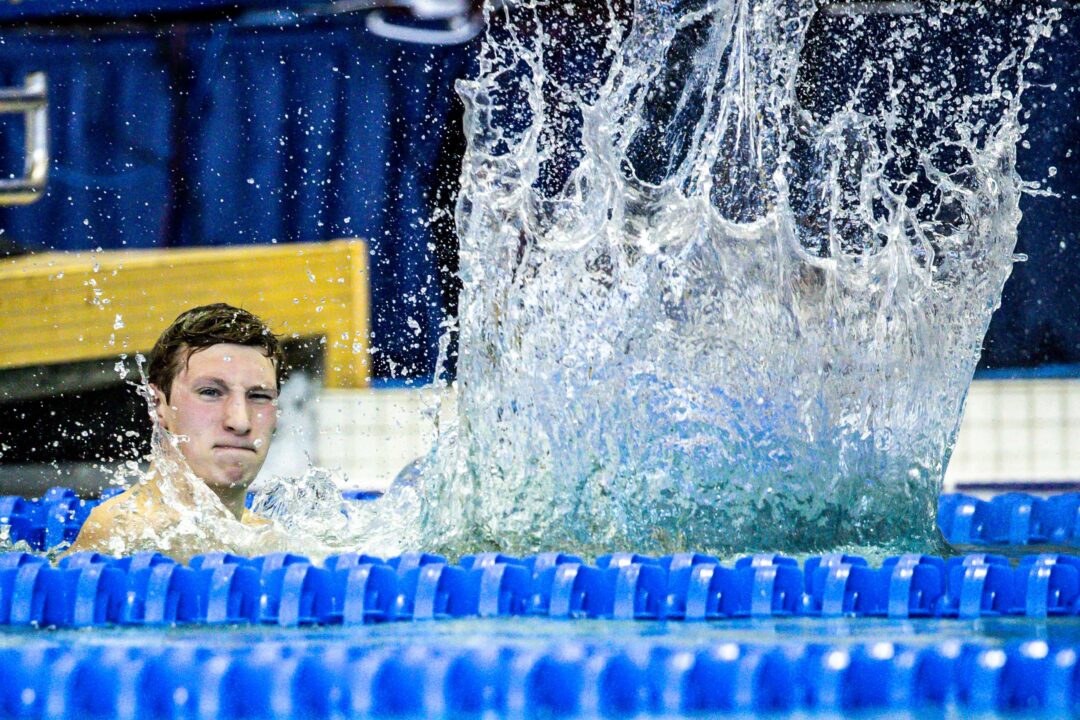 Johnston was fifth at NCAAs last season, but his time of 14:33.61 was just over two seconds shy of runner-up Will Gallant (14:31.34). Archive photo via Jack Spitser/Spitser Photography

Our most recent poll asked SwimSwam readers who their early-season NCAA Championship pick is in the men’s mile:

Question: With Bobby Finke graduating, who are you favoring to win the 1650 free at men’s NCAAs this season?

There hasn’t been much debate as to who will be the winner of the men’s 1650 freestyle at the NCAA Championships in each of the last two seasons.

Finke was unable to follow that performance up with a national title victory one month later, as NCAAs was canceled due to COVID-19, but moving into his junior and senior seasons with the Gators, he was a clear lock to win the event.

The Tampa, Fla., native did just that, winning the 2021 NCAA title by more than 16 seconds, and then last season, despite swimming more than 10 seconds slower than his PB, won a repeat title by over nine seconds.

But now, Finke, who also added a pair of Olympic gold medals in the men’s 800 and 1500 free in between his junior and senior seasons, has moved on, opting not to use his fifth year of college eligibility.

All of a sudden, the 1650 free becomes one of the more intriguing races to pick at men’s NCAAs this season, with several contenders in the mix but no clear-cut leading candidate.

In SwimSwam’s most recent A3 Performance Poll, Texas junior David Johnston was the top reader selection by a pretty wide margin, earning more than 39 percent of the vote.

Johnston was slightly faster a few weeks prior to NCAAs at the American Short Course Championships, clocking 14:32.40, and is coming off a successful summer that included a PB 15:02.37 swim at U.S. Nationals in the long course 1500.

Gallant, also a junior this year at NC State, was not only the runner-up at NCAAs last season, but he also won that LCM race at Summer Nationals over Johnston in 14:57.08. Despite that, he only received 13.1 percent of votes, taking third behind Johnston and Georgia’s Jake Magahey (21.5 percent).

Ohio State’s Charlie Clark emerged as the second-best long course distance freestyler in the U.S. this past April, placing second to Finke and securing a berth at the World Championships in the 800 and 1500 free at the International Team Trials.

However, despite finishing more than 17 seconds clear of third-place Johnston in the 1500 at Trials, Clark was back in eighth at NCAAs the month prior, which is likely why he only picked up 11.3 percent of the vote. But Clark was still within four seconds of runner-up Gallant at NCAAs (14:35.38), so he should be in the mix for the win.

NC State senior Ross Dant was third at NCAAs last year in 14:31.72, matching his finish from the season prior while producing a near-identical time (14:31.17). Dant rounded out the individual options with 10 percent of votes, while just under five percent of voters picked ‘other.’

One of the candidates not listed in the poll is Texas sophomore Luke Hobson, who has been on fire early this season and was 14:40.15 in this event during the mid-season Minnesota Invite last December. Hobson has emerged as more of a 200/500 free specialist, however, making him a true dark horse in this race.

Below, vote in our new A3 Performance Poll, which asks: Set to race in short course meters for just the second time, will Katie Ledecky break a world record during the FINA World Cup?

Johnston already has a substantial track record of gutsy prime-time performances, from that prelim 400IM as a freshman where he made the big final over Hugo, to rising up and making the big final in the 500 last year.

Can’t wait to see what Enyeart can do as well, those guys’ practices must be insane.

Guesses as to winning time?

It looks like it could be a heck of a race at NCAAs between Gallant, Dant, Johnston, McGahey, and Clark.

If Enyeart from Texas continues to improve, he might be with that group as well. Liam Custer, Freshman from Stanford, best time is 14:37 from HS, so he certainly could challenge too.

Am I missing anyone else that might be able to go in the low 14:30s or better?

Even I a hater of will galant thinks he wins

Enyeart 15:05 lc. That’s at least a 14:35scy not factoring in the year of training he’ll have under Eddie. Off to a great season already and his sexy mullet gives him a 3% passive speed boost