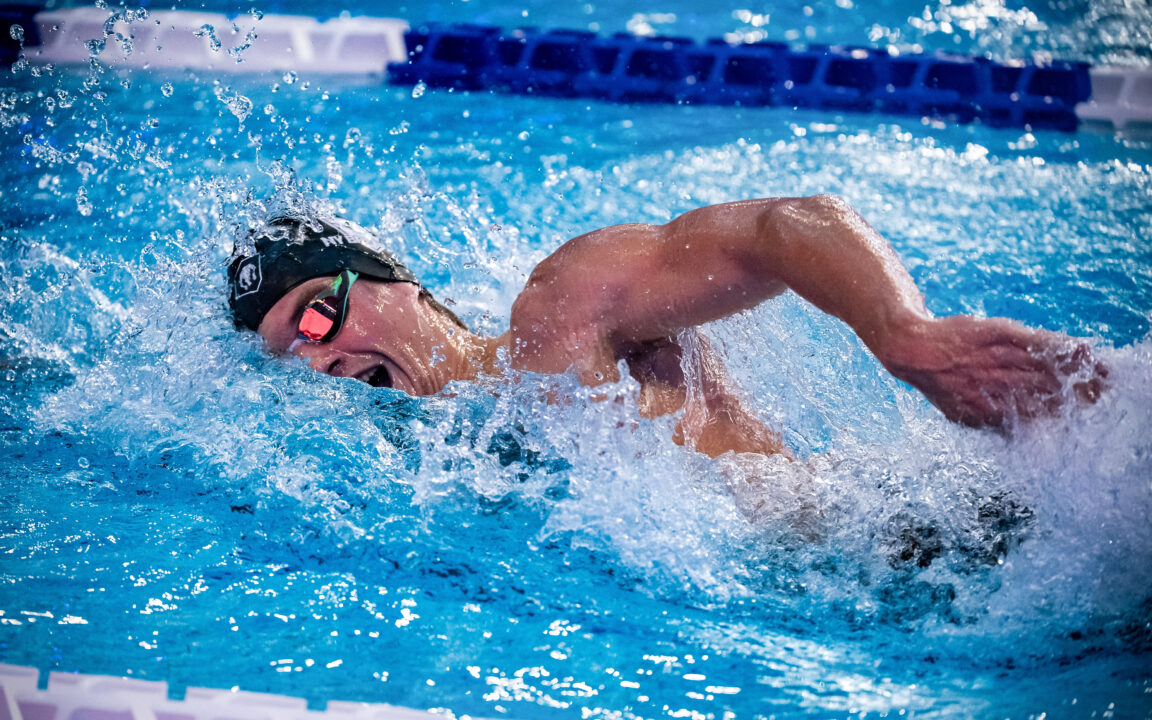 Smith dropped more than four and a half seconds to beat Daiya Seto and help the NY Breakers finish third over Tokyo in the ISL's Play-In Match. Archive photo via Giorgio Scala / Deepbluemedia / Insidefoto

Australian Brendon Smith has been one of the few bright spots in the New York Breakers’ 2021 International Swimming League (ISL) season, and he arguably saved his best performance for last during the league’s Play-In Match this week in Naples.

The Breakers struggled all season long, placing fourth in all four of their regular-season matches, and entered the Play-In Match with the other bottom-ranked clubs—DC Trident, Iron and Tokyo Frog Kings—with the top two finishers advancing to the playoffs in November.

Smith was a standout performer for the Breakers through the club’s first four matches of the season, going undefeated in the men’s 400 freestyle while also adding a pair of wins in the 400 IM, ranking 57th in the league and second on the club in MVP scoring with 92 points upon the conclusion of Match 10.

However, during the Play-In Match, Smith turned things up a notch when the stakes were raised.

The Breakers were in the midst of a valiant effort on Day 2 of the match, looking to bridge the gap up to the Frog Kings and avoid a fifth consecutive fourth-place finish.

Smith, who charged to a 3.5-second win in the 400 free earlier in the match, stepped up on the blocks in the 400 IM—the last individual event of the meet—alongside Tokyo’s Daiya Seto with the Breakers trailing the Frog Kings by 18.5 points.

Seto, on the other hand, was undefeated for the season in the event, including posting the fastest time of the season in Match 10: 3:58.65. The Japanese star is also the event’s world record holder at 3:54.81.

Despite the gap in season-best times coming into the match between the two, Smith didn’t back down from the challenge Seto presented, taking over the race lead on the backstroke leg and holding it through the breaststroke.

On freestyle it was all Smith, splitting an incredible 54.37 to gain more than two seconds on Seto and win the race in a time of 3:59.33, taking more than four and a half seconds off his previous personal best. Seto touched second in 4:01.92, his slowest showing of the season.

Jackpotting Tokyo’s second entrant, Daniil Pasynkov, Smith scored 16 points in the race to Seto’s 11, and his Breaker teammate Brandonn Almeida took fifth to score an additional six points, meaning New York narrowed their gap behind Tokyo down to 7.5 points heading into the skins.

The Breaker swimmers pulled through in the skins, outscoring the Frog Kings by a further 11.5 points to take third in the match, three points clear of Tokyo. And it wouldn’t have been possible without Smith’s gargantuan swim in the 400 IM.

Super star in the making

You can certainly make a case SCM going off this ISL season. However, until he actually puts up a LCM time that is seriously contending for national selection; ie World level contender level …………