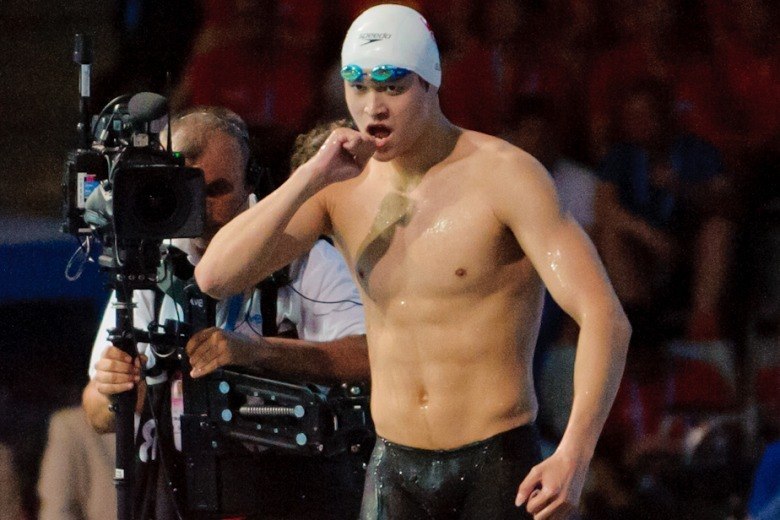 Xu Jiayu ran away from the rest of the field to claim the top time in the world in the... Archive photo via Victor Puig

‘The Swimmers’ presents the true story of sisters Sarah and Yusra Mardini who fled Syria to have a chance at swimming at the 2016 Rio Olympics.

Xu Jiayu ran away from the rest of the field to claim the top time in the world in the 100m backstroke at the Chinese Spring National Championships. This meet also serves as the Chinese selection meet for the Asian Games. Placement at this meet and performance at past international meets will be considered when selecting the Asian Games roster.

The first event was the men’s 100 backstroke.  Xu Jiayu does not turn 19 until August 25th, which would lower the FINA Jr World Record in the 100m backstroke over a second, however FINA looks at those records based on year of birth, not actual birth date, so he’s just outside of the eligibility period.

He also posted the fastest time in the world this year in the 100m backstroke. His time of 52.34 makes him the second person of the year to break 53 seconds, and moves him ahead of the two Japanese swimmers that were ahead of him in the TYR world rankings. His previous best time of the year was from February where he went 53.42 in Perth. He competed at the London Olympic Games for China in the 200 backstroke but did not advance out of finals with a 2:00.26. With his most recent time drop in this event, he could be a huge asset for China at the Asian Games.

There was a great race in the women’s 400m freestyle. Yi Birong got to the wall in 4:06.18, just tenths ahead of Zhang Yuhan at 4:06.60. Briong’s time elevates her to 10th in the world this year. Mireia Belmonte Garcia and Katie Ledecky have the top times in the world right now at 4:03’s, but there is a large cluster of 5 girls at low 4:06’s.

In the women’s 100 breaststroke, Shi Jinglin added the 9th fastest time in the world this year, winning the event with a  1:07.16. The Asian games will be very competitive; Japan’s top breaststroker of the year, Satomi Suzicki has been 1:07.08 and is sitting 6th in the world.

Sun Yang is proving he is back in shape after his suspension. In late April his suspension was lifted and he also parted ways with his longtime coach, Zhu Zhigen. This is Sun’s first time competing following his suspension, and he is expected to swim the 200, 400, and 1500m freestyles. Rumors are floating around that Sun Yang will not be swimming the 1500 this weekend, but as of now, he is still telling the media that he will be swimming all of his races. Whether he swims the event this week or not, he should be the favorite to be selected for the Asian games, where he would racing his rivals, Park Tae-Hwan and Kosuke Hagino.

In that picture, and in general, Sun Yang is a bad ass. Love that guy.

I don’t know how important height is in the different strokes in swimming. I think height is least important in the breaststroke and most important in the freestyle.rebecca soni was only 5,8 but she was a world class breaststroker. Ruta is also 5,8. The time for xu jiayu is impressive but I,m don’t know if height will be a limiting factor for him because the backstroke requires some height. He,s just 6 feet tall but ryosuke irie is 5,10 and is a world class backstroker. Kosuke hagino is 5,9 and is also a good backstroker,hagino is really impressive because he,s good in multiple events. China,s top freestyle sprinter ning zetao is just 6,3,he was born with a defect on his… Read more »

That’s impressive that Zetao is performing so well with a congenital knee injury, I’m wondering if he is missing a patella?

Xu results show how early is to predict anything for 2016.There is always someone coming out of nowhere and suprising the World.

yes, that someone in 2012 was Manaudou, Ruta, Le Clos and Ledecky (although her form in the US trials suggested it was not really a surprise).

And I bet no one predicted those four swimmers to win Olympics individual gold as late as January 2012.
There will always be a surprise.

while I don’t think any one country will upset the US. The combination of all the countries taking gold medals in a few individual events will make it much more of an even playing field. Sun and Jiayu are serious gold medal contenders in multiple events.

I agree with Samuel predictions I’ve seen batted around are that China won’t dominate swimming until at least the mid 2020’s.

It sucks that Xu can’t get the World Junior Record because of when his birthday falls in the calendar year. FINA should change that policy and do it by chronological age. What’s their rationale for keeping it this way??

This is not a definitive team selection ( performances at past internationals events will also be considered), so it is easy to understand than many will not be as fast as they can, as traditionally happens in China, but even so…. amazing!!! China is going to crush Japan in Asian Games and be the King of the World around 2018-2019. I think Xu Jiayu is a better 200 than 100 backstroker, so I would not be surprised with a 1:54 low or even 1:53.

there is no chance that China will be better than the USA in 2018. zero, the US is way too deep and has so much talent coming up.

But ledecky and Missy are 3 to 5 gold medal locks automatically.. Missy might get beaten on 100 back and 200 free.. but on 200 back no way.. and ledecky is unbeatable by now..

Also the mens and women medley relay from US are too far ahead by now.. same for 4×200 relay.. unless they got DQ it´s tought..

There is little chance for China to upend USA in 2018-2019 unless China discover their own Missy + Ledecky + Le Clos in the next two to three years.

With some of the sprint freestyle results coming from Japan and this strong backstroke now from China, there could be some outstanding competition on the medley relay come 2016. And watch out for Brazil in the 4×100 free.