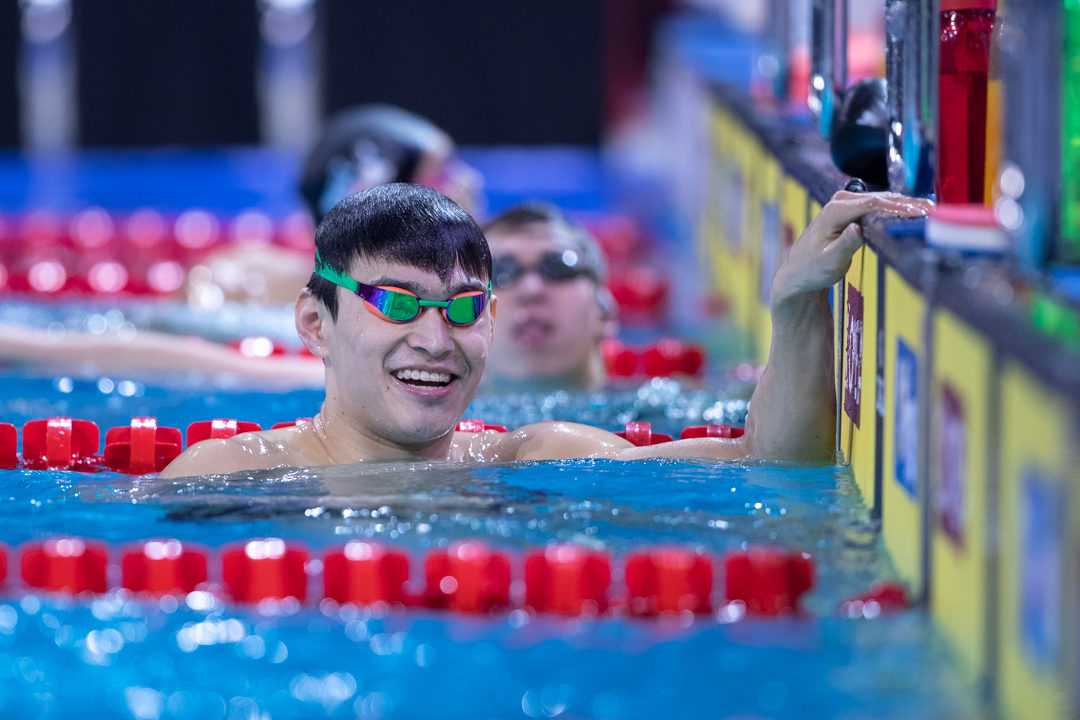 Following Mack Horton‘s podium protest of his 400 free win on the first night of the 2019 FINA World Championships, Sun Yang responded during his press conference.

“I was aware that the Australian athlete had dissatisfaction and personal feelings towards me,” he said, according to The Independent. “But it was unfortunate because disrespecting me is okay, but disrespecting China was very unfortunate and I felt sorry about that.”

Australia’s Horton, the silver medalist in Sunday’s race Gwangju, protested the gold medalist Sun’s performance by abstaining from podium celebrations, standing behind the platform on the floor during the Chinese national anthem. He also kept an intentional distance between himself, Sun, and third-place finish Gabriele Detti during post-ceremony photo ops.

At the time, Sun responded by accusing Horton of playing mind games to destabilize him. “I don’t think I need to explain myself any further. I have done what it takes to prove I’m clean … all athletes should be shown respect. On the competition stage, every athlete deserves to be respected and there’s no need to use these sorts of cheap tricks to affect each other.”

Sun similarly added on Sunday: “He [Horton] wants to influence my game with such move, but I do what I should do.”

Now, Sun is facing a CAS hearing in September regarding the World Anti-Doping Agency’s appeal case against FINA’s decision not to sanction the world record holder over his blood vial-smashing incident in September.

In pre-meet warmups, the pair were reportedly intentionally given a wide buffer during a warm-up session. Sun and Horton were slated to warm-up right next to one another in lanes 3 and 4 in the practice pool before Sun’s Aussie Coach Denis Cotterell moved the Chinese swimmer to lane 5, according to The South China Morning Post.

“I just won’t share a podium with someone who behaves in the way he does,” Horton said after the race Sunday. He asked Detti to do the same, but the Italian said something to the effect of: “I worked too hard for the bronze, I want the podium.”

When asked about his protest, Horton said: “[Sun’s] actions and I guess how it’s been handled speak louder than anything I’ll ever say.”

Sun also added in his press conference: “I’m very happy to win this event for the fourth time in a row and I’m very proud of myself,” Sun said. “I think this has been the greatest achievement in history for the Chinese team … so I’m very satisfied.”

And disrespecting the sport is…?

EVERYONE DOPES. Some just get caught

This is cynical. Many major countries don’t have cultures of steroid abuse in sport. Partly because they have more funding set aside by the Govt for setting up sound Anti-Doping organisations. Not all fast swimmers are drug cheats. But Sun Yang is one who has been proven guilty…

Horton needs to pull his head in and show some respect for the sport. He is behaving like a spoilt child.

Lance, I mean Sun, you aren’t China. And clean swimmers aren’t buying your attempt to deflect.

Sun disrespecting the entire swimming and sport world by being an arrogant drug cheat. Sit down.