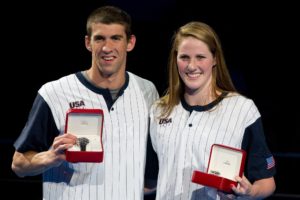 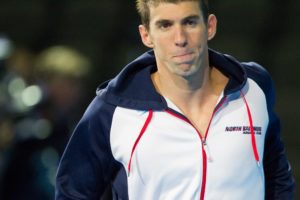 The last day of swimming at the 2012 London Olympics will feature 4 races that on their surface seem to have not much mystery for the gold medal: the men’s 1500, the women’s 50, and the two medley relays. However, with a dominant favorite in each race, the inevitable upset (as we’ve seen happen throughout this meet) will be that much more exciting.

Full, live results (will replace with a PDF after the session).
Live video from NBCOlympics.com (US Only).

This women’s 50 free had a pretty even start across the field. That was about all that was even, as the Netherlands’ Ranomi Kromowidjojo anointed herself as the next great Dutch sprinter by winning the women’s 50 free in 24.05. That’s a new textile best, a new Olympic Record, and a sweep of the women’s sprints.

Belarus’ Aleksandra Herasimenia grabbed a silver, just like she did in the 100, with a great effort of 24.28, breaking her own Belarusian record. The bronze went to Kromowidjojo’s teammate Marleen Veldhuis in 24.39.

Germany’s Britta Steffen marks yet another World Record holder and defending champion at this meet who failed to even medal; she was 4th in 24.46. Britain’s home-town swimmer Fran Halsall gave a good effort to end a tough meet with a 24.47 – her fastest swim of the three rounds. She got out to a great start, the only swimmer with a real advantage coming off of the blocks, but couldn’t hold on to it once the water started churning.

Sweden’s Therese Alshammar did well to continue battling through injury to touch 6th in 24.61, followed by Jessica Hardy (24.62) and Arianna Vanderpool-Wallace (24.69).

For the second time this meet, an unusual start nearly led to disaster. When China’s Sun Yang hit the water, suddenly the London Aquatics Centre was silent. The World Record holder, the monster favorite, the sure-thing to break the record again, might not even get a chance to swim. When the officials said “stand up,” Sun hit the water.

But a reprieve: the arena was NOT silent moments before, and shouts by the crowd that caused the false start gave Sun a pass; the command to stand came from crowd noise. Without this relief, which we might have missed the greatest 1500 swim in history.

Yang, for a time, looked like he was going to be under 14:30. That fell away shortly after the halfway mark, but this World Record was never in question. Yang closed his 1500 in 53.49 (just when you thought his 55 from Shanghai was good) en route to a 14:31.02. What was once the only World Record in an Olympic event to survive the rubber-suit era of 2008 and 2009 has now been lowered three-and-a-half seconds in 12 months. Sun’s training with Dennis Cotterell in Australia,  the coach of the former World Record holder Grant Hackett, seems to have taken Sun to even another level. That’s a bit ironic: this is an event that Australia has historically dominated, but this year was only the second time since 1936 that Australia has failed to produce at least a finalist.

The old World mark, set by Sun at last year’s World Championships, was 14:34.14. This swim was largely expected, so many will overlook it, but none-the-less it’s as impressive as any that we’ve seen at these Olympics.

Behind Sun, blowing away the field, this race featured a phenomenal battle for silver between Canada’s Ryan Cochrane and the defending Olympic champion Ous Mellouli of Tunisia. Despite the latter’s typically-great closing split, Cochrane was able to edge just ahead for the last 500 meters of this race, and held on for silver in 14:39.63. That’s the 4th-best time in history, and the fastest ever by a swimmer hailing from the Western Hemisphere. Mellouli took bronze in 14:40.31.

We discussed yesterday that this women’s 400 medley relay was well within reach of the American women. Things didn’t start off quite on target with where they needed to be, but huge swims on the back-half of this relay between Dana Vollmer and Allison Schmitt pulled them away, as they touched in 3:52.05. That broke the 3:52.19 set by the Chinese women in 2009 at the World Championships. The other two swimmers, Missy Franklin and Rebecca Soni had great swims as well, and Soni was clearly swimming with an amazing confidence after the 200 breaststroke World Record individually.

Not to be overlooked, the Australians swam very well in 2nd to earn a silver medal in 3:54.02. That included a breaststroke-leg split of 1:06.06 from Leisel Jones, a far cry better than what we saw from her in the individual race. Butterflier Alicia Coutts also swam well in 56.41.

The Japanese women also performed well for a bronze, no surprise, in 3:55.73. They couldn’t maintain contact with Coutts’ butterfly leg, but did get good swims from Aya Terakawa on backstroke (58.99) and Satomi Suzuki on breaststroke (1:05.96).

Russia had a great front-half, including a 1:04.98 from Yuliya Efimova that was missing in the individual 100, but the Russians are still absent a butterfly leg for the medal.

The Americans expected to be dominant in this relay, but thanks to a fantastic breaststroke swim from Japan’s Kosuke Kitajima (58.64), the Americans actually trailed through the final strokes of Michael Phelps’ butterfly leg. Phelps had a great finish to hand off to Nathan Adrian with a quarter-of-a-second edge.

The Americans’ depth is their advantage, however. The Americans have arguably the best anchor in the world, and the Japanese don’t really have one (though Takuro Fujii swam very well for him on the anchor, he’s a butterflier in truth). Adrian split a 46.85 to take a victory that will appear easy, but was very hard-fought, for the Americans in 3:29.35. That continues their streak of having never been beaten in this relay at the Olympics, with the only non-victory coming in 1980 when the Americans boycotted.

Japan held on for silver in 3:31.26, which gives them their highest-ever finish in this relay at the Olympic Games.

Australia took bronze as they ran down the Hungarians thanks to James Magnussen’s 47.2 anchor: his best swim of this meet yet. Great Britain was better than prelims, but couldn’t pull off the monstrous upset, and touched for 4th in 3:32.32, while Hungary was 5th in 3:33.02.

The German men, bronze medalists at the World Championships last year, wrapped up a hugely disappointing, medal-less meet in 3:33.06 for 6th.

Who is doing the commentary for the swimming feed coming in through NBCOlympics.com?
I’ve enjoyed their freshness and perspective.