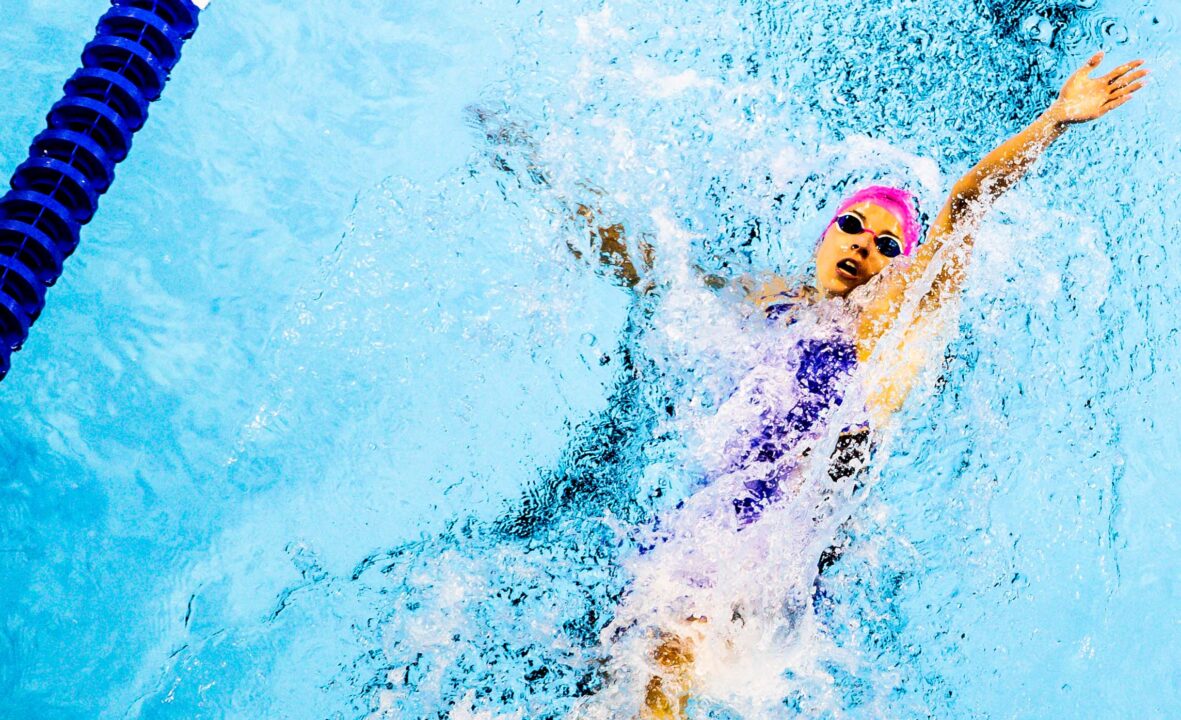 200 Back World Record Holder Regan Smith didn't swim the 200 back at the Pac-12 Championships, but she will at the NCAA Championships. Archive photo via Jack Spitser/Spitser Photography

Stanford freshman Regan Smith will swim a tough 200 fly/200 back double on the final day of the 2022 NCAA Swimming & Diving Championships. That is a shift from the day 3 100 fly/100 back double that she chose instead at last week’s Pac-12 Championships.

Hyman also had three relay swims, but wasn’t on Stanford’s 400 free relay that year, which meant no final day triple. The Cardinal used Smith on the 400 free relay at Pac-12s, and if they do so again, that would be a challenge for her, though she did do a triple (100 back/100 fly/400 medley relay) at Pac-12s and was faster in the medley relay leadoff than in the individual 100 back.

The NCAA sticking with timed-finals for all relays should reduce the total number of swims on Smith’s schedule, though.

She is seeded #1 in the 100 back, #1 in the 200 back, and #1 in the 200 fly going into NCAAs. She will face steep competition, especially in the backstroke races, against Olympians Rhyan White and Phoebe Bacon, star Virginia freshman Gretchen Walsh, and the defending NCAA Champion in the 100 back Katharine Berkoff.

The girl who broke my freshman record swam the 200 breast, walked over two lanes, swam the mile. Missed my record .3

Hey, I swam this double in college! Can confirm it makes you want to die.

Feel like I’d just put her on the 200 Free relay and let her focus on the individuals the last day. Feel like she’s the type of swimmer where a day off might not be best for her. I also know sprint Free is one of her weakest disciplines but with her underwaters she can definitely be 21 mid from a relay start, which I don’t think Stanford has 4 women faster than that

The problem with that idea is that Stanford needs her on the other 4 relays and doesn’t on the 200 free relay.

How do you draw that conclusion? Look at the splits on the actual relay. A vs B. She was the fourth fastest at 21.4. I don’t see how you can conclude she’s not one of the four best options. She just proved she is when it matters. The finals split means a lot more than an exhibition flat start in prelims. Regan Smith ALWAYS gets up for it when it matters. Does that seem unfair? Genuinely curious.

Stanford making a statement with an 800 medley! ; )

I think Regan can win both legs of the difficult double but it will probably ruin her for the relay, and that’s fine. I’d rather see her pull off the crazy double than save herself for a relay that probably isn’t winnable anyway. If you were really optimistic about Stanford’s chances to beat UVA in the 400 free relay you might say Torri can match Kate, a revitalized Ruck can match G. Walsh, the Shaw/Wheal/Goeders leg can match the Tiltmann/Cumo leg, and Regan can match A. Walsh. As unlikely as that already was, it’s now less likely. Let UVA have their fun in this event this year and then crush the record with Curzan next season.

Well it’s more about their breaststroke leg. Yes Regan could get Gretchen on the back, Torri could get Alex on the fly, and Taylor could get Kate on the Free, but we all are forgetting about the breaststroker. Allie Raab is Stanford’s best bet, but she’s only around 59. and she’s graduating this year. Next year, they really don’t have any breaststroke specialist coming. Hopefully they can convert someone as versatile as Torri into breast for a 58 swim, or get someone like Sam Tadder, but point being their options are limited.

The free relay has a chance I think. They have Huske, Ruck, Goeders, Wheal, R. Smith, Crisera, and Crage. All talented sprinters and all could easily be on either the 4×50-200 free relays

Agreed 400 free relay has a chance

Yes, I agree Regan can pull off the “dirty double.” However, I don’t think she can match Alex Walsh in the 100 free. Alex has more sprint speed in the freestyle.

You’re probably right, although they’ll both be coming off the 200 fly final and a long 4 days of racing so that will play a role too.

But Walsh won’t be coming off a terrible double that day.

The Pink crocs will empower her to do this nasty double