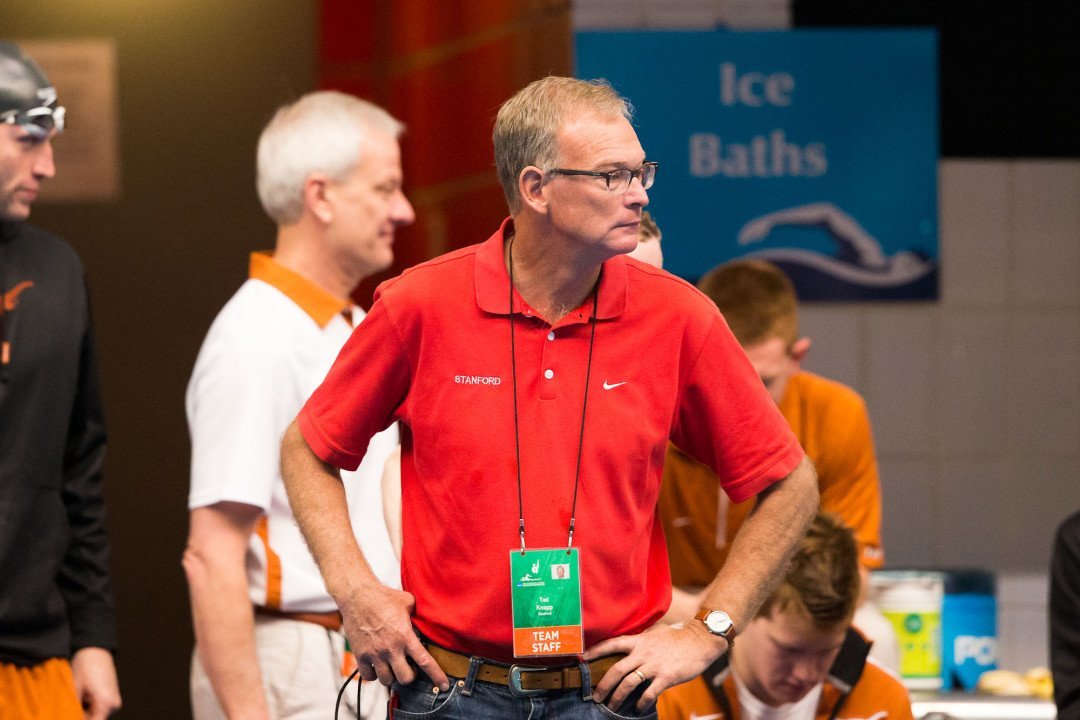 Stanford men's head coach Ted Knapp will have a lead when his swimmers hit the water next week. Archive photo via Tim Binning/TheSwimPictures.com

The women’s team title went to Stanford, while the men’s award is yet to be determined next week. While there’s still a long way to go before a men’s winner is determined, the first points have rolled in, and so the picture is starting to take shape.

As usual, Stanford, USC, and Arizona State were strong in the men’s diving competition. The Cardinal, especially, racked up big points – with Bradley Christensen winning the 1-meter and Tarek Abdelghany won the platform. Meanwhile, USC’s Dashiell Enos and Henry Fusaro placed 1st and 2nd in the 3-meter.

In the Pac-12, while the women score to C finals, the men only score top 16 – and not all of those spots were filled by the 5 men’s teams.

Each team is allowed to have a total of 20 scorers of combined swimmers and divers, with divers counting as half of a roster spot.

Arizona was the only of the conference’s 6 teams that did not participate in diving – just one year removed from having a senior diver, Rafael Quintero, finish 2nd on both the 1-meter and platform at the NCAA Championships.

Nice, gonna need that when Cal gets 5 in the backstroke final. My gut tells me Cal will win but logic tells me Stanford will win with their crazy distance group

Stanford doesn’t have the sprinters. Relays are sorta important

Relays aren’t meaningless at conference meets, but barring a DQ, they’re not deal-breakers. Relays, for example, won’t even negate half of Stanford’s diving lead over Cal.

Agree, I have always said that for Conference meets. Relays don’t mean that much especially with so few teams in their conference. It is more depth….how good is your 18th swimmer? Great minds think alike!

Okay, so take that 12 points and multiply it by 5 relays. 60 points isn’t a towering margin but its certainly a significant one

Stanford will be able to put in a very very good 800 free relay and a decent 400 free relay, I think this meet is going to be very very close

Sure, 60 points is significant. Not enough to have swung most of the conference meets over the last decade, but it is meaningful. However, Cal won’t get 12 points on Stanford in every relay. Stanford is the top seed in the 800, for example. In the 200 free relay, Cal is seeded 2nd and Stanford is 4th. That’s only a 4 point difference.

At the end of the day, in 19 out of 20 years (by super scientific roughly estimated math), relays aren’t what decides the Pac-12 Champion.

Although Stanford has made huge improvements from last year and will likely dominate the mid-distance and distance free races, they just don’t have the speed to beat Cal. Relays score double points, my dude.

If I was a betting man, I’d go with Cal over Stanford with Cal winning several exciting and competitive relays to gain the advantage.

you’d think Cal would ramp up their diving program since they are in the hunt for the national title every year.

Isn’t it a virtually new program? US mens diving has always been thinly spread .& foreign divers might want to join a more established set up .