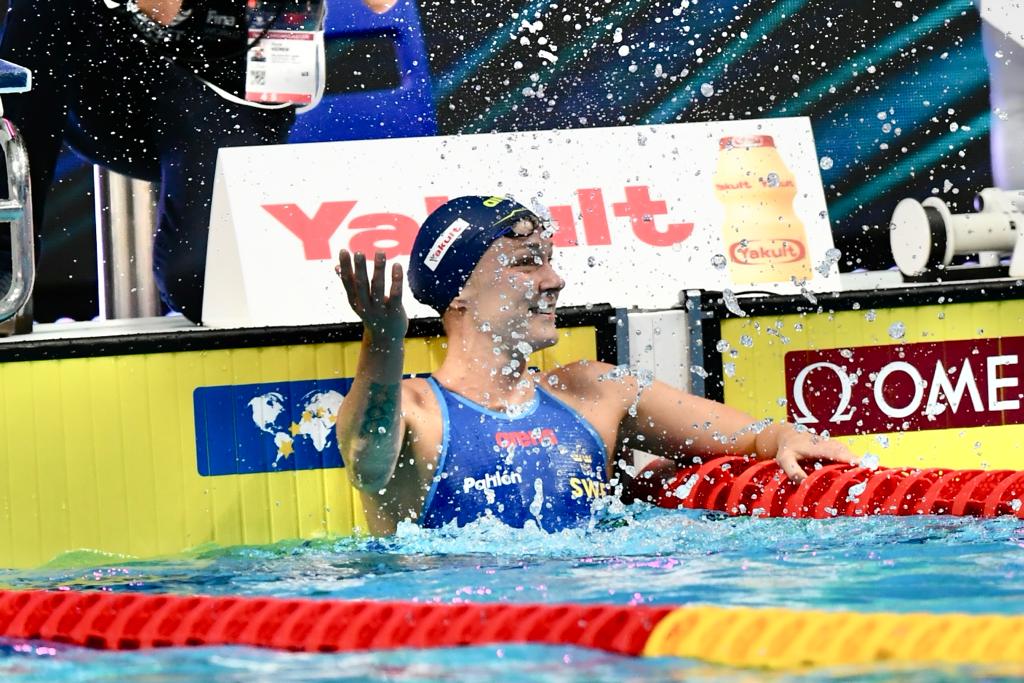 After scratching the 100 free, Sarah Sjostrom lead off Sweden's 4x100 free relay in 53.12, which would've won gold in the individual event. Archive photo via Fabio Cetti

The British women repeated as the 4×100 freestyle relay European champions on Day 3 of Euros in Rome. Sweden had a held the lead through the first 200 meters, but Great Britain continued to close the gap on the third leg, then after diving in less than a half-second behind, Freya Anderson brought them home in 53.54 for gold, the third-fastest split in the field.

Sarah Sjostrom got Sweden off to a tremendous start, clocking 53.12, the fastest lead-off in the field by 1.69 seconds. Sjostrom won silver at Worlds in 52.80, and though this swim was over three-tenths slower and well off her world record, it still would have won her gold in the individual 100 free here in Rome. Sjostrom opted to skip both the 100 free and 100 fly at these championships, focusing instead on the 50 free and 50 fly. Earlier in the session, Sjostrom won her fifth European championship in the 50 fly.

Hungary’s Nikoletta Padar scratched the individual 100 free semifinal to focus on the 4×200 free relay. Here, she led off the relay and posted 55.19, much faster than the 55.66 she posted in prelims.

Interestingly, France opted not to use Charlotte Bonnet, who won silver in this event on Day 2, on their relay. Bonnet showed herself to be on good form in the 100 free; in the semis, she posted 53.56 for her fastest time in three years. Mary-Ambre Moluh led the French off, posting 55.55 after qualifying for the women’s 50 back final in 27.86.

Marrit Steenbergen continues to be an absolute superstar on the Dutch relays. Earlier in the meet, she swam the fastest rolling split in the women’s 4×200 freestyle, and the fastest 100 free split by a woman in the mixed 4×100 medley relay, which was a blistering 52.33. Though she wasn’t quite as fast as that in this relay, she still had the fastest rolling split in 53.02. She overtook Silvia Di Pietro, powering the Netherlands to the bronze medal ahead of the Italians.

The British duo of Anna Hopkin and Freya Anderson posted the second and third fastest splits in the field, though a bit off Steenbergen’s pace. Hopkin was a tenth slower than she went on the mixed medley relay, but 53.44 is still a strong split for her. She also began to close the gap for the Brits, out-splitting Sweden’s second leg Louise Hansson by .77 seconds. Anderson was under her bronze medal time of 53.63.

Silvia Di Pietro had a good swim as well, anchoring the Italians in 53.56. Though Steenbergen ran her down, Di Pietro’s 53.56 split is significantly faster than the 54.17 she anchored the mixed medley relay in.

Does an B Team Australia still win Euros?

If France had put CharBo on the relay instead of Moluh, they might have won a bronze medal.

AUS, CAN, USA don’t have a worry in the women’s 4 x 100 meter freestyle relay except from the Chinese.

Might be true, but don’t forget that several of the countries are missing swimmers or not using their best swimmers.

The results in the women’s 4 x 100 meter freestyle relay at the Tokyo 2021 Olympics prove otherwise.

It’s not worthy of a true champion the way Hosszu presents herself at the moment – it’s time to retire as a great champion and legend.

No 52s at all seems slow for a top level international meet.

Even an 18 year old Claire Curzan can produce a sub 53 rolling split.