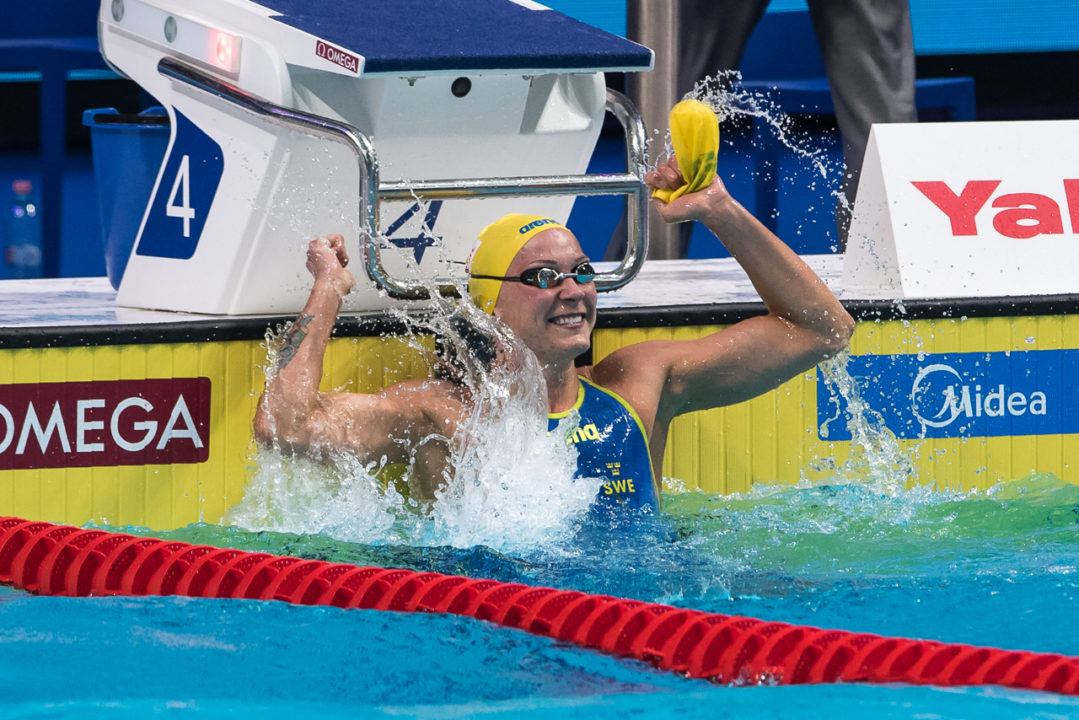 In the World Cup cat-and-mouse between Sarah Sjostrom and Ranomi Kromowidjojo, the Swede cam out on top on day 1. Archive photo via Peter Sukenik/www.petersukenik.com

In addition to Xu Jiayu‘s new Chinese National Record in the men’s 200m back and a double performance by Vlad Morozov, that resulted in his tying his 100 IM World Record and lowering his own 50m free World Cup Record, several other elite athletes made their presence known on day 1 in Tokyo.

Sweden’s Sarah Sjostrom was in the pool against World Cup rival Ranomi Kromowidjojo in the women’s 50m freestyle tonight. The pair have been going back-and-forth in the 50m free, 50m fly and 100m free throughout this World Cup, but the Swede got the upper hand in Tokyo this evening. Sjostrom registered a time of 23.26 for the gold, while Kromo settled for silver in 23.40.

Kromo’s teammate Femke Heemskerk earned bronze this evening in 23.69, while Olympic champion in this event, Pernille Blume of Denmark, finished just off the podium in 4th with a time of 23.81 to represent the 4th swimmer under 24 in the race.

For her part, Heemskerk opened tonight’s session earlier with a convincing win in the 400m freestyle. Stopping the clock at 4:01.29, the veteran Dutch racer held off the rest of the field to win by over 2 seconds, as Japan’s Miyu Nanaba touched in 4:03.80 for silver, while Natsumi Shibata rounded out the top 3 in 4:04.20. Of note, bronze medalist in the 800m in Rio, Boglarka Kapas was also in the race, bu registered 4:05.69 for 6th.

Heemskerk has been as fast as 4:00.03 this season at the Budapest stop of the FINA World Cup Series.

Iron Lady Katinka Hosszu of Hungary took 2 golds in tonight’s session, first by a win by just .03 in the women’s 100m IM. Neck-and-neck with Sjostrom the entire way, world record holder Hosszu got the edge at the end, producing a time of 57.25 to Sjostrom’s 57.28. Both women’s efforts check-in among the top 20 performances of all time in the SCM version of the 100m IM.

Teen Olympian Rikako Ikee of Japan proved she can maintain pace with the big dogs in this furious sprint, registering a bronze medal-garnering effort of 58.17 to finish about a half second off of her own national record of 57.75. That mark still stands as the World Junior Record in the event.

The 100m IM field was absolutely stacked with Olympic silver medalist Siobhan-Marie O’Connor, backstroke world champion Emily Seebohm and recent 50 breast World Record breaker Alia Atkinson all in the field. O’Connor finished 4th in 58.35, while Seebohm and Atkinson earned the 5th and 6th spots with respective times of 58.94 and 59.27.

An impressive collection of female racers also comprised the 50m backstroke sprint, where former national record holder Kira Toussaint got her hand on the wall first in 26.21. The woman who dethroned Toussaint in the 50m back national record books, Kromowidjojo, touched just .03 behind in 26.24 for silver, while Seebohm doubled up on her 100m IM outing with a bronze medal her in 26.26.

One of Japan’s most popular swimmers, 2018 Olympic gold medalist Kosuke Hagino fell short of topping the podium in the men’s 400m free, as he saw Aussie Mack Horton earn the fastest time in 3:40.58. Tonight’s result checks-in as Horton’s 2nd fastest time ever, overtaking his previous SCM personal best of 3:44.77 from this summer, but falling short of the even more recent PB of 3:39.52 clocked in Eindhoven.

For Hagino, his 3:42.24 effort from this evening registers as a new personal best and his fastest since 2014. Mykhailo (Misha) Romanchuk also landed on the podium in this men’s 400m free in a mark of 3:42.63, putting the Ukrainian at 10th fastest in the world this season.

Russia doubled up on breaststroke wins on the night, with Yuliya Efimova and teammate Kirill Prigoda taking the women’s 200m breast and men’s 100m breast, respectively. Efimova finished in 2:16.29, just about a second off of her season best of 2:15.62 from Eindhoven, while Prigoda touched in 56.58, his fastest of the season. Prigoda was pushed by Japanese national record holder and Pan Pacs champion Yasuhiro Koseki, who slammed the wall just .10 behind in 56.68.

Japan’s breakout short course fly star, Takeshi Kawamoto, got the job done in the 100m sprint tonight, rocking a time of 50.28. That mark falls just shy of the 49.60 he scored for a new national record while competing at Japan’s Short Course World Championships selection meet.

It was probably 100IM SCY in mind. But it would be very funny race if to make it in 5Om pool when a swimmer has to change suddenly a stroke in the middle of the pool. The race organizers can use “invisible fence” technology to signal swimmers that it is time to change stroke. The only thing that swimmers will need is wearing some special collar.
😀

Whlle I enjoy seeing some of our biggest stars battleing out… the world cups doesn’t do it for me (and it is just not me..)…it just doesn’t … matter enough. Maybe swimming should be looking at tennis and grand slams and a season finish. Something more than money making meets …

Does it matter that 971 point result was shown in prelim race?

So Sjostrom lost 15 points to Hosszu today. The situation is getting critical to her. It looks like she competes more seriously at this stop after sloppy performance in Beijing. She was just 0.03sec short to beat Hosszu in IM event. But still she has to be really good in fly events to go better than 971. Besides her only breaststrokers can deprive Hosszu from bonus points for best performance and it may not gonna happen.