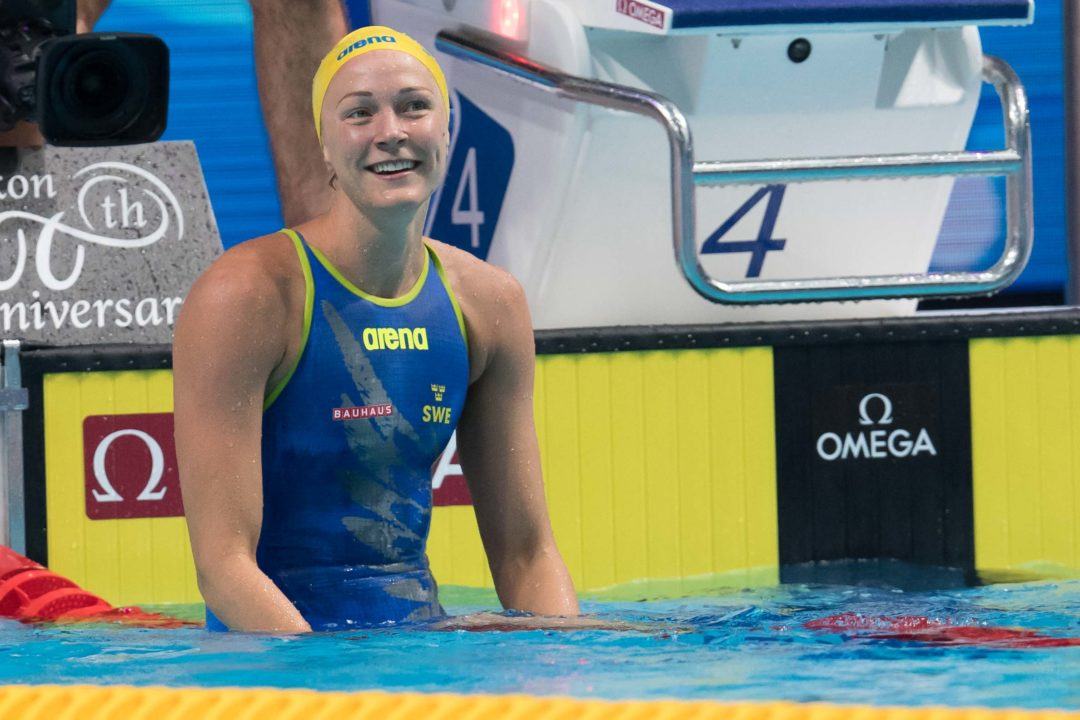 As we head into the 3rd and final cluster of the 2018 FINA World Cup Series, let's take a look at how the battle between Olympic medalists Sarah Sjostrom of Sweden and Ranomi Kromowidjojo of Netherlands has been heating up over the circuit thus far. Archive photo via Mike Lewis/Ola Vista Photography

As we head into the 3rd-and-final cluster of the 2018 FINA World Cup Series in southeast Asia, a great battle-within-the-battle is developing between Olympic medalists Sarah Sjostrom of Sweden and Ranomi Kromowidjojo of Netherlands.

Although they each race additional events, the common races between Sjostrom and Kromo have included the 50m free, 100m free and 50m fly. Comparing just the 3 aforementioned events through 4 stops, the momentum may be shifting in Kromo’s favor in the friendly rivalry.

Sjostrom kicked off her World Cup campaign with incredibly fast times, including new World Cup Records in the 50m free and 50m fly in Kazan. The Swede beat Kromo in both races, with Sjostrom clocking 23.83 to Kromo’s 24.55 in the former and 25.39 to Kromo’s 26.09 in the latter. Sjostrom also carried home the 100m free gold in 52.99, while Kromo finished in 3rd with a time of 53.71.

In Doha, Sjostrom lowered her 50m fly WC time to 25.22 en route to topping Kromo again, and also beat the Dutch ace in the 50m free and 100m free at this stop.

With a home turf advantage, Kromo started to turn the tide a bit in Eindhoven, the first stop of the second cluster. There, the 2012 Olympic double champion clocked 23.26 in the 50m free to top Sjostrom’s 23.67.

Although Kromo fell to Sjostrom in both the 100m free and 50m fly at this meet, the 2 women were even closer to one another in their results. In the 100m free, Sjostrom won in 51.21 to 51.42, while the sprint fly victory differential was even narrower, with the pair separate by only .06. Sjostrom produced 24.61 to Kromo’s 24.67.

Both Sjostrom and Kromowidjojo are included in the start lists for this week’s stop in Tokyo, so we’ll see how the races shake out as they take to the pool November 9th-11th.