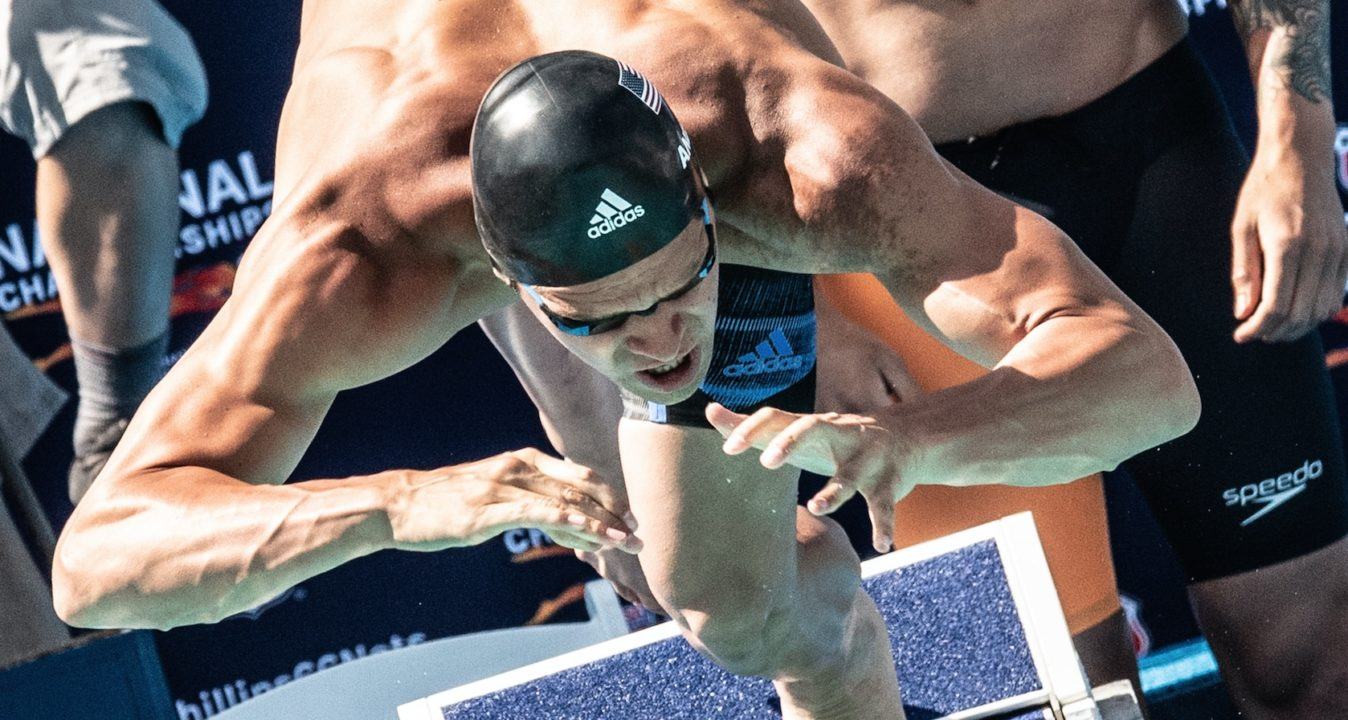 World Champion Michael Andrew has been confirmed as a participant for Energy for Swim 2018. While competing at the World Cup stop... Current photo via Mike Lewis/Ola Vista Photography

World Champion Michael Andrew has been confirmed as a participant for Energy for Swim 2018.

While competing at the World Cup stop in Beijing, Andrew was kind enough to take some time to answer a few questions about competing at Energy for Swim 2018:

1. What are you excited about coming into the Energy for Swim 2018 event?

I’m most excited for this event because it is a fresh, new, and exciting way for spectators to experience the wonderful sport of swimming. As well as a very fun format for professional swimmers to showcase and celebrate all of our hard work. I’ve heard incredible things about the Energy for Swim event from last year and I’m very much looking forward to experiencing it for myself. There’s also really good prize money up for grabs and that’s always a bonus when you swim for a living! In light of recent developments with FINA, I intend to race at the Energy For Swim 2018. I also fully support the concept of the ISL and events like the Energy For Swim. This is an exciting time to be a professional swimmer.
2. What do you think it will be like racing in a team environment over a 2-day event like this?
I’ve had very few opportunities to race in a team environment like this. Every time I’ve been able to race in a “dual meet” I come away from the meet with more appreciation for racing purely to beat the guys in your heat. It becomes more about racing for the team and not for your self and I think that’s awesome. I also will be racing for Energy Standard and have become very close with many of my teammates, and I love getting to race with them.
3. Have you raced in Torino before? What is your favorite thing about racing internationally, or in Europe specifically?
This will be my first time racing in Torino.
It’s very hard to choose one thing that I love most about racing internationally. Recently, what I’ve come to love most about racing has been the beautiful relationships formed with other athletes around the world. I’ve also had a lot of opportunities to go best times and race Short Course Meters, which we don’t really get to do in the states. Racing internationally has also become a large source of my income as a professional athlete.
4. Who are you most excited to race in Torino? What event are you most excited to race in?
At this point I’m not very certain as to what events I will be swimming. Regardless of what I swim in Torino I’m looking forward to racing with all my friends. What’s so cool about this event is that the best of the best will be there and to be a part of that field is pretty awesome. I’m just stoked to end the year with this event. Oh, and relays… that’s going to be intense!
5. Are you going to produce a behind the scene vlog to capture the excitement?
ABSOLUTELY!!!!!
“Dont forget to Like and Subscribe”
Thank you so much SWIMSWAM,
Michael Andrew

The Italian Swimming Federation announced they will organize ENERGY FOR SWIM 2018 in collaboration with the City of Torino December 20-21. However, after announcing a massive roster of over 70 international athletes, including American swimmers such as Ryan Murphy, Simone Manuel, and Matt Grevers, FINA announced a rules interpretation that could outlaw the Energy for Swim meet entirely.

“Every time I’ve been able to race in a “duel meet” I come away from the meet with more appreciation for racing purely to beat the guys in your heat. It becomes more about racing for the team and not for your self and I think that’s awesome”

Yeah that’s why nearly every swimmer from the USA swims in college. That’s why many wanted you to as well

So when are we going to get an official endorsement of this event by USA Swimming? Its seems like you cannot sit on the fence with this event. You are either in favor or against it.

do they have to?