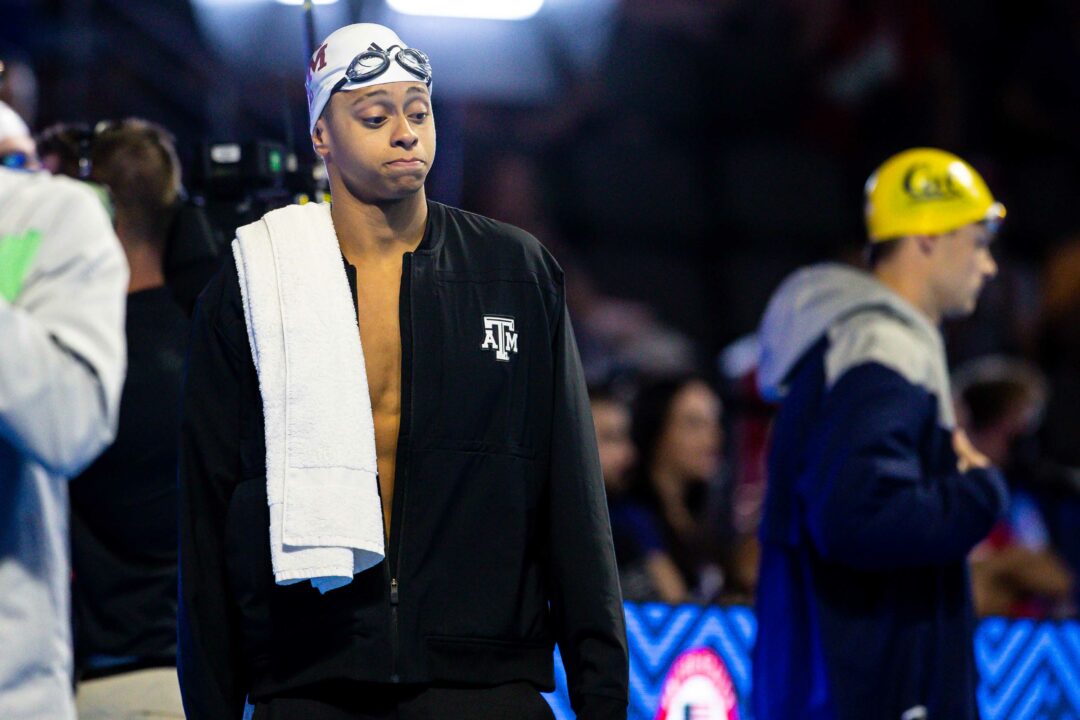 Casas's win was his third victory of the 2022 TYR Pro Swim series in San Antonio, as he previously won the 100 back and the 100 fly as well. Archive photo via Jack Spitser/Spitser Photography

On the final day of the TYR Pro Swim Series, Shaine Casas won the 200 IM with a time of 1:56.70, which propels him to the top of the world rankings for this year in the event. He set a personal best by nearly two seconds, as the fastest time he swam before today was a 1:58.54 from the Art Adamson Invitational in 2019. In addition, this time would have placed second at 2021 Olympic trials and gotten him on the U.S. Olympic team last year. It also would have been fifth at the Tokyo Olympic games.

Casas’s competition wasn’t slow by any means, either. He was going against U.S. Olympians Chase Kalisz and Michael Andrew, as well as NCAA record holder Leon Marchand. Marchand and Kalisz posted the second and fourth-fastest times in the world respectively in this race. Casas got out to an early lead, going out in a 24.59 on fly, over a second faster than everyone else. He was winning at the halfway mark, and held on during breaststroke when we thought swimmers like Marchand, Kalisz, and Andrew would catch up to him and take over. He then fought off late surges from Kalisz and Marchand to win by 0.25 seconds. Marchand was second, Kalisz was third, and Andrew was fourth.

With International Team Trials for the FINA World Championships happening in around three weeks, the men’s 200 IM could become a heated battle between Andrew, Casas, and Kalisz to see who can take the top two spots and make the worlds team.

Coming off three NCAA titles in 2021, Casas announced this fall that he would be ending his college career early to go pro. He trained with his college team, Texas A&M, up until January of 2022 and won a gold medal in the 100 back at the FINA Short Course World Championships in Abu Dhabi in December 2021. Come January, he moved to Austin to train with Eddie Reese at the University of Texas. Casas failed to make the Olympic team in 2021, and looks to qualify for his first major international long course meet this April at trials.

Casas also took titles in the 100 back and 100 fly at this San Antonio pro series.

So who guessed that Kalisz would outsplit both Casas and Marchand in the backstroke?

Jeez. These are Olympic Final times.

No Foster at this PSS?

My takeaways from looking at the splits since I didn’t get to watch the race:

-Huh, I guess Kalisz really has improved his backstroke. I remember earlier in his career when it was a liability.
-I know Marchand is a legit breaststroker, but it’s still surprising seeing someone have a faster breast split than Kalisz
-I can feel the sympathetic pain of that last 50 for Casas

that picture is *chef’s kiss*

What does this rank him all time in us and world?