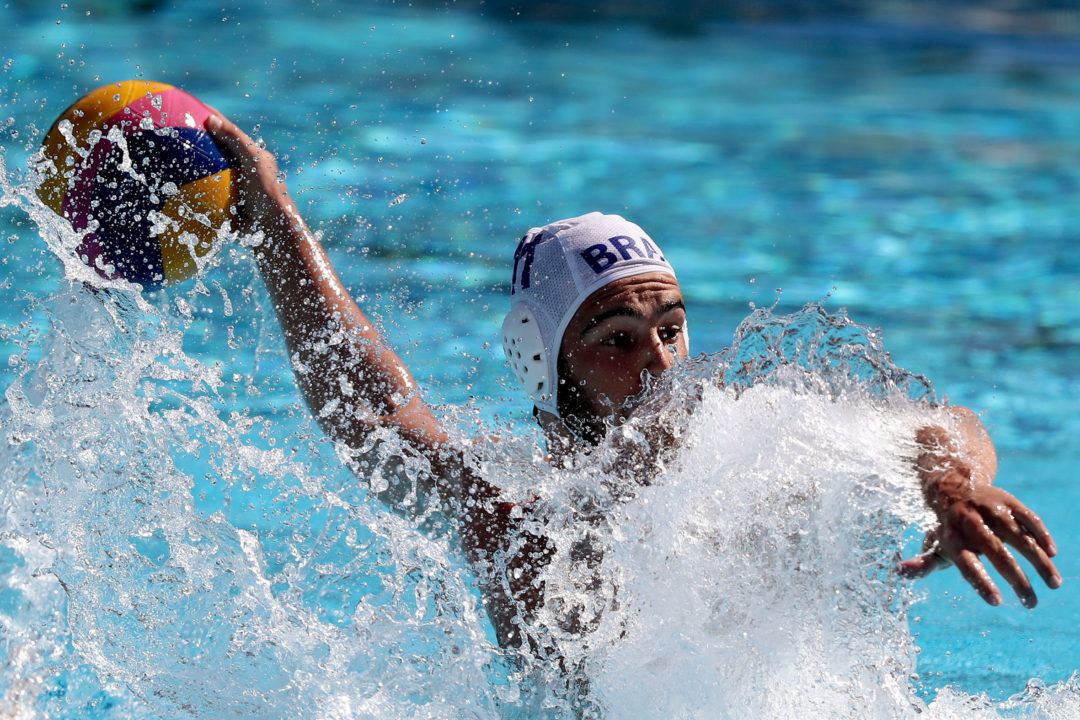 The FINA World Championships water polo group play got underway at the Alfred Hajos Pool in Budapest on Monday, with all 16 men’s teams playing their first round matches.

The match of the day had to be the draw between Canada and Montenegro, in which Canada came back from a 4-goal deficit to tie the game. Brazil beat Kazakhstan in a low-scoring, somewhat sluggish match.

Brazil came back from down 1-2 to score 5 in a row and take the first-round victory. Kazakhstan had trouble staying in the match, although goalkeeper Valeriy Shlemov had a good outing with 11 saves. Kazakhstan failed to score in a two-man-up situation, which didn’t help. Brazilian head coach Angelo Coelho said, “I have the best goalkeeper and defender. I’m very happy; it was the first game of the tournament and a victory for us, so we are motivated.”

Canada pulled off a near-impossible feat, scoring four goals in five minutes, including the equalizer with 0:21 left to play, to draw even with Montenegro. Montenegro got off to a quick start, leading 3-1 after the first quarter thanks in part to a pair of goals from Marko Petkovic. The two teams were even in the 2nd (2-2) and 3rd (1-1) before Montenegro went up 8-4 at the beginning of the 4th. Canada hung in, though, and Aria Soleimanipak scored to narrow the Montenegro lead to 8-5. Nicolas Constantin-Bicari and Reuel D’Souza added two more, then Georgios Torakis scored the equalizer.

Montenegro’s Drasko Brguljan said, “We led throughout three quarters and we had a four-goal advantage. More experienced players, like me, made a mistake. We thought we were done and let ourselves go. Canada received three man-ups at the end, while we did not get any. From now on, we will concentrate only on upcoming games since the tournament has just started.”

Canada’s head coach Giuseppe Porzio, “Montenegro is one of the best teams in the world with a great goalkeeper and brilliant players. Still we were fighting hard, we did good defense and we put big pressure on them. What matters is that we have one point against such a powerhouse team. We are a young team, but our heads were clear in the last minute. It was a nice experience for the guys, it was our first step.”

The home crowd was rewarded with a 13-3 Hungarian victory over Australia, which included a 6-0 fourth quarter. Italy overpowered France 18-9 in a very physical match with a high number of fouls called; 13 goals came from power plays.

The first half of the match was rather close. While Italy went up 5-2 in the first quarter on doubles from Vincenzo Renzuto and Francesco Di Fulvio, France won the second period on penalty shots and power play conversions. With two seconds left in the half, Thibaut Simon cut the deficit to 2 goals as France trailed 8-6 at the break.

The second half was all Italy, though; they outscored France 10-3. All in all, France scored in 6 of 10 man-up situations, while Italy was 7 for 13. Matteo Aicardi of Italy said afterwards, “We feel good here in the World Championships, but at the middle of the day the water can be really hot, so we hope that in the evening match against Hungary it will be colder and we can play better.” France’s head coach Hrvoje Hrestak, “It’s hard to lose like this. It was not a tough game physically, but we made mistakes and let the Italians make counter-attacks and we could not control it. We played better in the first and second quarter, then Italy dominated, mostly in the third quarter.”

Playing in front of a sold-out crowd of 8000, Hungary gave the boisterous fans what they had come to see: a solid victory. Australia’s Lachlan Edwards scored first, but Hungary came back with four unanswered goals, including a pair from captain Denes Varga, and left at the half leading 5-2. The third period was exciting with some near-misses from Australia and good goal keeping from Hungary’s Viktor Nagy. But the final quarter consisted of an explosion of goals from Hungary which took the score from 7-3 at the end of the third to 13-3.

Hungarian goalkeeper Nagy, who had 13 saves, said, “Playing in this pool was fantastic and very emotional as always. I think we should concentrate in every game 100 percent, and if we make it, we would reach great results at the end of the World Championships. If our defense is OK, everything is OK. Today’s performance was good.” Australia’s Lachlan Edwards, “I think we learned that we have to take care of the ball, because they capitalized from our mistakes towards the end of the game. But it was an amazing experience playing in front of this home crowd, and they really got behind them. It made the game so much better. But credit to Hungary. They’re extremely dangerous, I think they put a lot more pressure on us. They obviously turned up the intensity and we didn’t adjust to it and the scoreboard showed that.”

Greece and Spain went back and forth but Greece eked it out, scoring the winning goal with 80 seconds left to play. Serbia completely dominated South Africa in the other Group C match.

In the closest match of Day One, Greece earned a narrow win over Spain. Spain scored first, but Greece answered with four successive goals to lead 4-1 two minutes into the 2nd period. From there, Spain scored twice and Greece once, and they left for the half break with Greece up by 2, 5 to 3.

Greece pulled ahead 7-4 in the second half, but Spain answered with three unanswered goals in just over 2 minutes, and it was tied up at 7 with 3:27 left to play. Georgios Dervisis put Greece ahead with 1:20 left on the clock. Greece blocked a Spanish shot and ran out the clock for the win. Spain did not score once in 9 extra-man situations, while Greece converted 5 of 10.

Thoedorus Vlachos, head coach of Greece, “We came here to win every game. We have a different team with new players. We need more time to see in which level is my team. For now we fight every game, for every victory. To arrive at the top would be successful for us.” Spanish head coach David Martin, “I think it was a well-played match. We got close to be able to win the game. Now we have to keep going on. There are many young players in our team, who are still improving and growing, but I expect we can maintain the level.”

Serbia showed why they are Olympic, World, World Cup, World League and European champions in their opening match against South Africa. They scored six, seven, five, and three goals in the successive quarters, leaving little room for the South Africans to do much of anything.

Serbia’s Viktor Rasovic had this to say about the match, “This was my first match and my first goal in the national team in a major tournament, so I am still under the spell of it. Although the goal was the merit of the team, not me. I feel fantastic here and I hope that we continue our winning series. We tried to get our rhythm in the first quarter and we maintained it until the end. I commend my goal to my mother and to my brother. I feel very sorry that he cannot be here now, because it would have been fabulous to debut together in the team of Serbia in the world championship.” Paul Martin, South Africa’s head coach, said, “It’s always a privilege to play against Serbia. They are one of the best teams in the world. We came to this tournament as self-funded amateurs, so to play on this level is obviously very difficult. But, at times, when we played to our game plan and we played composed, relaxed water polo, we actually looked quite good out there. We did, in fact, have our little victories, and I would celebrate them rather than focusing on the bad aspects of the game.”

It was a tough match for the Americans, who play well but couldn’t match the Olympic silver medalists, Croatia. Russia jumped out to an early lead over Japan and never looked back.

Luca Cupido put the Americans on the board first, but Croatia answered with three and led 3-1 by the end of the first. Luka Loncar and Loren Fatovic gave Croatia a four-goal lead early in the second period, and the teams headed off at the half with Croatia in the lead, 7 to 3. Croatia dominated the second half as well, even though USA won the fourth period. The Americans converted 5 of 9 extra-man situations, while Croatia scored on 3 of 9.

The head coach of Team USA, Dejan Udovicic, said “Croatia definitely deserved the win. We made a lot of silly mistakes that they, as an experienced team, used against us. Playing against a team like Croatia is never an easy task. We give our best in every match that we play and every time it is a ’to be or not to be’ situation.” Croatia’s Sandro Sukno told the press, “Our start was good, which was not an easy thing, because the USA is a strong team. They couldn’t show it today, but I’m sure that they will play much better than now. We didn’t give our best, but I hope we reach it for the quarter-finals and we will play for a medal.”

Japan’s Atsuto Iida went out in the first period with three fouls, while Russia went up 5-1. Russia extended their lead by one goal in each of the next three periods. Japan’s Mitsuru Takata was sidelined in the third period with three major fouls. Russia converted 4 of 8 power plays, while Japan, just 2 of 7.

Russia’s Ivan Nagaev declared, “It was a good game. We were able to play what the coach asked us to do. We had to play disciplined against Japan, because they are a fast team, who build on counter-attacks.” Japan’s head coach, Yoji Omoto, said, “We played poorly in the first quarter and the Russians capitalized on this. We beat them in the Super Final and that was our goal today as well, but we failed. We expect an even tougher game next time against USA, because they are better physically and are faster than the Russian team.”