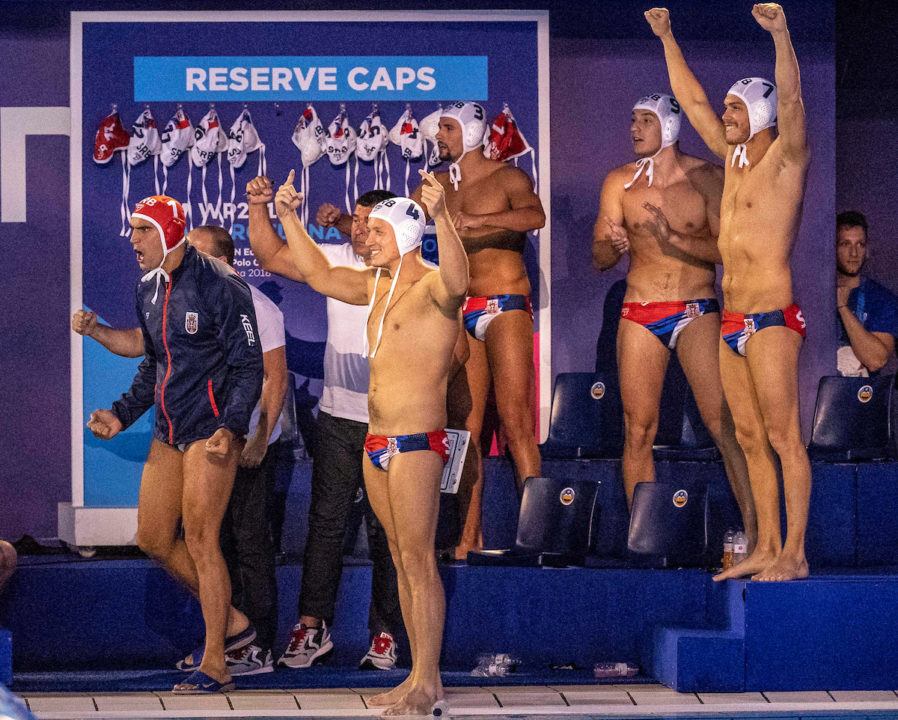 Serbia will face Croatia for the 2019 World League Super Final title on Sunday after both won their semifinal contests on Saturday. Current photo via Pasquale Mesiano/Deepbluemedia/Insidefoto

Serbia will face Croatia for the 2019 World League Super Final title on Sunday after both won their semifinal contests on Saturday.

Australia and Spain will meet with third place on the line.

Only one medalist will repeat from 2018 with Spain, last year’s bronze medalist the last in the running. Japan was fourth a year ago, Croatia fifth and Australia sixth.

Serbia put up six goals in the opening quarter and never looked back in a 16-11 win over Australia to claim its spot in the championship match.

The Serbs led 9-4 at the half and held on as each team notched seven more goals down the stretch.

It was 4-0 before the Aussies finally got on the scoreboard in the first quarter, but it was soon 6-1 after a pair of extra-man goals for Serbia. Down 7-2 early in the second period, Kayes and Younger narrowed the gap for Australia.

Serbia answered with three goals in a row over the final minute of the first half and first 90 seconds of the third quarter to go up 10-4. Australia was back within four at 11-7 heading into the final stanza as Younger, Timothy Putt and Andrew Ford found the back of the net.

The final period saw nine goals scored, five for Serbia and four for the Aussies, but a comeback looked likely through the first five minutes. Australia sliced the margin to two at 13-11 after an Aidan Roach penalty and back to back extra-man scores by Kayes. The Serbs capped the game with three straight goals by Filipovic, Nikola Jaksic and Strajina Rasovic.

“There was nothing unexpected apart from the fact the we saw a totally different approach towards applying the new rules as in the previous four days,” Australia coach Elvis Fatovic said. “This was surprising, but it doesn’t change the other fact that Serbia is a much better team and they deserved this win. We try our best to get the bronze medal tomorrow.”

Croatia surged to a 5-1 lead after the first quarter, including two extra-man goals, and held Spain at bay after building an 8-3 halftime edge to punch its ticket to the final.

Spain battled back with four goals in the third, pulling within three at 10-7 as Alberto Munarriz Egana scored twice and Alvaro Grandaos Ortega and Blai Mallarach Guell chimed in.

The Spaniards then scored the lone goal of the fourth quarter as Egana netted a counter attack shot with 5:30 to go. Croatia missed three shots and had one saved, while Spain had three shots saved and one blocked down the stretch.

Eight players scored for Croatia with Josip Vrlic and Javier Garcia putting in two apiece. Marko Bijac stopped 66.7 percent of the shots he faced (16 of 24) to hold Spain at bay.

Egana netted three goals to lead Spain, while five other players chipped in one goal each. Daniel Lopez Pinedo let in 10 of Croatia’s 16 shots on goal.

The 2018 runnerup from Hungary made up for its opening day defeat at the hands of Canada, defeating the team 15-8 in a fifth to eighth place seeding game.

It was only a two-goal game at the half (8-6) despite the Canadians having just 12 hours rest, but Hungary left little doubt, outscoring Canada 7-2 in the final 16 minutes.

Mark Kallay, Gergo Kovacs and Bence Batori each registered a hat trick for Hungary, while five others also chipped in goals. Goalkeeper David Bisztritsanyi stopped 60 percent of the shots he faced (12 of 20). Hungary was without Gergely Kardos between the pipes as he was “banned for brutality after a video review.”

Hungarian netted nearly half of its shots (15 of 31), including eight of 12 extra-man opportunities and its lone penalty.

Canada, meanwhile, hit on just eight of 30 shot attempts, making good on both of its penalties, but converting just one of nine extra-man tries.

With the game well in hand, Hungary made history as Bisztritsanyi crossed the midline to run the offence (a previously forbidden activity until a recent rule change) and set up a 7-on-6 score by Batori with less than a minute to play. It was the first at a major FINA event.

“The players delivered the plan quite precisely,” Hungarian coach Tamas Marcz said. “We wanted to start with a heavy pressing to tire a bit the Canadians, then switch to the zone defense in the second half and it worked, as the progress of the match mirrors it. We wanted to prove that Day 1 was just a one-off derailing, not more and I think we showed our quality today.”

Kazakhstan scored its most goals of the tournament and outscored Japan 8-5 in the second half, coming up just short in a 13-12 loss.

Kazakhstan was the more efficient side, making 12 of 23 shots (52.2 percent), including al three of its penalty tries. The team converted just three of nine extra-man opportunities.

Japan put in 13 of 32 shots, making good on six of 13 extra-man chances and its lone penalty.

Murat Shakenov led the way with four scores for Kazakhstan, while Miras Aubakirov notched three goals. The Kazaks used two goalkeepers in the game, with Madikhan Makhmetov stopping 44.4 percent of the shots he faced (4 of 9) and Valeriy Shlemov grabbing 3 of 10 (30 percent).

Down 13-8 with 4:30 to play, Kazakhstan mounted a comeback. Shakenov put in two action shot goals (4:19, 2:37), Aubakirov netted a penalty with 2:04 to play and Mikhail Ruday had the team within one with 29 seconds left, but that would be the last shot of the game.

“For us these games offer the chance to play a tight match with a chance, not the games like the ones against Serbia or Croatia, even Australia is above our level,” Kazakhstan coach Dejan Stanojevic said. “What makes me satisfied that we are growing, improving step by step. We are constructing this team through tournaments like this. Also, because of the Asian events, we perhaps know Japan better, the players know what are the best tools to play an even match with them. We had some chances today, what made the difference was the man-down. We should have not let them shoot from the left side, positions 1 and 2 but we couldn’t apply that really successfully and conceded goals from those positions.”