Sarah Sjostrom Leads Off Relay With Fourth Fastest 200 Free Ever 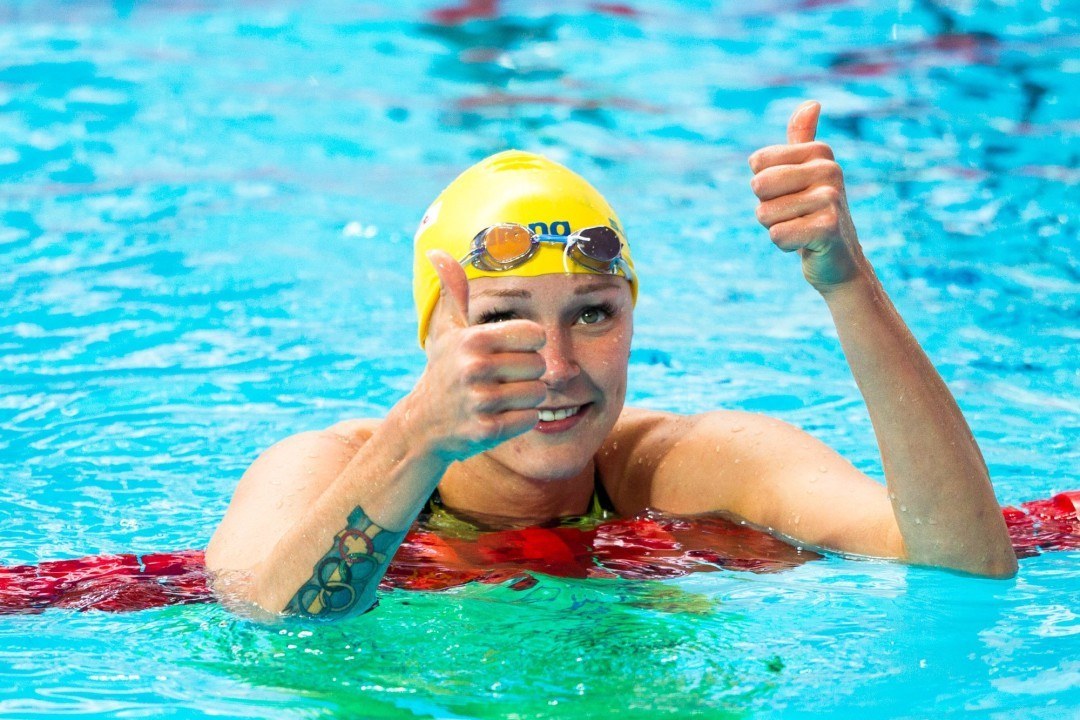 Sjostrom put the Swedes into first after her performance, touching the wall in 1:54.31. Her closest competitor was 200m freestyle bronze medallist Missy Franklin of the United States in 1:55.95.

Her time beats Allison Schmitt’s 1:54.40 as the fourth fastest 200m free of all time. It’s also the second fastest textile 200m freestyle ever behind only Schmitt’s 1:53.61 winning time from the 2012 London Olympic Games.

It also moves Sjostrom to the third best performer ever in the event behind only Frederica Pellegrini and Schmitt. Pellegrini holds the fastest and third fastest 200m freestyles at 1:52.98 and 1:53.67.

With her 1:54.31, Sjostrom would have won the individual 200m freestyle final at these world championships by almost a full second. The gold medal went to Katie Ledecky of the United States in 1:55.16. Ledecky was in the same 4x200m freestyle relay race as Sjostrom, anchoring the American team to a gold medal.

The Swedish team led for the first 600-meters, but they were passed almost immediately as Ledecky entered the pool.

Putting their best swimmers on the front half of their relay, Ida Marko-Varga of Sweden was passed by both Frederica Pellegrini of Italy and Duo Shen of China, leaving the Swedes off the podium and settling for fourth.

At the touch the Swedish team was a 7:49.10 following Marko-Varga’s two-minute split. Marko-Varga has been a 1:58.2 in the 200m freestyle, although she hasn’t been close to that time since the 2008 Beijing Olympics.

It was a statement swim to let the ladies know that even though she wasn’t in the 200m Free to make no mistake…she is the fastest woman in the world at that distance.

Yea. I mean it was literally a no pressure situation, the other top swimmers were swimming their 4th 200 free of the meet, and she was doing her first. And Ledecky had already done 2 1500m WR swims, 2 400m swims, one being a CR, and 3 200 meter swims, winning the individual. But yea, she should be considered the undoubted best in the world in this event. Also, Ryan Murphy should be considered the best 100 backstroker obviously.

This is a FINA event. It is not ratifiable for one of the dumbest reasons. Popovs record shouldn’t have counted by that standard.

This one’s not getting settled before Rio but if they were head-to-head without other swims in the same session, are you really putting your $ on Ledecky? I’d book it at 3-1, maybe 4-1.

Yes. I would. Sjostrom has not proved herself one bit in the 200 free racing against ACTUAL competition. She has done her swims in situations where there is no pressure, either because the competition is so easy that she could win the race with a broken leg, OR, in this case, her team has no shot to win so she just lets it fly. Ledecky wasn’t even considered a podium favorite against the likes of Franklin, Heemskerk, and Pellegrini. Remember, Pellegrini was not able to produce her best in this final( her textile best of 1:55.00 was done THIS YEAR) and she is (rightfully) considered he GOAT in this event. People think sjostrom could repeat 1:54 low when not even… Read more »

Nice to see an acknowledgement of Pellegrini as the GOAT in the 200free. It takes one to know one.

#PVDH, your statement that Sjostrom “has not proven herself […]

against ACTUAL competition” is pretty ignorant. Since 2014, she’s been litterally unbeatable at 200m and held had the fastest yearly times both on long and short courses. Her huge improvement on your goats previous world record at the 2014 World Championship should be an indication. So even as Ledecky becomes more and more competitive at 200m, there’s still no question on who was the faster 200m swimmer in Kazan!

As for 400m freestyle, Sjostrom’s results actually do indicate she would be competitive with just a bit of dedicated practice (though I doubt this dream will ever come to fruition).

Geez, that’s easy to discount it as a “no pressure” situation especially considering her time was 0.85 s faster – near a full second faster. By that standard, one should ignore the 1:54.77 she swam earlier in the year. People, give credit where it’s due! Sjostrom’s 200 free has been faster than Ledecky’s at any point you look at. One thing that can be said for Sjostrom – she actually improved on her best time while Ledecky only tied hers. Yes, there’s something to be said for the pressure of a final, but still! Sjostrom’s speed is a pretty good indicator that she’ll be sub 1:54 in Rio. Not too many girls will follow in that category. Possibly Ledecky, but… Read more »

I’m not saying ANYTHING about sjostroms sprinting. In that she is the best, even against the best competition. But adding 3 200 meter swims for a sprinter is not ideal. Even if she can go the fastest time in a one off event.

Why exactly does FINA not recognize a relay lead off swim?

The no pressure argument is unfair when you consider that no one had such comments about Franklin’s lead off in 2011.

I was very critical of Sjostrom skipping the 200, I think she would’ve won in a 1:54.5-1:54.8 despite “pressure” (soemthing she took care of very well earlier this week). On paper, I see Sjostrom as the favorite in the 100 tomorrow. her time drops in her other events suggests to… Read more »

Sarah sjostrom has already swum a 1:54 individually and 1:53 off a relay flying start so she is a proven performer in the 200 free. Aside from that 52.18 split in a “mixed medley” relay by Ryan Murphy, he hasn,t really proven himself individually. By the way the mixed medley relay is different from the traditional medley relay.

And similar to this, they were low pressure situations. She wouldn’t be able to fit 3 200 freestyles and still deliver 54 low.

LIke I say it won’t be settled before next year (if then) but I disagree… She’s a multiple world champion so can’t say she’s untested when it comes to pressure. It’s fair to question if she can maintain speed through 3 rounds of 200s but I don’t think she’d have to exert herself too much to make the final. We shall see…. She’s not as ridiculously resilient as Ledecky (no one is) and she’ll have to balance the demands of the rest of the schedule.

The difference is that Missy’s been heading mostly in the wrong direction in the 200 free since 2011. Sjostrom’s been making gradual improvements.

The last WC, she did enter 200 and she improved her times by every race, going faster in the semis, and even faster in the finals. But then Sarah was not the swimmer she is today so she came in fourth. But if she would have raced 200 in this WC I really think that she would have won it. Today she had two 100 races and one 200 in her before going 1.54,31. That’s something

I mentioned this in the main finals thread — while Ledecky swam a phenomenal race and showed us all that there are no limits to her fierceness (even in races in which she is an “underdog”), I’m confident Sjostrom would have won the 200 had she swum it. Of course we’ll never know, and I’m really happy that Katie won since it keeps her astonishing streak of international golds alive, but consider:

The final, although slower than everyone was hoping for, wasn’t too surprising given how each of the contenders is performing at this meet.

The top 3 times were faster than what anyone else swam throughout the qualifying rounds.
Heemskerk seems to be a little off here —… Read more »

Oops, forgot to mention that Pellegrini’s time, while off her season- and textile-best, was only marginally so.

Fundamentally, whether a fan wants to see Sjostrom swim a 200free in a major competition boils down to 1 question- do they rather see her win the 200free or the 100free. I’m sure Sarah’s answer is the 100free. That’s why she chose not to swim the 200. Coming into this meet, I’m sure Sarah knew she had a good shot of winning the 200free, but made the conscious decision to not swim it because to her a 100free gold > 200free gold + 100free minor medal/no medal.

The Campbells mean business and based on the legacy Sarah wants to set for herself, unless she is confident of throwing down a 51 100free, she’d rather not risk it.

Let me just out this out there, If Sarah breaks the 100free WR and wins of her remaining 3 events, I would consider her the female swimmer of the year over Ledecky– especially if she ends the year with top ranked swims in 5 events.

I was wondering about the Swimmer of the Year award too. Lots of hypotheticals, obviously, but let’s assume Sarah and Katie win the rest of their events. I wonder if the award comes down to the medal from the 200, and thus not racing might cost Sarah the award. (Not that it was necessarily a bad decision; in fact, it was rather brave to recognize her potential limits and not overextend herself.)

Sarah winning 50 free is a longshot so I wouldn’t worry about it, but 50/100 free, 50/100 fly would obviously be >> 200, 400, 800, 1500. Only marquee event of the latter is the 200, the former has at least two. That’s nothing against Ledecky though, you can’t do more than winning what you swim, she’s an incredible athlete and it wouldn’t surprise me if she one day medals in the 100 too. I’m thinking Sarah takes two golds(fly events), one silver(100 free) and bronze or no medal in the 50 free here. Which will be an incredible meet for her, but Ledecky will be the queen of the championships for going 5/5.

The thing about Sarah being rested and… Read more »

It makes no sense to say Sarah would have won the 200 free. She was not there and we will never know how she would have handled it (assuming she got into the final and did not do an Efimova). Nor we will know how the other swimmers would have reacted to her race, how the different lane disposition would have affected their swimming, and so on. It is however true that she would have added to the thrill of the race.

clearly it’s just people speculating and obviously no one knows for sure, but I think there is a strong argument to be made that she could have won that race had she entered it.