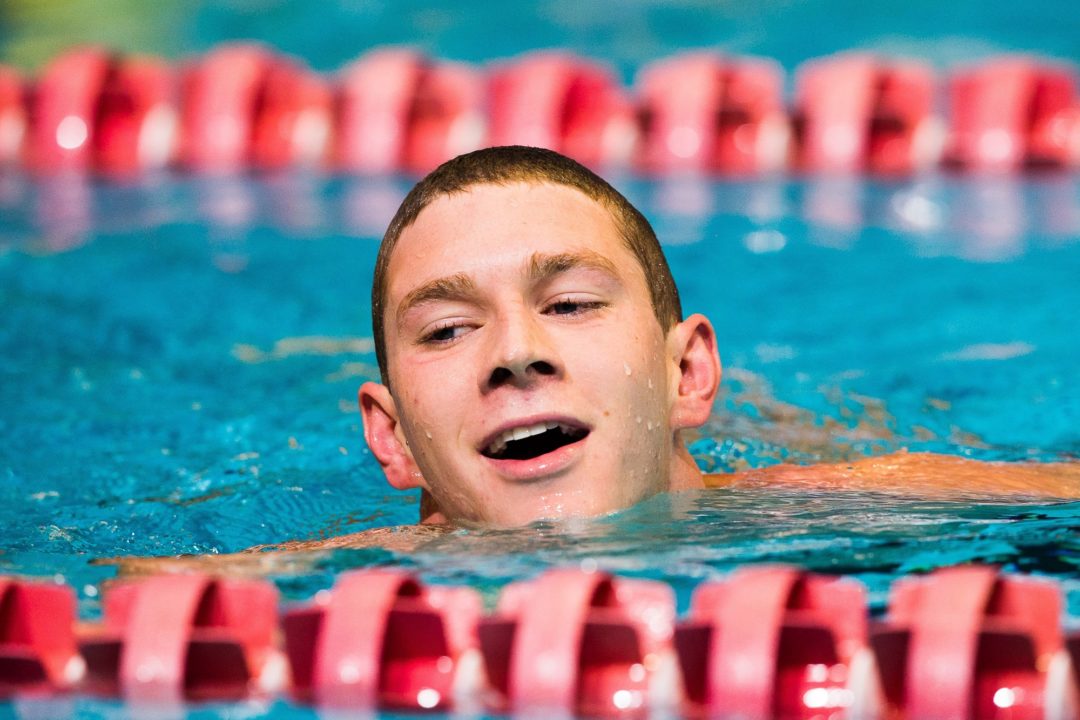 Cal's Ryan Murphy is in fine form as he barrels toward his first Pac-12 Championship meet in 3 weeks. Archive photo via Tim Binning/TheSwimPictures.com

The men of Cal, with their eyes on a potential NCAA Championship in March, made a big statement in Los Angeles on Friday with a 174-125 win over the USC Trojans at the almost-unveiled remodeled Uytengsu Aquatics Center.

The Cal men kicked the meet off with a 1:27.00-1:27.95 win over USC in the 200 yard medley relay. That difference came in the long axis strokes, where Cal got a split of 21.80 lead-off backstroke from Ryan Murphy and a 19.49 anchor from Tyler Messerschmidt.

The next event, the men’s 1000 free, was the best race of the entire night. Cal’s Jeremy Bagshaw and USC’s Cristian Quintero matched up in the race. Bagshaw is an All-American, and so far from an ‘unknown,’ but doesn’t have quite the resume from last season as Quintero does.

But both swimmers have had a great season so far, and so their shootout was no surprise. The two bounced back-and-forth, and came out within three-tenths of a second of each other on the first 17 (out of 20) splits of the race.

Then things got really interesting. Quintero moved first and got a little bit of separation. He held that separation for 100 yards, but then in the final 50, Bagshaw roared home to take the win, 9:02.19-9:02.24.

Cal went 1-2 in the men’s 100 backstroke. Freshman Ryan Murphy’s time of 46.95 was really impressive. Murphy now has the two fastest times of the spring semester nationally.

USC’s Dylan Carter is having an immediate impact on their team after officially beginning NCAA competition this semester; he was 3rd in 48.86 to stop a Cal podium sweep.

Likewise, Chuck Katis has made an immediate impact for Cal in the breaststroke events after joining the team mid-season. He won the 100 breast by a full second with a 54.70.  USC’s Morten Klarskov was 2nd in 55.73, to hold off Cal’s Josh Prenot (55.88) who not surprisingly had a very strong back-half.

Marcin Tarczynski won the 200 fly for Cal in 1:45.79. Though they graduated last year’s NCAA Champion Tom Shields in this race, the Golden Bears’ 200 fly group is still strong: they took three of the top four spots in this event. Will Hamilton was 3rd in 1:47.36; he’s also a former NCAA Champion in the race. Interrupting that near-sweep was USC’s Cary Wright in 2nd in 1:47.30.

There appears to have been an error in the 50 free lane assignments, so it’s difficult to report on that until more accurate results are found.

Bagshaw would join Murphy with a second time on top of the podium thanks to a 4:21.19 in the 500 free as Cal began to pull away in the team scoring. Quintero wasn’t as competitive here as he was in the 1000 earlier, swimming only a 4:29.06.

By the time the 400 free relay came around, the team score had gotten well out of hand, but USC still got one last, very fast, shot in with a 2:56.13 in the 400 free relay over Cal’s 2:56.45. Both teams had splendid anchors – for USC, it was a 43.6 from Dimitri Colupaev, and for Cal it was a 43.6 from Seth Stubblefield. Cal actually had the two fastest splits of the field (Murphy was a 43.50), but USC was an overall much more balanced foursome.