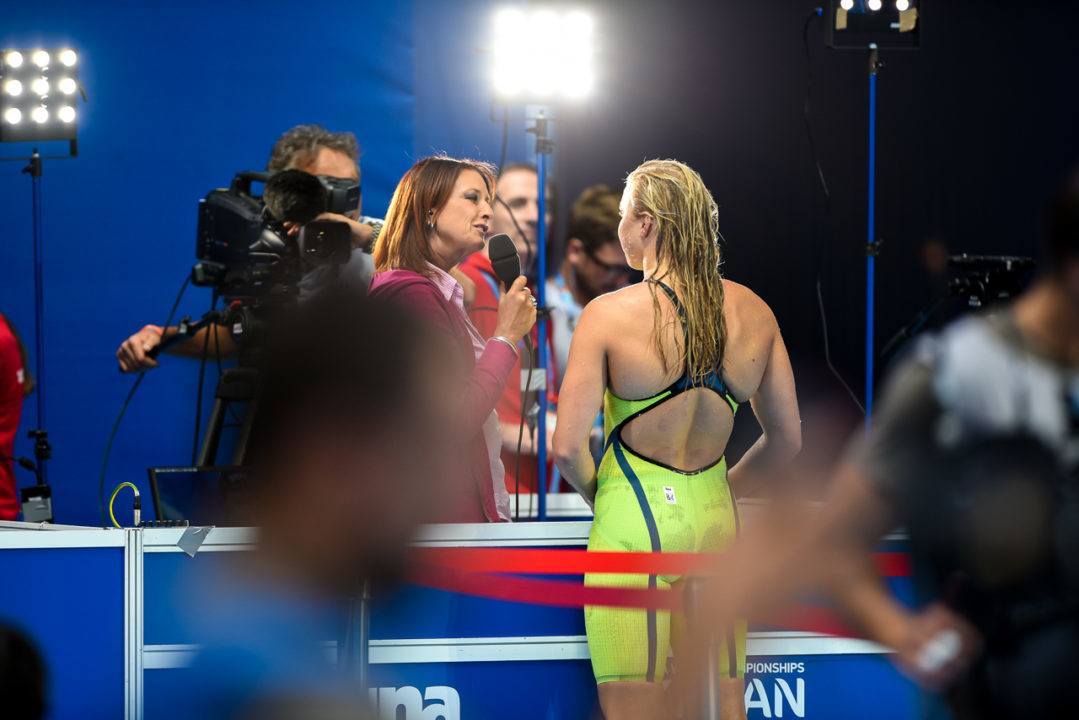 Rūta Meilutytė set the bar high for young Lithuanian girls when she touched the wall first back in 2012 at... Stock photo via Peter Sukenik/www.petersukenik.com

Rūta Meilutytė set the bar high for young Lithuanian girls when she touched the wall first back in 2012 at the London Olympics.  Everyone remember that gold medal swim from lane 4 five years ago?  The louder statement swims might have been the prelim swim of 1:05.56 in prelims followed by 1:05.21 in the semis. Any of us who had penciled in Soni or Yulia for gold that night have wondered how a young girl from a nontraditional swimming nation could pull this off.  Wasn’t she supposed to wilt under the glare of the bright lights?   Let’s all agree it was impressive.

Following that meet Ruta became a high wattage swimming superstar recognizable in and out of swimming pools everywhere.  The impact that this has on a country isn’t immediately measurable but it certainly re-engineers the dreams young swimmers have after they see something that was thought to be undoable.  You probably haven’t heard of Kotryna Teterevkova or Agne Seleikaite but these two Lithuanian girls, ages 15 and 16, are two breaststrokers who are starting to show that Ruta isn’t the only one in the country who can swim this stroke.  Teterevkova swam a 31.90 scm breaststroke earlier this month and Seleikaite swam a 32.14 LCM breaststroke last month in Poland and a 32 flat SCM.  Setting the world on fire?  Perhaps not yet, but these two teenagers were 10 and 11 when Ruta won gold in London and no one other than Ruta had ever accomplished a sub 32 before these two.

Watching one of your own do something like Ruta did spark something inside some people.  Dreams become bigger and impressionable people start to believe inside that they can do the same.  Why not me? Ruta did it…I saw it.  Inner dialogue change, goals get amped up, an athlete’s nutrition game is improved and things get taken a lot more seriously once that impossible dream is sparked. And this happens immediately.  This is how high performing 10 year olds think and don’t try telling them their dreams are unachievable.  USA has a zillion role models for their 10 year olds to look up to.  I’ve watched Missy Franklin, Elizabeth Beisel and Breeja Larson stick around forever after meets signing autographs and taking selfies with the tween cohort and they’re really good at it.  Lithuania doesn’t have that many but Ruta carries her country’s flag well.

I remember sitting home watching the Beijing Olympic trials and watching Lindsay Seemann make the Canadian team as a 15 year old.  She was the youngest on the team and I clearly remember having my I-can-do-that-too moment.  Seemann had a so-so Olympics and isn’t a household name in our sport but she went on to graduate from the University of Iowa and by any reasonable person’s metric achieved a lot in the pool.  Lithuania has Ruta and I bet we continue to see more breaststrokers from that part of the world.

I hope Rita gets back her groove also even if I don’t know who she is .

How reliable are your sources??? hmm

Great article! Shows that dreams can come true if you put in the time and effort to achieve them.