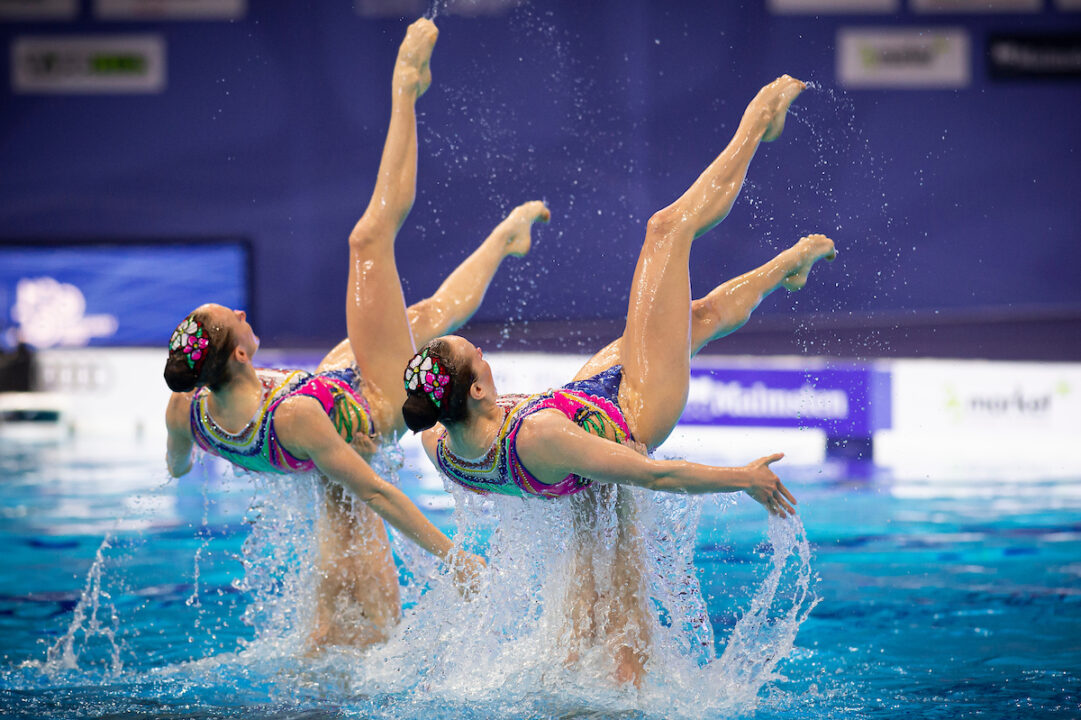 Russia has topped the artistic swimming medals table after a successful run at the European Aquatics Championships in Budapest, Hungary.

Day one of competition delivered the first gold medal for the nation as Aleksandr Maltsev and Mayya Gurbandiyeva dominated the mixed duet technical final, winning with 91.7963 points.

Their nearest challengers were Spain’s Emma Garcia and Pau Ribes who clinched silver with 84.8694 points while third-place went to Nicolo Ogliari and Isotta Sportelli from Italy (77.4281 points).

A technical fault during the first day of the championships forced the duet technical final to be rescheduled to Thursday, May 13th at 9 am. To accommodate the change, the team free prelims (which were due to take place on Thursday morning) were cancelled as there were 8 teams entered who would, by default, all qualify for the final regardless.

Marta Fiedina of Ukraine earned her first medal of the competition in the solo tech final on the second day of the meet as she gained 91.8445 points for her routine and secured Ukraine’s first medal of the week.  The 19-year-old also holds a gold medal from the 2018 edition of the event which she won in the free combination team event.

Behind her was Greece’s Evangelia Platanioti who took the silver medal spot with 89.2897 points and third went to Vasilina Khandoshka of Belarus (87.7173).

Spain get another podium finish – Day 3

Wednesday, May 12th saw two finals: the solo free and team technical final. In the former, a high score for both artistic impression and difficulty secured the gold medal for Varvara Subbotina (Russia – 96.4333 points) over winner of the solo tech final, Marta Fiedina (Ukraine – 93.7000).

20-year-old Subbotina holds a number of gold medals from the 2018 European Championships and 2019 World Championships across individual, duet, and team events. Her win in the solo free is her first senior European title for this event.

A second medal for Greece – who took home a total of 3 medals throughout these championships – was won by 2012 and 2016 Olympian Evangelia Platanioti.

The team technical final featured traditional Russian music as the backdrop for the gold-medal standard routine the Russian team performed. Adding to their tally and continuing their dominating performance, the team racked up 96.6705 points to beat out Ukraine who secured silver with 92.3920 points. Bronze went to the team from Spain with 89.7700 points.

The previously mentioned schedule change didn’t stop the Russian pair of Svetlana Kolesnichenko and Svetlana Romashina from swimming a winning performance in the duet technical final.

Two of the Alexandri triplets (Anna Maria and Eirini) delivered Austria’s first medal in this discipline in 34 years by winning bronze in the duet tech final. Their 80’s-themed routine earned them a total of 85.4952 points, which was enough to deny Belarus a podium finish (88.1958).

Additionally, Ukraine managed to retain their 2018 title in the free combination final as they won gold with 94.7000 points. In second place was the team from Greece with 89.1000 points, and in third was Belarus with 86.0667 points.

Kolesnichenko and Romashina had a historic win in the duet free final on day 5 of competition as a perfect 10 score appeared on the scoreboard – the first 10.0 to be awarded at a European Championships in 11 years.

The two artistic swimming veterans – who each won multiple gold medals at the World Championships in Gwangju, South Korea in 2019 – stormed to a win with 97.9000 points in the event.

The team free final delivered an expected first and second-place finish for Ukraine and Spain respectively, but it was Israel’s performance that sent shockwaves through the Duna Arena.

The final day of competition saw the final of the highlights routine being performed, an event which was added to the international calendar by FINA in 2017.

Ukraine came away with the win with 95.3000 points while Belarus (86.5667) and Hungary (79.1000) took the silver and bronze medals home to bring the artistic swimming leg of the European Aquatics Championships to a close.