Rio 2016 Olympic Preview: Phelps Out For Redemption In Men’s 200 Fly 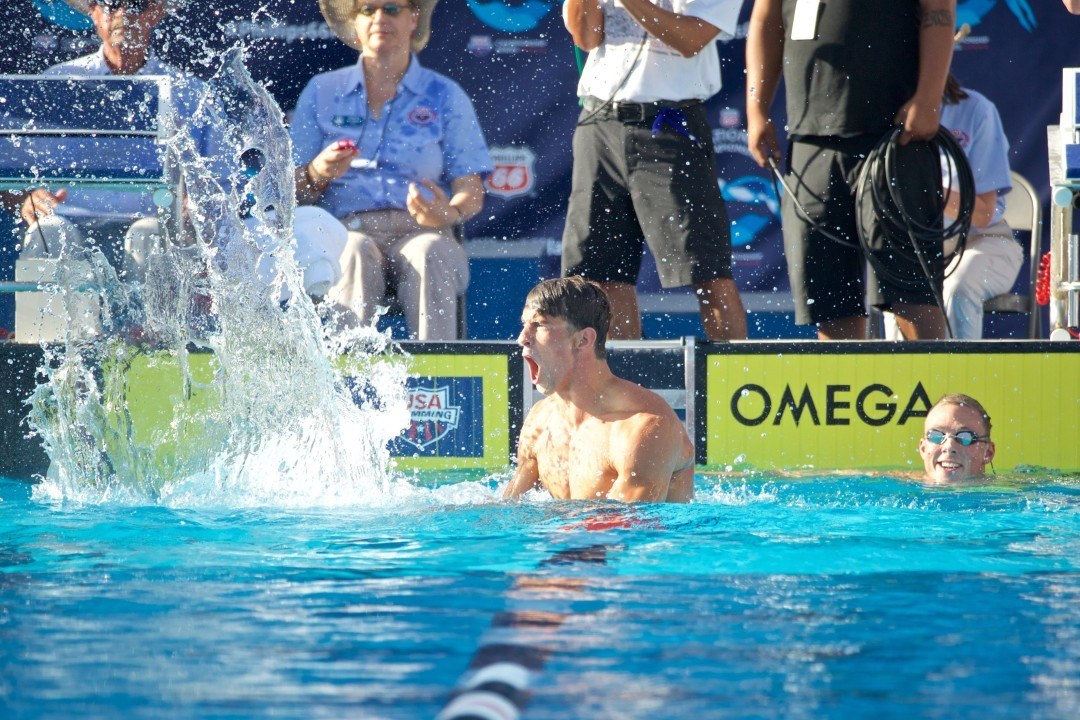 Michael Phelps' performances last year at US Nationals in San Antonio set up an epic battle that will take place in Rio next week with him, Chad Le Clos and Laszlo Cseh all vying for Olympic gold in the 200 fly. Current photo via Rafael Domeyko/Domeyko Photography

Like the 100 fly, the men’s 200 fly sets up to be an epic battle between three men: Michael Phelps, Chad Le Clos and Laszlo Cseh. Sure, others figure to be fast and maybe bump one of those guys out of the medals in either event, but these three will possess the majority of the focus. Not only are they the three fastest in the world over the last year, but they’re the only three who have gone under 1:54 since the 2012 Olympics, and they all have previous history with one another.

Le Clos famously out-touched Phelps for gold in 2012, denying him of his record third straight Olympic gold in the event. He then had some choice words for Phelps after winning the 100m World title last year, providing a spark in the rivalry. Phelps and Cseh go way back, as Phelps has overshadowed Cseh for the last 13 years denying him gold on the big stage countless times, including three at the Beijing Olympics in 2008. Le Clos and Cseh have had a few clashes as well, trading gold and silver medal performances last year in Kazan in the fly events and Le Clos also won gold over Cseh’s silver at the 2013 Worlds in the 100 fly. In Cseh’s career he has eight silver medals from either the Olympics or World Championships, and seven of those times the gold has gone to either Phelps or Le Clos. Could he finally avenge those losses taking out both men on the biggest stage of all? He certainly has a great shot.

Laszlo Cseh was in fine form at the European Championships, clocking a world best 1:52.91 in the 200 fly (Peter Sukenik).

Cseh leads the 2016 world rankings with his time of 1:52.91 from the European Championships, well ahead of anyone else in 2016. After that swim Cseh was quoted as saying “If I arrived to Rio in this shape I would be utterly disappointed”, pretty scary considering that was the fastest time anyone has done since the suits were banned in 2009. If someone were to look at the results of the last few years having no knowledge of the swimmers involved or their previous accomplishments, logic points to Cseh to be the victor in Rio. He’s the 2015 World Champion and the fastest man in the world this year, but he’ll need some serious firepower to get by both world record holder Phelps and defending Olympic champ Le Clos.

Phelps was seemingly done with this event until he began swimming it in the lead up to US Nationals last summer, where he dropped the top time of the year in 1:52.94. He was just 1:54.84 at US Trials last month, but you can expect him to be much faster in Rio. Once Phelps put his troubles in late 2014 behind and began to put everything into training, the loss to Le Clos four years ago certainly must’ve been part of the motivation to pick the event up one last time.

After winning 2012 gold in this event Le Clos continued his international success, winning double gold at the 2013 World Championships before going on an unbelievable tear in late 2014, going undefeated on the World Cup Circuit and appearing unbeatable in the short course pool. He continued that streak right through the end of 2014, going 4-for-4 at the Short Course World Championships. With all that success it was somewhat of a surprise that he didn’t find more success at the 2015 World Championships, despite still coming away with two medals. Le Clos failed to make the final of the 50 fly and was defeated by Cseh in the 200 fly. Along with that, he was forced to eat his words after Phelps beat his gold medal winning time in the 100 fly later that same day in San Antonio. The story lines are aplenty in this race, and these guys are going to put on a show. Le Clos’ recent release of the documentary ‘Unbelievable’ only adds to the drama in the lead-up to this race, as he references how badly he wants to beat Phelps again in this race specifically many times.

After those three, there figures to be a bit of a gap followed by plenty of men who will battle it out for a spot in the final and then spots four through eight in the final. The Japanese combo of Daiya Seto and Masato Sakai figure to be in the thick of that race, as they put up times of 1:54.1 and 1:54.2 respectively at Japan’s Olympic Trials earlier this year. Seto has proved his consistency in this event with six swims of 1:54-something over the last two years, despite a somewhat underwhelming 6th place finish last year in Kazan. Sakai swam a pair of personal bests in Kazan to finish 4th in 1:54.24, and improved that time by three one-hundredths earlier this year. Both have proved their capability to swim multiple 1:54s, but will likely need to dip below that to contend for a medal, despite the fact they sit 2nd and 3rd in the world for 2016.

The other finalists from Kazan last year, Jan Switkowski, Viktor Bromer, Louis Croenen and Tom Shields, will be all in the fight for a spot in the final, though it won’t be easy. Bromer is the highest ranked among them this year at 7th, while Shields is 12th, 2015 bronze medalist Switkowski is 15th and Croenen is 25th. Experience will be in their corner over some of their challengers, but they’ll have to execute perfect races in the semis to ensure a spot in the final.

A few who will look to turn some heads in Rio are Tamas Kenderesi of Hungary, Li Zhuhao of China and David Morgan of Australia. Kenderesi, who didn’t even compete last year in Kazan, won bronze at the European Championships in May and has been 1:54.79 twice in the last year, ranking him 5th in the world for 2016. Li, who also didn’t compete in this event in Kazan but was a finalist in the 100 fly, threw down a junior world record of 1:55.52 last September and was just two-hundredths slower at Chinese

American Tom Shields will need to be right around his personal best to ensure a spot in the final 8 in Rio (Mike Lewis).

Nationals this year. Morgan had a disappointing semi-final swim last year in Kazan to miss the final, but swam a best time of 1:55.63 to win the Aussie Trials and put himself in the hunt.

This event has three men who have separated themselves, at least on paper, followed by a logjam of men who could final or miss the semis depending on how they perform in Rio. Phelps’ competitive edge has led him to wins where it seemed impossible (2004 100 fly over Crocker, 2008/2009 100 fly over Cavic), and what he threw down last summer was truly remarkable after the year he had. He could have some magic left in him, though both him and Cseh are at a disadvantage being much older than Le Clos. That might just tip the scales in Le Clos’ favor. Behind them it’s tight, but the Japanese men have proven their consistency and the young Europeans are on the rise.

Others who will look to make their way into the conversation include Leonardo de Deus (BRA), Grant Irvine (AUS), Kaio Almeida (BRA)  and Zheng Wen Quah (SIN).

Dark Horse: Joseph Schooling, the winner of two consecutive NCAA titles in this event and the current NCAA record holder, is a question mark at this point as he has pondered dropping this event in favor of the 100 free, though he is entered in both for Rio. If he opts to swim it, his marked improvement in the SCY version of the event make him a definite contender for a finals berth, not to mention he has already proved himself in the LC pool in the 100m distance winning bronze in Kazan last summer.

A lot will depend, I think, on what it takes to final and which lanes they end up in. The win might go to whoever achieves the best balance of conserving energy in the semi and securing the right lane for the final. It’s hard to say who benefits most from having all three favorites in the center of the pool together. Le Clos may be the best pure racer of the three; certainly he’s raced the most over the last 6 years. Phelps is an incredible racer who draws motivation from his opponents; he can’t afford to be in lanes 1 or 8, but he might benefit by not being right next to Chad, who will turn his head… Read more »

For Phelps, it may be worth noting that aside from London, Le Clos’s fastest butterfly races have been ones he’s led pretty much from the start. As far as I can remember, at least.

Still better than what they predicted.

If I had to give a Male Swimmer of the Year for 2016 so far, I’d give it to Cseh. His 1:52.9 probably not fully tapered should scare the 2 butterfly beasts. However, Phelps and Chad, arguably the 2 best racers in the sport, aren’t gonna let Cseh have it easily.
MY PREDICTION
1. Lazlo Cseh for the gold
Phelps and Le Clos make up ground on the last 50, but not enough to take down the Hungarian
2. Chad
3. MP, his worst placing in this event since 2000

Agree. Same for me.

3
0
Reply
SwimmerFoxJet
Reply to  Will

1. Cseh he is hungry for an olympic gold, fastest since 2007 if you exclude 2008 and 2009, he did that this year and he is a veteran, so he likely didn’t pick euros to peak. 2. Le Clos he has such potential that he is still yet to realize, as he’s been cocky since London. He has humbled a bit since 2015, and I think he will do very good in Rio. 3. Phelps I’m not being a doubter here, this is not a fairy tale however, and I dont see him dropping that much time from his US Nationals times last year with the exception of the IM, where his free could improve a lot. Phelps puts up… Read more »