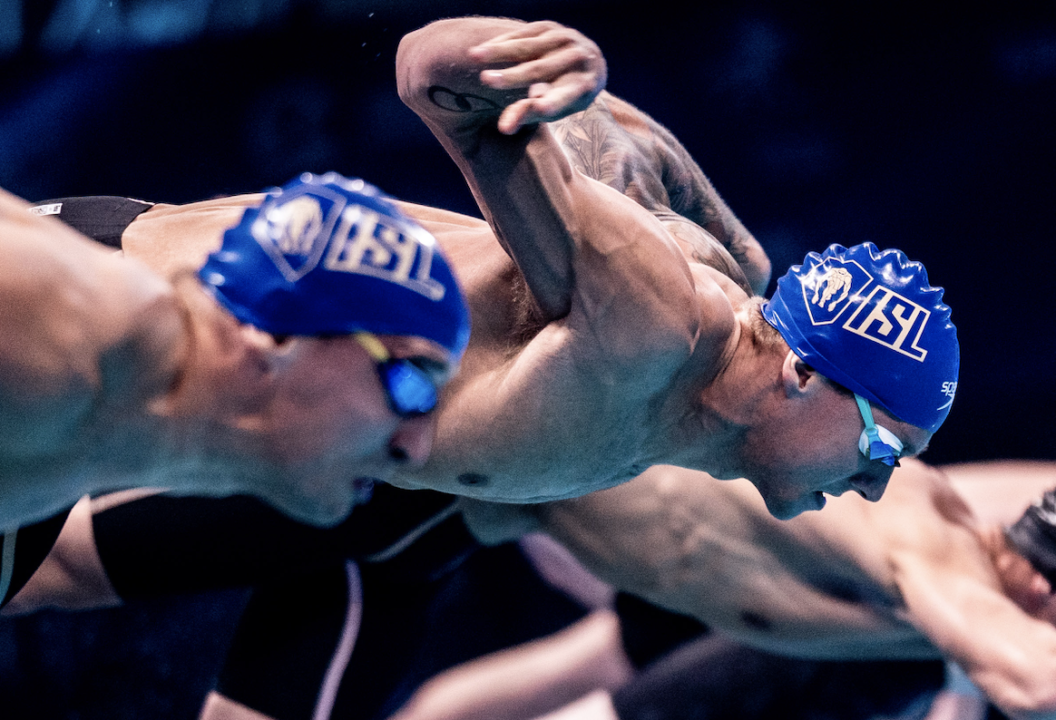 In his fourth swim of the session, Caeleb Dressel put up an impressive 45.01 leg for the Condors as they topped the LA Current in the 4x100 mixed free relay. Current photo via Mine Kasapoglu

After the Cali women and LA men swept the relays on day one of their semi-final match, it was the Condors who proved to be the superior team in the mixed 4×100 free on day two, posting the top time of the season in 3:14.96. That overtakes the 3:15.17 done by the London Roar in the other semi.

Highlighting the entire match was Cali’s Caeleb Dressel, who put things into an extra gear on day two by setting a new world record in the 100 IM, notching a pair of American Records in the 100 free and 50 fly, and then closed things out with a blistering 45.01 split on this relay. That was the fastest in the field here by well over a second, and gave the Condors a sizeable buffer over LA that they wouldn’t relinquish the rest of the way.

Let’s take a closer look into all of the splits on the relay below:

It was all Maxime Rooney on the lead-off leg, as the LA Current swimmer broke 46 seconds for the first time from a flat-start in 45.86. Rooney had gone a best of 46.26 on day one leading off the men’s free relay, and was also 46.41 earlier in the session individually.

This was Dressel’s fourth swim in just over an hour, but he pulled through in a big way for the Condors with a 45.01 split. That marks his second-fastest ever, trailing only his 44.91 from day one. His individual American Record from earlier was set in 45.20.

That swim gave Cali a lead of six-tenths over LA at the halfway mark, as Tom Shields did everything expected of him for the Current in 46.20. Shields ripped a 46.05 in the men’s event on day one.

Apostolos Christou popped a nice 46.59 for LA ‘B’ squad, half a second under what he went on day one.

The Cali and LA women ultimately balanced each other out, with the Condor duo of Olivia Smoliga and Erika Brown out-splitting the Current’s Andi Murez and Abbey Weitzeil by a combined .07.

That man is a machine. Amazing endurance, recovery and raw power.