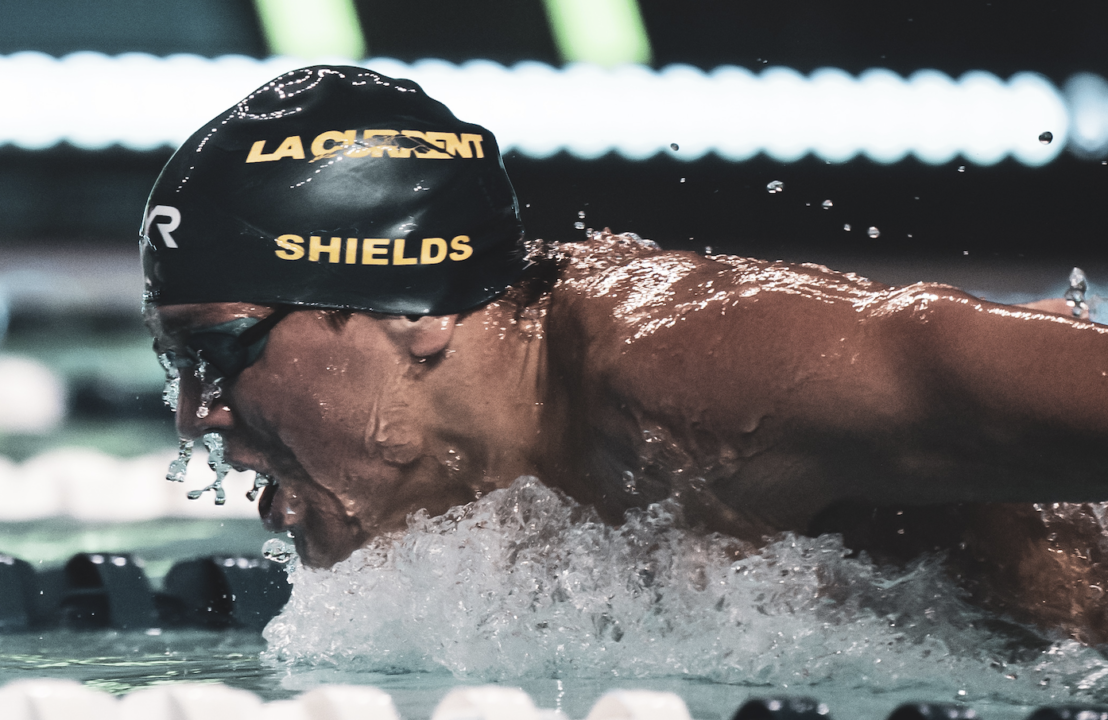 Tom Shields' 48.14 100 butterfly split on LA Current's medley relay is #2 all-time, trailing only his 48.07 effort at the 2015 Duel in the Pool. Current photo via Mike Lewis/Ola Vista Photography

The Cali women and LA men went two-for-two in relays on the opening day of the second ISL semi-final, with the two clubs sitting a comfortable 1-2 in the standings as they look poised to return to the championship final.

While there were notable splits abound on the relays, the two most eye-popping swims came in the men’s events. In the medley, Tom Shields produced one of the fastest fly legs in history in 48.14, while in the free relay, Caeleb Dressel joined an elite club with a sub-45 anchor split.

Olivia Smoliga had made her way under 52 seconds for the first time in Match 10 (51.95), and further improved her personal best leading off in 51.89 here to give Cali the early lead over Anastasia Gorbenko and the LA Current. Gorbenko was just over two-tenths off her best in 52.58.

The top split in the field went to LA’s Andi Murez, who anchored the Current home in 51.63 to make it a real close race. She ultimately ran out of room, finishing two-tenths behind Cali at the wall, but made up an impressive half-second on Natalie Hinds (52.12).

Erika Brown and Abbey Weitzeil put up identical 51.97s swimming the second leg — Brown has been sub-52 now in three straight matches, while Weitzeil was off of what she would produce later anchoring the medley (51.22).

Toronto was in no-man’s land in third, with Michelle Coleman putting up their fastest leg in 52.36.

After the Condor women beat LA by two-tenths in the women’s free relay, the Current men returned the favor by edging the Cali men by the exact same margin.

Tom Shields (46.05) and Kristian Gkolomeev (45.76) had a pair of crucial legs for the Current, as they handed Dylan Carter a two-second buffer on Caeleb Dressel for the anchor leg.

Carter would need all of that margin, as Dressel ate up 1.80 seconds on him over four lengths to split 44.91, the fifth-fastest split in history according to USA Swimming’s database. The quickest-ever is a 44.67 from Cesar Cielo in 2014, while the individual world record was set in 2008 by Amaury Leveaux in 44.94.

Justin Ress also threw down a 45.86 split for Cali, but Marcin Cieslak‘s 47.47 dug them too big a hole for Dressel to climb out of.

The Titans had all four men in the 46s to take third, including a standout 46.02 from Blake Pieroni.

While it was well off her best split, Lilly King was still the fastest woman on breaststroke, turning in a 1:04.26 to give Cali a further seven-tenths on LA, who had Gorbenko go 1:04.88.

Louise Hansson was the only flyer sub-56 for Toronto, while both Kelsi Dahlia and Beryl Gastaldello were well off their times from the individual event for Cali and LA.

Weitzeil had the top anchor split for LA in 51.22, while Erika Brown notched her second 51-second free leg of the day to give Cali the easy win in 3:48.09. Weitzeil set the American Record individually less than a week ago in 51.26.

The men’s event was a much tighter affair, with LA, Cali and Iron all right in the thick of it through the final exchange.

After Ryan Murphy, Coleman Stewart and Robert Glinta all put up 49.9s on backstroke, the club’s three breaststrokers were tightly bunched in their splits as well, with the Current’s Felipe Silva leading the pack in 56.51.

The butterfly leg, however, was the game-changer.

Going head-to-head with Dressel, who was clearly on good form, Tom Shields dropped the second-fastest butterfly leg in history in 48.14, handing Maxime Rooney over a second advantage heading into the freestyle.

While it was his fastest of 2020 by half-a-second, Dressel still lost almost eight-tenths of ground with his split of 48.92.

Justin Ress did everything he could on the anchor, producing his fastest leg ever in 45.36 to pull Cali within .35 of LA at the finish.

Rooney managed to close things out in 46.06, while Yuri Kisil had another fast relay swim for Toronto in 46.03.

Tom Shields is absolutely killing it and I’m so for it.

Chasing down locthe on the medley relay

Had to look up the WR for 100 fly (knew it was le Clos) bc don’t have much of a reference when it comes to SCM times. Found it interesting that of the 18 WR’s there are 17 different swimmers on the list.