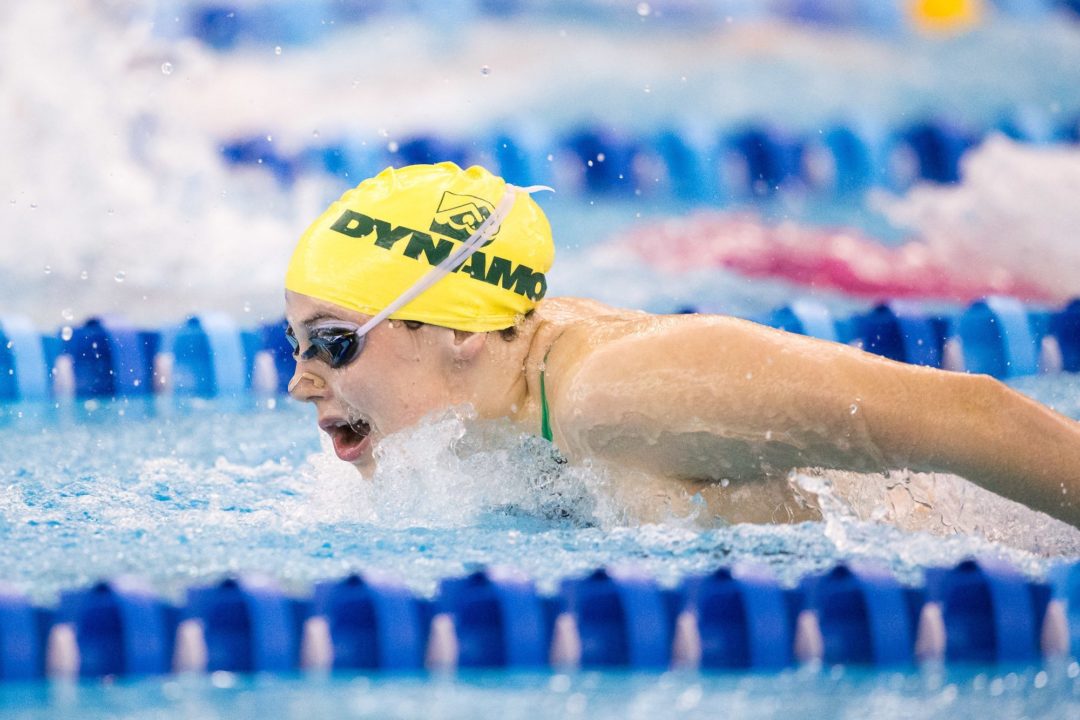 Kylie Stewart is the top seed in 3 of the 5 women's individual events: the 400 IM, the 200 free and the 100 back. Current photo via Tim Binning/TheSwimPictures.com

We’ll be updating the races as they happen right here.

In between those two relays was PASA’s A-relay that includes Stanford commit Ally Howe, who was a 24.66 on the leadoff leg – easily the fastest leadoff of the field.

Other noteworthy splits include a 23.4 from the Academy Bullets’ Mimi Schneider on the fly leg, and a 21.93 freestyle anchor from Canyons Aquatic Club’s Abbey Weitzeil; they swam on the 4th-and-5th-seeded relays, respectively.

Within that race, though, is the fight between the butterfliers. The Stanford-bound Liang from PASA split a 20.94 on the fly leg of his relay, and the Florida-bound Dressel from Bolles split a 20.70 on his relay.

Both teams will look for a push going into that leg. Bolles, leading off with Josh Booth, should have an edge on the backstroke leg, but Stanford will get that advantage right back on the breaststroke leg, where they have Curtis Ogren, who was a 24.81 in prelims.

Other notable splits include a 19.96 anchor from 15-year old Thomas Anderson on KING’s 8th-place relay, and a 19.8 from Nick Magana on Scottsdale’s relay.

Ella Eastin is in the hunt for an IM sweep in Greensboro. She’s already got the 200 out of the way, and after coming into the 400 IM as the top seed, she comes out of prelims in the same position with a 4:13.48.

She has a big advantage over her stiffest competition, Megan Kingsley from the Mount Pleasant Swim Club, on the breaststroke leg, but will have to maintain contact in the first 200 yards where Kingsley (4:15.09) is so good. If Eastin can be within three seconds of Kingsley at the halfway turn, she should be confident about her chances to win.

Also in the mix will be Hannah Moore, the 3rd seed in prelims with a 4:15.55, and 15-year old Y Spartaquatics swimmer Savanna Faulconer, who was a 4:15.86 in prelims. That’s her lifetime best by almost four seconds, which is a tall order to repeat in finals.

Also of note, Dynamo’s Kylie Stewart, the only swimmer seeded faster than Eastin coming in, scratched out of prelims: likely a wise decision, as she was entered in three individual events and at least one (but more likely two) relays.

A bit of a break in the action, it seemed as though a lot of top swimmers were biding their energy in prelims of this boys’ 400 IM. Sam McHugh from the Baylor Swim Club took the top seed in 3:49.83, followed by future Stanford teammates Brock Turner (3:50.74) and Curtis Ogren (3:51.90).

Ogren is a real danger in finals; we saw him ‘play the game’ of multiple swims very well on Thursday, and he’s been 3:44.

The preliminary rounds of the girls’ 100 yard fly set up a very competitive final, which this event always seems to bring. The top 5 finishers from the morning heat are separated by just .22 seconds. That’s a tighter spread than we’ve seen in any race so far in Greensboro, and probably tighter than we will see, and with the always-temperamental butterfly finish, anything could happen.

Minnesota-bound Danielle Nack of the Mantas Swim Club took the top seed in 53.47; she used a big first 50 to earn that honor (she was 24.4 – nobody else was under 25), and so will have to play chicken again in finals.

SwimAtlanta’s Kaitlin Grover, headed to UCLA, is the 2nd seed in 53.49, and SwimMAC Carolina’s Elsa Welshofer is 3rd in 53.55

Lindsey Engel is the 4th seed in 53.65, and is followed by another SwimMAC representative, Caitlin Casazza in 53.66.

Mount Pleasant Swim Club’s Megan Kingsley, who is heading to Georgia next fall, rounds out that tight grouping at the front of the pack with her 53.69.

A little ways back, but even then not too far, is Miranda Tucker from Livonia, Michigan and Madison Wright from Kingfish Aquatics in 53.9’s.

The B-Final has the same tight grouping (there’s less than a second spread among the top 18), but keep an eye on Jessica Snover of Y-Spartaquatics. At 14, she is the 10th seed out of prelims in 54.23, and isn’t too far from her best time.

The same battle we set up earlier is back-in-play in the individual 100 fly, though this time there will be some party-crashers. Caeleb Dressel took the top seed in the 100 yard fly in 47.51 after running away with his heat (on a cruise-of-a-finish), and Andrew Liang sits 2nd in 48.21.

Both swimmers will likely be faster in finals, but Dressel’s splits are really intimidating. He was out in 21.44 before shutting down to 47.51. He didn’t need to expend much to get safely into this final, so expect maybe a 45, if not faster, on Friday night.

Not far behind them, though, is Kyle Gornay of the Redlands Swim Team in a 48.33; he should be under 47, at least, in finals. The 4th seed goes to one of the youngest entries in the field, Michael Andrew, in 48.40. That broke his own National Age Group Record by about three tenths (read more about that record here).

Paige Madden is the top seed in the 200 free by just .03 after going 1:46.59 – that’s almost a two second drop from her seed time, and she moved up from 27th to take the pole position for tonight’s final. Just behind her is Claire Adams of Carmel Swim Club in 1:46.62, and just one tenth back from that sits Ozaukee Aquatics’ Katherine Drabot. The field looks like it’s going to be very tight for tonight’s final, with three more girls sneaking under 1:47 – Erin Falconer, Eryn Eddy and Nora McCullagh. That means the top 6 are all separated by just four tenths of a second.

Cecilia Williams and Megan Raab round out the top 8. Top seed Kylie Stewart suprisingly missed the A final, tying for 9th place with Jordan Stout. Stewart scratched her first race, presumably to stay fresher for her other two events, but after gaining over two seconds in this 200 free, there might be more to that story.

In addition, the top 5 swimmers in the B final will come in with sub-1:39 times, showing off the crazy depth of this event.

Lindsey Horejsi out of Atlantis Swimming of Minnesota went 59.75 to break Megan Quann’s NAG record at the 15-16 age class. That’s a big-time breakout swim for a girl who seems to have been putting up breakout swims all over the place the past two years. She’s the top seed for tonight, followed by fellow 16-year-old Lillia King in 1:00.27. Kennedy Lohman, a 15-year-old from Lakeside is third and Heidi Poppe is the fourth seed in 1:00.88.

Austin Temple from Virginia Tide took over the top spot from number-one seed Curtis Ogren. Temple went 54.81 and Ogren 54.96, but watch out for Ogren at finals – he had some major drops from morning to evening yesterday. That sets up a showdown between Temple, who has committed to Texas, and Ogren, a future Stanford swimmer, in the A final.

The rest of the A final will include Ian Finnerty, Alexander Morgan, Christian Lorenz and Joseph Kmak, all of whom were 55s at prelims.

Michigan-bound Clara Smiddy is the top seed after prelims – she went 52.60 to easily lead the field. Ally Howe out of PASA sits second, a half-second back in 53.18, and Taylor Garcia is third in 53.21.

Worth keeping an eye on: Kylie Stewart did make the final in this race after scratching the 400 IM and missing the final of the 200 free. She’s got a busy schedule for the day and has had an up-and-down morning. Stewart was about a second off her seed in prelims (53.38), but she’s got the speed to give this field a run at finals, so keep an eye on lane 6 tonight.

Claire Adams is the 5-seed, with a prelims time of 53.43. Last night’s 200 IM champ Emily Eastin is in the A field, and Hannah Leach and Emma Schanz will join her there tonight. All of the top 9 swimmers got under 54 seconds this morning.

I love the college format!! What a great intro for these kids. Good luck today!!

I sort of wish that they used the DII format as to include the 1000.

I would assume that kylie Stewart, Gunnar bentz and perhaps Ella Eastins tapers were all slightly off put by the World Cup series- where they were expected to have some rest. If anything I bet kylie and gunnar are back in training mode and arent a whole lot focused on this meet. But that is just my spectulation.

You’re right. Bentz and Stewart are slow this week.
Eastin looks much better.

It appears there was no taper for any of the Dynamo swimmers, and combine that with perhaps the poorest air quality ever. Fans are coughing and have red eyes in the stands, and since chloramines stay low, it’s no wonder we are watching kids gasp, cough and choke after finishing! Caeleb Dressel about coughed up a lung after closing out a relay last night, but even swimmers in early prelim heats are having real issues with the air. Too bad GAC spent all the money, with one very large oversight!

The young Thomas Anderson is impressive so far.
I want to watch him in the 100 back final.
He has destroyed his PB yesterday in 47.81 in the medley relay.
Remember he’s the 13/14 NAG record holder in 48.73.

Race of the night is in my opinion the girls’ 100 breast.
4 girls can swim under the minute.
Lindsey Horejsi has already done it in the… Read more »

Heidi Poppe was 59.4 in her relay split last night, this race could be epic!!