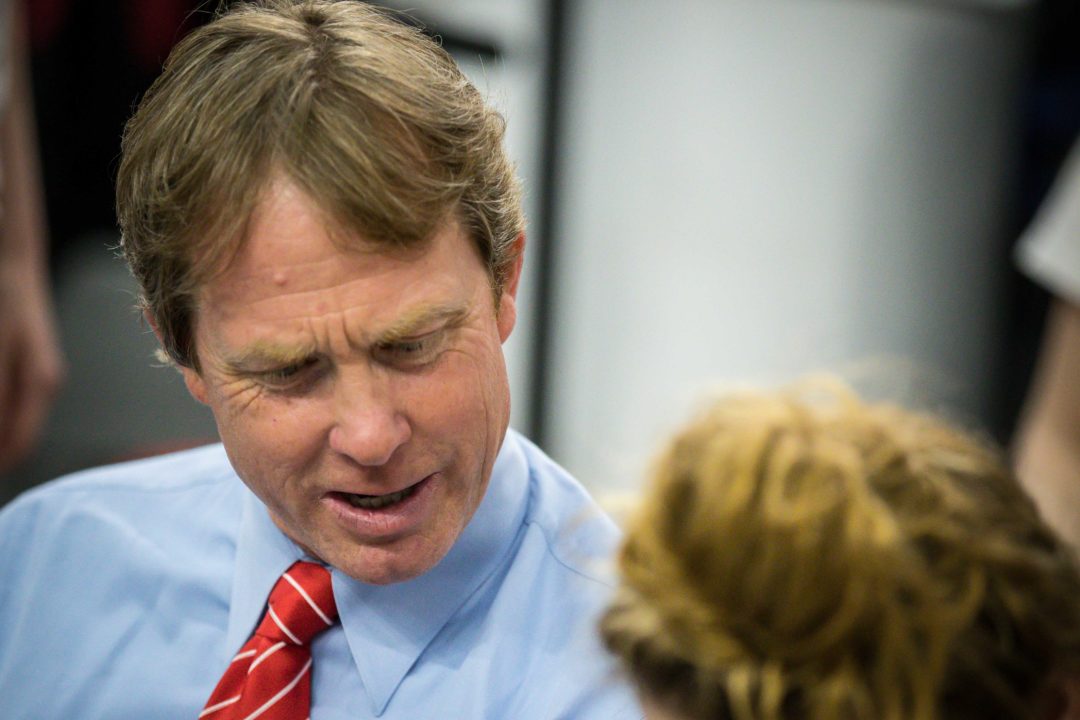 While in Bloomington, SwimSwam sat down with IU head coach Ray Looze to ask about how IU would integrate their new coaches into the already successful culture. Current photo via Jack Spitser/Spitser Photography

While in Bloomington, SwimSwam sat down with IU head coach Ray Looze to ask about how IU will integrate their new coaches into the already successful culture. Ray explained that with assistant Cory Chitwood, they will be using him in a myriad of areas around the pool deck, not just as a distance coach. Distance training is what Chitwood’s been known for, most notably as Olympic medalist Leah Smith’s primary coach.

“There are a number ways Cory can integrate into our programme. We have a several female staff, any of whom he could integrate with.

Alternatively, he could just do what everyone else is and move to Alabama”.

Ray Looze continues to be one of the top coaches in the country and the fact that his staff is being hired away from him is an indication of success. People continue to make comments like this about IU, but the reality is we are fortunate to have a coach like Ray Looze in college swimming. He continues to be one of the best coaches in the country at developing talent in the pool as well as on his coaching staff.

Rowdy Gaines recently tweeted about the commenters on SwimSwam being people who live in their parents basement pandering to the lowest common denominator. Let’s try to prove him wrong by not making comments like this one.

Are you okay with chitwood’s behavior? Would you want him to be a roll model for your swimmer? I think it is fair to question Ray’s integrity based off a hire who clearly has none.

I don’t know anything about Chitwood other than what I have read on the comments section of SwimSwam. Do you know him? I’m sure that Ray has done his homework on this hire and feels that this person deserves a second chance. I do know Ray is a man of integrity and would love for him to be a mentor to my own children. I’m glad he has decided to take a broken person under his wing and help. I could name tons of coaches and athletes who have made this mistake in the personal life, they don’t all deserve to be run out of the sport. Chitwood lost his job at his alma mater due to this situation, now… Read more »

Quote from another D1 head coach “Looze would sell the gold out of his grandmother’s teeth to win”. You decide if that’s good or bad, or if you want that attitude coaching your children, excuse me, coaching young impressionable adults.

Please source this and put your name on the byline.

Rowdy’s just mad that we all talk trash about his commentating. Hate to say it but I know a lot of non swimswam commenters that also can’t stand Rowdy.

It was a joke about college swimming, this seems the obvious place for it. As a swim fans, we should be able to joke about the sport.

It’s going round in a circle in water as fast as possible, if’s not actually that important.

If Rowdy wants to think that about me, good luck to him.

What’s wrong with living in your parents’ basement?

The good thing is my parents only breathe to their right, so they haven’t noticed I’ve been living in their basement.

Chitwood is a talented coach, whose personal life is none of our business. All the best to him at IU.

Guess it’s ok if integrity is not important to you and you’re ok with your child being around such a person. You obviously have no idea what a distraction the situation in Tucson caused. That’s only on the swimming side. Then you consider what his wife is STILL going through as he happily bolts to IU. There are plenty of great coaches around with much more integrity than Corey. I don’t care how “successful” he has been. He made a bad choice that no one forced him to make and let it go on for a long time. I’d much rather have my child spend four years around someone who models integrity and maturity. Kids are still very impressionable at… Read more »

Now do Augie Busch. Or just cut & paste any of the UVa alum rants about Augie. Same story, different town.

Well just because he cheated he’s done?? Maybe he can help IU cheat!

Personal life is a reflection of who your kid will be learning and growing from in a very important time of their life. 99% of swimmers will not be making a career off their talent, I would want someone who can be a roll model for every aspect of life outside the water.

I guess my question would be is the reported behavior at Az a pattern of behavior or an aberration. Sometimes life happens, we make wrong decisions that snowball and hurt others as well as ourselves. Is a role model only someone that always made the right decisions and can say hey do it this way it worked for me or is there value in observable second chances and redemption?

Uh, Phelps had DUIs (including a felony DUI arrest), and he got to carry the flag at the opening ceremonies at Rio. So there’s that.

There is something to be said for paying for your mistakes though. And it seems like the only one hurt in this is his ex wife.

I took 3 showers after watching this video. Gross!