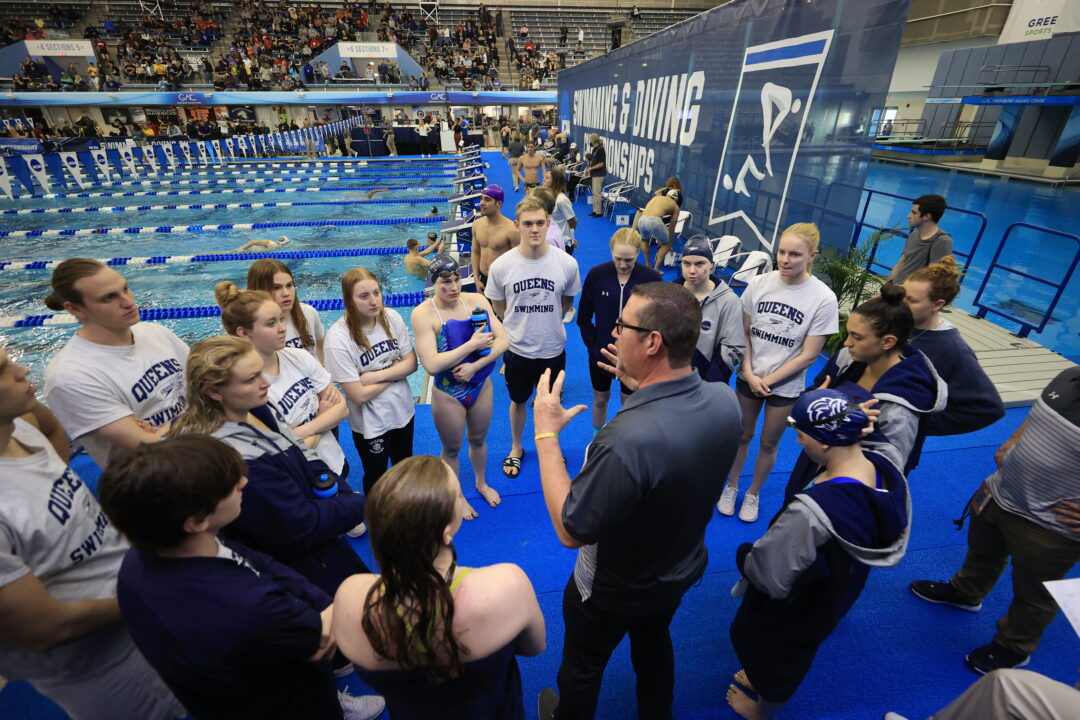 On Friday, the school reported that the Queens Board of Trustees unanimously voted to accept an invitation to join the ASUN Conference. Archive photo via Queens Athletics

Braden Keith contributed to this report.

Queens University in Charlotte, North Carolina will begin a four-year transitional period into NCAA Division I athletics on July 1, 2022.

On Friday, the school reported that the Queens Board of Trustees unanimously voted to accept an invitation to join the ASUN Conference.

Queens Board of Trustees has voted unanimously to accept an invitation from @ASUNSports. Queens will begin its four-year transitional period into @NCAA Division I on July 1, 2022. More details to come on Tuesday, May 10. #GoRoyals | #ASUNBuilt pic.twitter.com/qujOjnj23P

This move is a significant one in the world of collegiate swimming, as Queens has been a dominant force of late in the Division II ranks.

The Royals have won the last seven consecutive men’s and women’s NCAA Division II championships in swimming and diving.

The program was launched for the 2010-2011 season and benefitted from an early association with David Marsh, who was the architect of the Auburn swimming dynasty of the 2000s. Marsh was training his pro team, Team Elite, out of the Queens pool, and sparked success for the team when he funneled one of his best SwimMAC high school prospects, Matthew Josa, to the program.

The program has had only one official head coach in its history: Jeff Dugdale, who swam under Marsh at Auburn.

The ASUN Conference, formerly the Atlantic Sun Conference, currently does not sponsor either a men’s or women’s swimming and diving programs.

The schools in the ASUN Conference that compete in swimming & diving (Bellarmine men and women, FGCU women, Liberty women and North Florida women) all compete in the Coastal Collegiate Sports Association (CCSA).

NCAA policies on changing divisions prevent teams from competing at NCAA Championships, though they are still eligible to vie for conference titles. Not racing at NCAAs would halt some of the swim team’s momentum, but they will be able to expand from 8.1 men’s scholarships to 9.9 per season, and women’s scholarships from 8.1 to 14 per season.

Last season, the swim team raced head-to-head against numerous Division I schools, including earning wins over the men’s teams at Duke and Davidson.

Queens University had an undergraduate enrollment of 1,670 for fall of 2020 – the last semester unimpacted by the COVID-19 pandemic. While the move to Division I is likely part of plans to grow, current enrollment would make the school likely the second smallest Division I school behind only Presbyterian College in South Carolina.

Queens is a Presbyterian-affiliated private university that was founded in 1857. The school changed its name from Queens College to Queens University in Charlotte in 2002, part of a large-scale expansion of educational offerings over a decade.

The school has currently 18 varsity programs and no football team. The Levine Aquatic Center on-campus has an 8-lane, 33-meter stretch pool.

Queens says additional details on the move will be released on Tuesday, May 10.

Queens joins Lindenwood University, the University of Southern Indiana, Stonehill College and Texas A&M University–Commerce in beginning a transition from NCAA Division II to Division I in 2022-23, with the end date coming in 2026-27.

Bellarmine University and Dixie State University both began transitioning from NCAA Division II in 2020-21 (with the period ending in 2024-25). Other schools currently in the midst of changing from D2 to D1 are California Baptist University, Merrimack College, and the University of North Alabama.

Could some explain to me what conference meet the Liberty men compete at if they don’t compete at the CCSA championship?

I don’t get it. Why can’t they compete at NCAAs right off? Why penalize them with a waiting period?

Difference in rules between the divisions. The NCAA doesn’t want D2 schools with looser recruiting rules to stock up and then transition to D1 just to immediately win a championship (and then maybe drop back down)

This is program suicide. Being the big fish in the small pond is attractive for recruits. Can’t forget about the D2 trademark of recruiting freshman in their mid 20s that will no longer be able to take place. That will be a huge detriment to the success of their program.

How do we think this will affect recruiting? Not being able to swim at a national meet for 4 seasons seems like it could deter many of the impact swimmers they usually pull in

The CCSA on the men’s side included gardner Webb, incarnate word, FAU, and old dominion

CCSA (as of right now, likely going to change further) has Gardner-Webb, ODU, FAU, and Bellarmine on the men’s side. Lindenwood wants to join with their men and women also, at least that’s the word.

So it could end up as:
Men’s programs:
ODU
GWU
FAU
Bellarmine
Queens
Lindenwood

That’s a pretty crowded conference. So it likely wouldn’t happen that way. But the bottom line is, NONE of this conference reshuffling has anything at all to do with swimming lol, and everything to do with football. So who knows?! Only time will tell.

Interested to see how this affects their program and funding, have there been any other notable Division moves?

UCSD did it recently from DII to DI, no clue how it’s affected them though.

I remember about 5-6 years ago, Grand Canyon had a bunch of guys at NCAAs, but they couldn’t compete at their conference meet because they had just moved up

1
0
Reply
Coach A
Reply to  thezwimmer

GCU swam in the conference meet. just couldn’t swim at NCAA’s if they qualified. Hence the creation of the CSCAA’s National invitational Championship (NIC) meet