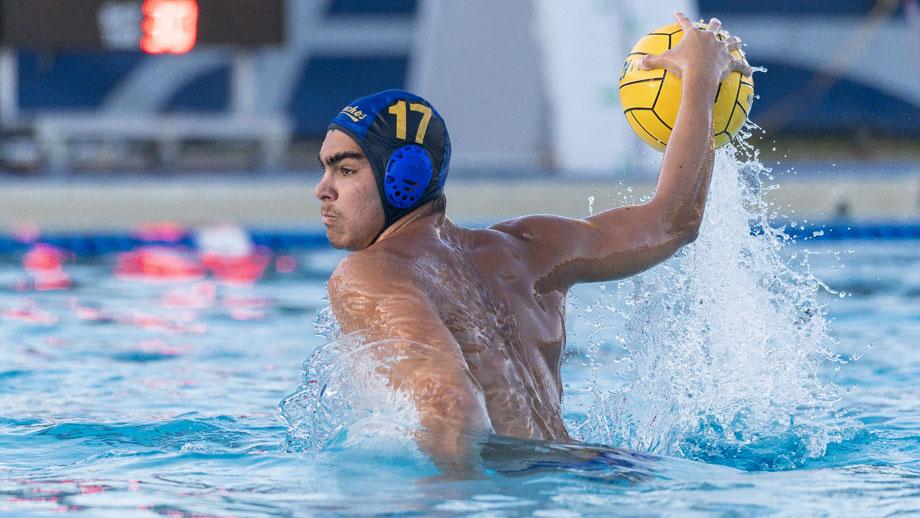 With seven upsets and six overtime contests and 171 scoring efforts of three goals or more, the choices for conference players of the week were plentiful. Current photo via UC Santa Barbara Athletics

With seven upsets and six overtime contests and 171 scoring efforts of three goals or more, the choices for conference players of the week were plentiful on Week 8 of the collegiate men’s water polo season.

Here’s a look at the selections for each league.

Player of the Week: Nathan Puentes, UC Santa Barbara – Recorded nine goals, an assist and a steal in wins over #7 Long Beach State and #8 Cal; tallied a season-best six goals against the Bears.

Defensive Player of the Week: Max Sandberg, Navy – Recorded a career-high 12 saves, while surrendering just five goals in 26 minutes between the pipes in the Midshipmen’s 14-8 upset win over #17 George Washington.

Rookie of the Week: Chris Freese, Johns Hopkins – Chipped in three goals, four assists and two blocks at the CWPA Division III Eastern Championships; dished out two assists and added a steal and a block in a 23-11 win over Austin College; put in two goals and assists in a 20-14 win over Connecticut College; notched one goal and one block in a 16-12 championship match win over MIT (16-12).

Player of the Week: Andrew Chun, Stanford – Recorded a career-high 18 saves (.621 save percentage) and three steals in a 12-11 win over #5 Pepperdine

Newcomer of the Week: Max Wade, Austin College – Was named Rookie of the Tournament at the Division III Eastern Championships; notched 18 goals over four games at the tournament

Offensive Player of the Week: Ethan Lewis, Claremont-Mudd-Scripps – Reached the 100 goal milestone for his career; scored once in a 10-8 win over Cal Lutheran; put in five goals in an 11-10 win at Redlands

Defensive Player of the Week: Dylan Woodhouse, Whittier – Notched 20 saves and three steals in two 32 minute efforts in the cage; made 11 stops and posted a steal in an 18-8 win over La Verne; grabbed nine saves and two steals in an 11-8 win over Cal Lutheran.