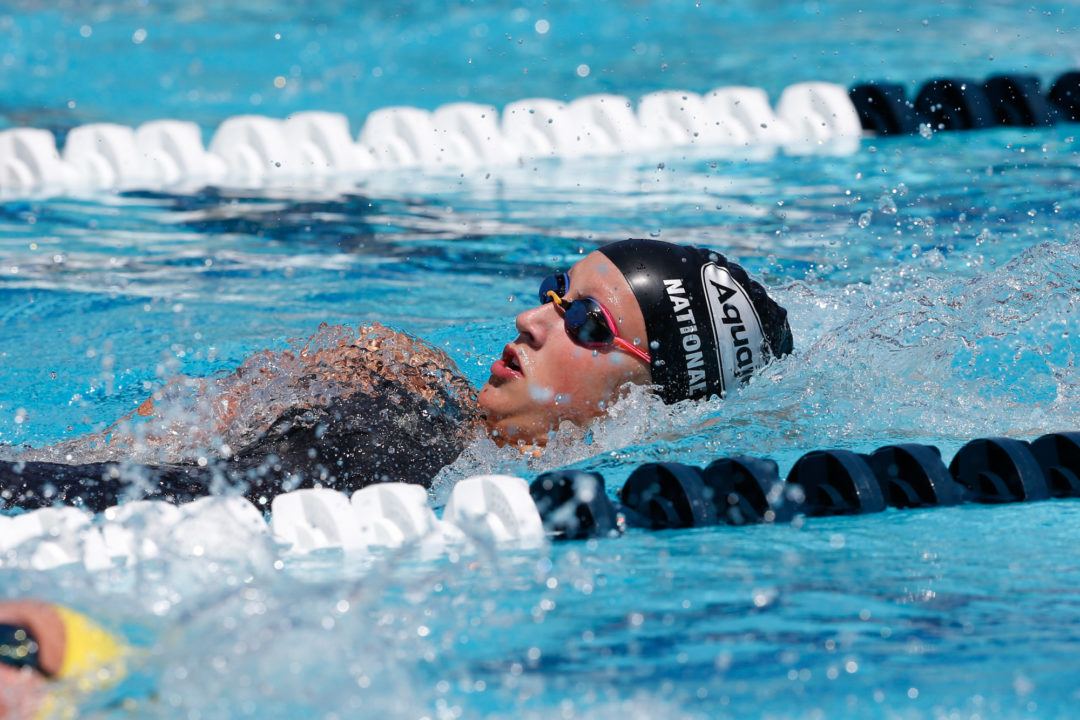 The 2019 NCSA Spring Junior National Championships shapes up to be another huge meet. The event, even without a long course finals session for swimmers to chase Olympic Trials cuts, has still drawn a massive number of swimmers from across the country (peaking with 364 entries in the girls’ 50 fly).

At a meet this deep, nearly every race has a star or a future superstar at the top of the seeds. Below, we’ve pegged out a few of the highlights of the meet worth following.

1. Anthony Grimm in the 100 back – High school sophomore Anthony Grimm swam a 20.87 in the 50 backstroke on a relay leadoff split at the Virginia Class 6 State Championship meet in February. While that 20.87 was one of the great all-time high school swims by a sophomore, what we didn’t see at that meet was a 100 backstroke, as Grimm wound up scratching out of that final with a health issue. That sets up a ton of anticipation for his 100 back at NCSAs, where he’s the top seed in 46.63: a time swum at a high school regional championship. Hig biggest push in that race should come from Arizona State commit Jack Dolan, who is seeded 2nd in 47.28. Grimm is seeded 1st in 5 of the 9 events in which he’s entered: the 50 back, 100 back, 50 fly, 100 fly, and 50 free. He’s also scheduled to swim the 50 breast, 100 IM, and 200 IM.

3. Battle in the Girls’ Backstroke Races – There is a group of 16-year old girls at this meet who will emerge as a through-running storyline, but the best battle should be in the backstroke races. There, US National Teamer Isabelle Stadden and US National Teamer Phoebe Bacon will battle thrice for the NCSA titles. There will be other names involved – including 16-year old Kaylyn Schoof and 16-year old Ellie Waldrep (in the 50), making these among the deepest finals in the meet. Last season, Bacon won the 50 back, Stadden won the 100 back, and Caitlin Brooks (not swimming at this year’s meet) took the 200.

4. Torri Huske Chasing Records – Huske will be the top seed in the 50 free, 50 fly, 100 free, and 100 fly next week in Orlando, but the biggest focus will be on that 100 fly. She’s the new National High School Record holder in that event, and is just .21 seconds short of Beata Nelson’s 15-16 National Age Group Record in that event. With 14-year old Claire Curzan, who’s already been under the 15-16 record, aging up soon, this could be Huske’s best chance at taking out the record before Curzan beats her to it (even though Huske doesn’t age up until next short course season).

6. Breaststroke Breakouts – 18-year old Hannah Bach, an Ohio State commit, is a name you might not be familiar with, but she’s one you’re going to hear a lot next week. At February’s Ohio High School State Championship meet, lost among the National Records and huge swims by the Foster brothers, Bach had a big breakthrough meet. She improved her lifetime best in the 100 breaststroke by a second-and-a-half and is now the top seed at NCSAs in 59.29. That race carries a ton of excitement, including a couple of swimmers chasing National Age Group Records: 16-year old Anna Keating (best of 59.65, record of 58.19) and 14-year old Zoe Skirboll (best of 1:00.96, record of 1:00.02) each rank in the top 8 of all-time in their  respective age groups.

It is going to be such a lonnnng meet, let’s hope the pool air is good!

Love that almost every storyline has a DMV swimmer included.

Yes the new era of DMV stars is here. Can it be as good as the previous era of Hu, Ledecky, Conger, Seliskar, Shebat, Vissering, and others?

At B1G champs, it was difficult to identify a team without a former DMV kid.

DMV? Google was no help.

What does ncsa mean