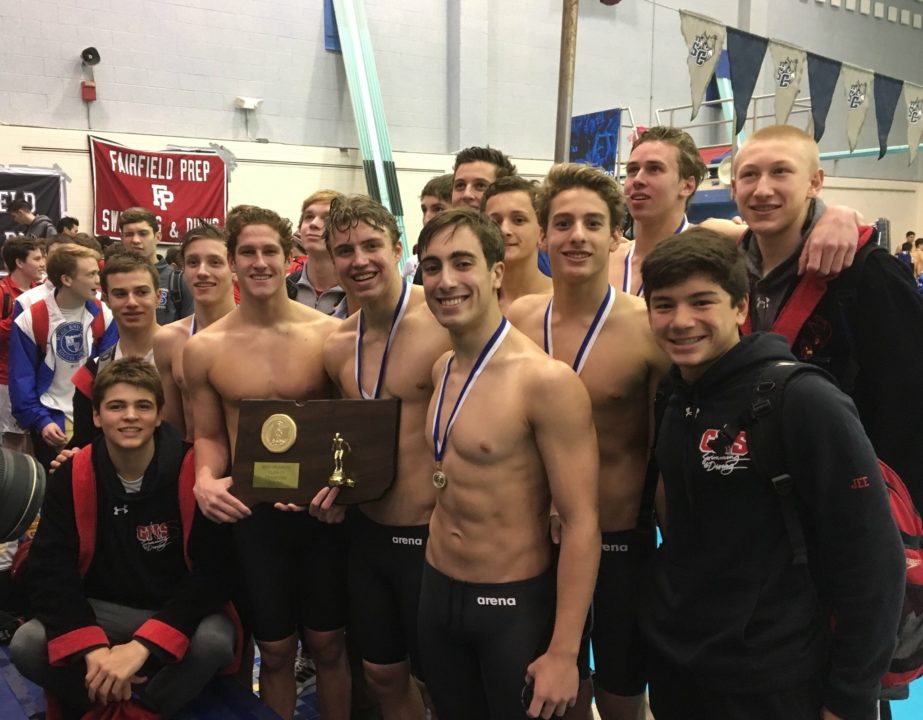 Greenwich has been the predominant boys team throughout recent history, winning the past six CIAC Open State team titles. This year proved no different, as the Cardinals extended their state win streak to seven consecutive years. They tallied a total of of 600 points, well ahead of New Canaan’s 480.5 for second.

Ridgefield sophomore Connor Hunt claimed the first individual event win, taking the 200 free in a time of 1:41.40 to out-touch senior McAllistar Milne of Glastonbury, who touched at 1:41.55.

Hunt’s teammate Will Bryant ended his senior year as a state champion in the 50 free. He recorded a final time of 21.25, which was only less than a tenth of a second ahead of runner-up John Marcolina out of Fitch Coop – the fellow senior touched the wall at 21.34.

Ben Feldman, a junior from Westhill/Stamford, was the only other two-time event winner at the meet. He first won the 100 fly as the only competitor under 50, stopping the clock at 49.72. In an interesting double, Feldman later emerged victorious in the 100 breast in a time of 57.26.

Greenwich took their first relay win in the 200 free relay behind legs from Lewis, Nicholas Malchow, de la Sierra and Charles Clark. They put up a final time of 1:24.98 ahead of New Canaan’s Patrick Colwell, Brian Harrell, Michael Kotlyar and Jake Ritz’s combined time of 1:25.69 for second.

Senior Colin MacKellar, who lead off Pomperaug’s winning 200 medley relay, also got to cap off his senior year with a state title. He secured the victory in the 100 back in a time of 51.10.

To put the final nail in the coffin, the Cardinal’s relay squad consisting of Malchow, Mark Merson, Todorovic and Clark clinched the win in the 400 free relay, clocking a 3:08.05. Pomperaug’s team of Moran, Quesenberry, Regan and MacKellar took second with a final time of 3:09.14.