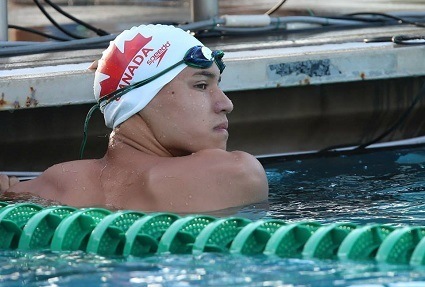 Thormeyer will be swimming for Canada this summer at the Olympics and spoke about what it was like to have Olympic Trials re-scheduled 3 times. Archive photo via Markus Thormeyer

The Canadian Olympic Trials will take place this week in Toronto, Canada, and will be the last chance for swimmers to qualify for the Tokyo Games.

One of the 6 swimmers who have been pre-selected for the team, Markus Thormeyer, spoke with the media in a pre-Trials press conference to discuss how he has maintained his focus over the past year. Canadian Olympic Trials was originally scheduled to take place from March 30 to April 5, 2020, and on March 13th, 2020 it was announced that the meet would either be postponed or canceled to an unspecified date later in the year. Weeks later Canada announced that it would not be attending an Olympic Games in 2020.

Thormeyer was asked if it was frustrating to deal with the continued scheduling and re-scheduling of the meet.

“Now that Trials is finally happening it’s really exciting right now. Obviously, it’s a little frustrating when you are training towards something and the plan changes but it’s not like that was unexpected. And then the Olympics were postponed so it was kind of just like roll with the punches, anything can happen, do your best to be ready on whatever day.”

“Luckily they were pushed back well enough in advance that we hadn’t actually started fully preparing so we kind of just continued to train. We just trained for a very long time.”

Training for such a long amount of time without competing internationally is very mentally tough, said Thormeyer. He explained that the prospect of racing at an Olympic Trials meet without racing at a long course meet in 15 months could potentially be very stressful for anyone.

He went on to say, however, that within those 15 months he managed to continue on with good training which allows him to head into Trials feeling good and ready to compete.

Training-wise he says that they were lucky to have not experienced any cases of COVID-19 cases within the High-Performance training group in Vancouver, British Columbia where he trains. That has allowed training to stay consistent while following COVID-19 protocols.

During the press conference, Thormeyer also discussed the impact of having a growing number of junior swimmers seeing improvements as Trials approaches.

“It’s pretty exciting to watch,” said the Olympic backstroker. “This is kind of what it was like for the senior swimmers when I was up-and-coming so it’s really exciting to see the next generation of swimmers break my age group records. Or just be faster than I was as a kid because then it’s like ‘oh I can’t wait to see what you do when you’re my age and stuff.

“It’s kind of inspiring and it pushes me” he continued. “I don’t want to be beaten by some younger swimmer. Also, it’s really exciting to watch them swim fast because I do want to see them swim fast because it’s just really good for the future of swimming in Canada and I really want to see Swimming Canada develop further and reinforce our state as a powerhouse in international swimming.”

Thormeyer is set to race 3 events this week in Toronto and is entered as the top seed and Canadian record holder in the 100 (53.35) and 200 (1:56.96) backstrokes. Thormeyer has already qualified to race the 200 backstroke in Tokyo and will be looking to add the 100 to his Olympic program. One of those younger swimmers he mentioned in the press conference is Cole Pratt who is entered right behind Thormeyer in both backstrokes with a 53.81 in the 100 and a 1:57.96 in the 200.

Thormeyer’s 3rd event in the 100 freestyle in which he holds the second seed with a 48.71 behind 2012 Olympic silver medalist Brent Hayden‘s 48.47. A few weeks ago Thormeyer, Hayden, Yuri Kisil, and Josh Liendo qualified for the men’s 100 freestyle relay for the 2021 Olympic Games so spots will be up for grabs in the event both individually and for the relay.

2016 Olympian and member of that qualifying relay Yuri Kisil shared some thoughts of the race saying at first that he wasn’t sure if they would be able to step up and earn that qualification. He explained, however, that once Brent Hayden opened it up with such speed, they were all fired up, ready to race, and able to throw down a time that surprised them all.

Kisil said that the swim was a definite confidence boost heading into the meet even though they will all still to pull off another quick swim individually in order to make the team.

Thormeyer was pre-selected in the 200m (from World Championship) but must still qualify in the 100m.