Phelps on Milak’s 200 Fly Record: ‘I Couldn’t Be Happier to See How He Did It’ 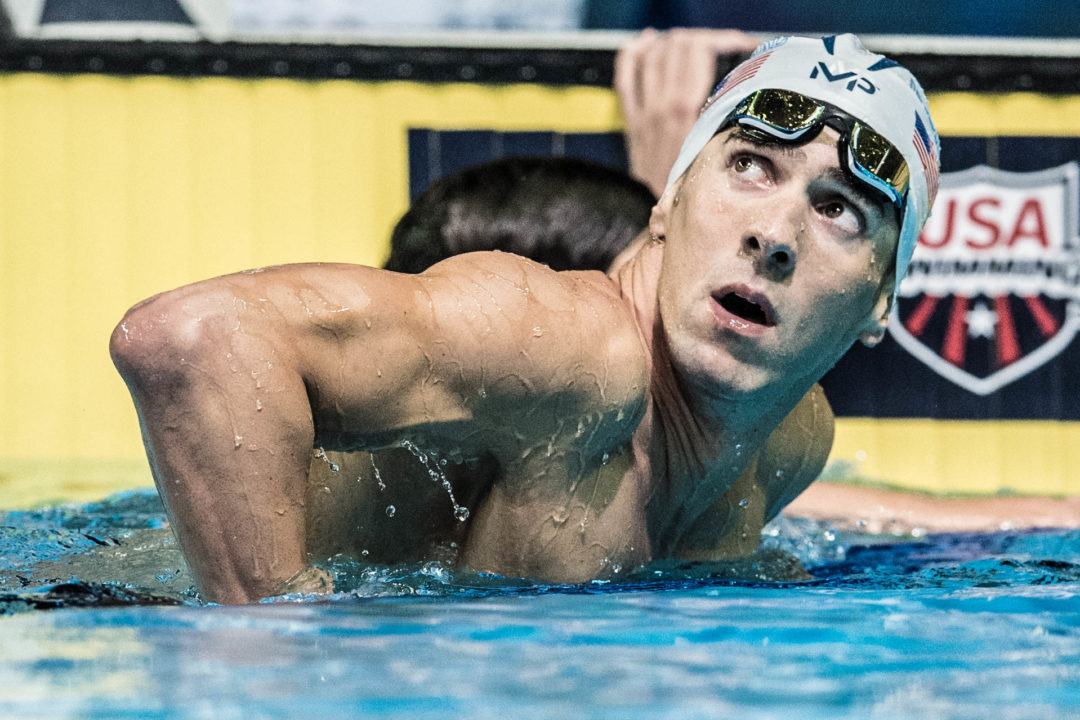 “That kid’s last 100 was incredible. He put together a great 200 fly from start to finish," Phelps told The New York Times. Archive photo via Mike Lewis/Ola Vista Photography

After 18 years of having the 200 fly world record on lockdown, Michael Phelps lost it this morning to Hungary’s Kristof Milak, who destroyed his old record.

Milak opened his race in the exact same 100 split Phelps did all those years ago: 52.88. But he closed in 57.85 (versus Phelps’ 58.63) to seal the record. Asked about the swim by The New York Times’ Karen Crouse, Phelps had nothing but praise for the 19-year-old.

“As frustrated as I am to see that record go down, I couldn’t be happier to see how he did it,” Phelps said. “That kid’s last 100 was incredible. He put together a great 200 fly from start to finish.”

“It happened because there was a kid who wanted to do it, who dreamed of doing it, who figured out what it would take to do it, who worked on his technique until it was beautiful and who put in the really, really hard work that it takes to do it,” he said. “My hat’s off to him.”

After winning gold by over two seconds ahead of Japan’s Daiya Seto (1:53.86), Milak said he wasn’t “expecting” the record, but “was prepared for it.” He added that he noticed bronze medalist and 2012 200 fly Olympic champion Chad le Clos with him two lanes over at the 100-mark, but then honed in on his own race. “But once I did my dolphin kicks, I started to focus solely on myself,” Milak told the Times through an interpreter. “I didn’t think of anything else, just my rhythm that I practice in training.”

An honest response from Phelps
“As frustrated as I am to see that record go down, I couldn’t be happier to see how he did it,”
A great start – he did just lose his record and it probably stung just a little bit
Then nothing but praise and admiration
A great honest response

beautifully phrased by the Goat 💙

Agree. What he left unsaid was that his records came in the midst of WC/Olympics schedules that would have killed mere mortals. Never had the luxury (once he hit the world stage) of focusing on one or two events only.

tbf, thats how he chose to compete and thats fine

Fair enough. I could rephrase to state he never “chose” the luxury of focusing his training, efforts, energy, and racing on one or two events to see how far he could take them. And hell, if I were him, I wouldn’t have either – there wasn’t much he couldn’t swim at a world-class level – including things he mostly ignored like backstroke, breaststroke, mid-distance free, etc. He and Lochte, in their primes, were so freakishly versatile. Dressel brings a little of that to the table – one reason I enjoy his swimming.

Michael, I promise to go easy on you if you come back

thats the mystery around Phelps – we will never know what he would have been in many different races had he trained more for them ….

Okay but there are a number of technical and sports science benefits now that were not available in the early 2000s.

Which is why ultimately times are not the main goal or measure of success.

Exactly. I probably would have been 48.5 in the 100 back LCM with all of the technical progress in the past 30 years! NOT. Amazing swim by Milak.

What is up with so many of you trying to take away from his accomplishment? Unusually high number of negative comments…
Just to mention some of the comments: “Technical benefits!”, “One event swimmer!”, “Not so busy schedule!”, “Peaty’s WR was better!”, “He will peak at 19!”, “But Phelps took time out from training!”, “But the GOAT had his googles filled up!”, “That record wasn’t his best anyways!”…

That may be true, but that doesn’t take away how impressive it is that a 19-year-old took down a seemingly untouchable world record.

Or if Phelps fully trained for the 2009 worlds his times would have been better there. He took several months after Beijing and just started getting back into shape by 2009 worlds. And then of course he really slacked off between 2009 and 2012. Bowman said after 2009 worlds one of the goals was 200 flu in the 149 range. That didn’t happen cause of sub par training though.

Wasn’t meant to be, and honestly doesn’t at all take away from Phelp’s accomplishments. Records are made to be broken. Phelps is still the GOAT. Would take a loooong time for someone to truly surpass what he did for the sport.

Wonder what it must’ve felt like watching the TV and seeing your unbreakable record get smashed. Congratulations Milak!

I would put his 400IM record above it for sure.

One could say it’s nice to be in rarified air where you can wonder such a thing.