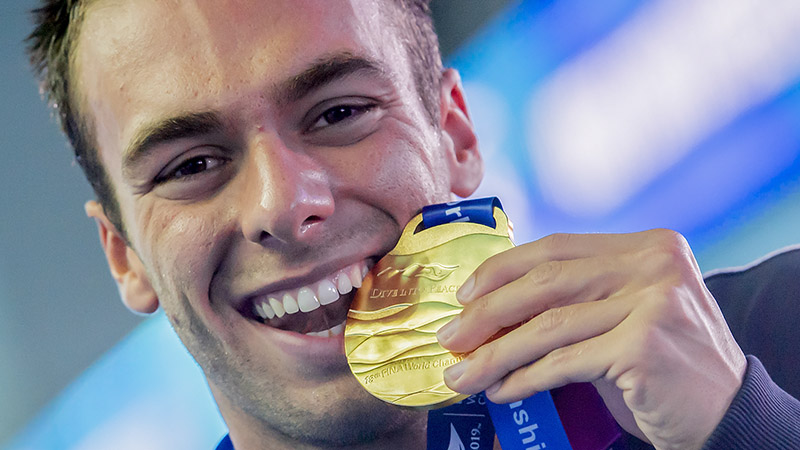 Gregorio Paltrinieri was on fire at the 2020 Sette Colli Trophy, setting the European record in the 1500 free at 14:33.10, the #2 time in history. Stock photo via Giorgio Scala / Deepbluemedia / Insidefoto

“I was feeling good… I was feeling fast”, Italian Gregorio Paltrinieri said after his 14:33.10 1500 free European record swim. Paltrinieri had already set the 800 free Sette Colli meet record (7:40.22) on day two of the competition, which was a second away from his lifetime best (7:39.27). Paltrinieri’s record-setting 1500 free swim knocked nearly a second off his lifetime best and Italian record times of 14:34.04, which was set at the 2016 European Championships. Later that year, he won Olympic gold in the same event.

Paltrinieri said that this swim was “the first sign in a long process”, especially after changing coaches two months ago and the Tokyo Olympics now moved to 2021. Despite the global pandemic, Paltrinieri had been able to continue regular training while living at the Ostia Swim Complex in his home country. During his post-race interview, Paltrinieri had admitted that the empty pool was weird, especially without the large crowds due to pandemic restrictions.

As originally reported by Retta Race.

Busting out the fastest 1500m free time of his career, Olympic champion Gregorio Paltrinieri sizzled with a time of 14:33.10 to take the gold in the final event here at Sette Colli.

Paltrinieri held the Italian national record with the 14:34.04 that he swam at the 2016 European Championships before winning Olympic gold a few months later. His former best time was also the European record in the event.

Flash forward to tonight and the unstoppable 25-year-old blasted the 2nd fastest performance all-time. Only Chinese Olympic champion Sun Yang’s World Record of 14:31.02 from the 2012 Olympic Games has been faster.

That’s a pretty monster swim. This guy could be the first one 14:30 next year. Glad to see that he improved his PB especially with Covid training. Hope he is able throw down an exciting race with Sun next year.

Swim politics aside, I don’t think Sun has thrown down a competitive 1500 since 2013. Should be looking at Wellbrock, Romanchuk, and possibly Bobby Finke after his ridiculous NCAA season.

franko grgic ahead of bobby finke. sun yang hasnt swum a 1500 final post 2014, period. he added 8 seconds just a year after his wr, which is well behind what paltrinieri just swam and has been consistently beaten by the big 3 in the past few years

Also nowhere to be found in the 100 and 200 breast, 200 fly at that meet. So not exactly like the U.S. men were going crazy outside of Dressel. Just not the glamor events in the U.S. A generation of guys grew up watching Phelps and Lochte, whose 4th or 5th best events were world class 200 frees. And then Dressel became the rage. Not like the Thorp/Hackett/Perkins era or the 70’s of Holland/Goodell/Demont. Everyone just wants to dunk now.

Would be very surprised to see Sun in the 1500 free (or any other race) at the olympics. I think it could be a 4-way battle between Paltrinieri, Wellbrock, Romanchuk and Grgić.

At this rate, I’d be surprised to see anyone in any race at the Olympics.

Aren’t we all forgetting about his 8 year ban? The only race he’ll have with Sun is racing that WR line

I believe that Sun is on a red card. That is, he has been accused of taking the wrong type of ‘smarties’, hence putting his appearance in next year’s Olympics in question. Well done to Paltrinieri and European Swimming.

“I was feeling fast” Well no S#!t, Sherlock…

He sure was! LOL

Arguably the greatest distance swimmer of all times, I’m rooting for a WR next year, even though I don’t like the virtual lynching Sun Yang goes through on a daily around here I still wanna see dopers scratched out of the record boards.

Ever heard about a guy named Vladimir Salnikov?

Salnikov would have been the first male swimmer (and the only distance swimmer by now) to achieve 3-peat at the Olympics, if Soviet Union didn’t boycott 1984 Olympics.

I think Hackett, Salnikov and Thorpe (Among others)have something to say about that.

Anyone else would love to see Thorpe racing 1500 in prime shape?

Perkins, Hackett, and Salnikov were all 2-time champions in the 1500 and medalled at Olympics 8 years apart. If Paltrinieri wins the Games next summer and breaks the WR, then I’d include him in the conversation for greatest ever.

You must have confused Kieren Perkins for Ian Thorpe.

Thorpe only did a couple of 800m internationally- of course he won and broke the WR, against Hackett!

Throw in Mike Burton. 3 NCAA 1650 titles, 2 Olympic 1500 meter golds back when swimming was entirely amateur and goggles were a luxury.

Perkins definitely elevated the event but I’d put Hackett and Salnikov ahead. Salnikov was robbed of the three peat as casas said.