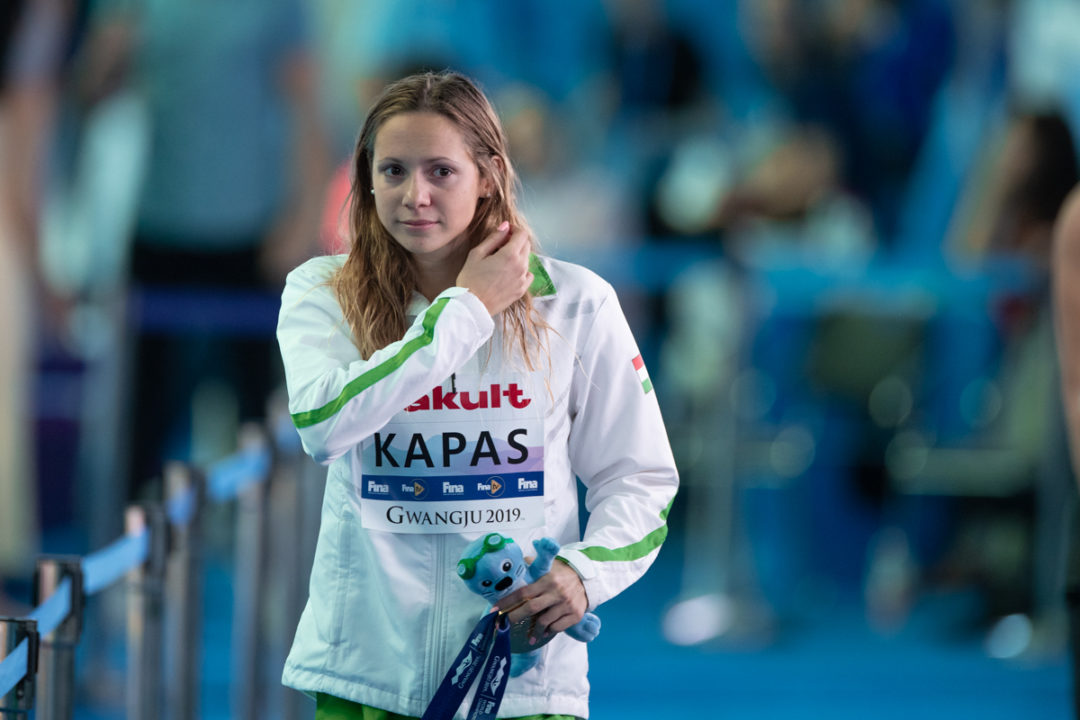 Hungary's Boglarka Kapas is the defending World Champion in the women's 200 fly. She might just get a free pass into the semifinals. Archive photo via “Rafael/Domeyko Photography”

Only 17 women are scheduled to contest the women’s 200 fly at the Tokyo 2020 Olympic Games. With one of those swimmers being a Universality entry almost 9 seconds slower than anybody else in the field, the rest of the entrants have essentially a free-pass into the semifinal.

The top seed in the event will be China’s Yufei Zhang, followed by Americans Hali Flickinger and Regan Smith. The defending World Champion Boglarka Kapas enters as the 4th seed and Katinka Hosszu enters as the 5th seed.

What’s even more interesting is that if Hosszu scratches, and she’s a prime candidate to do so after skipping prelims of the event in Rio, there would only be 16 entries.

FINA rule SW.3.2.2 seems to imply that, even at the Olympic Games, the preliminary events can be bypassed if they aren’t necessary, though no rule explicitly states what defines being necessary. That would, though, would require Hosszu to scratch ahead of time, which she didn’t do at the Rio Olympics.

SwimSwam has reached out to FINA for clarification on the rule, and whether a preliminary round would be bypassed at the Olympics.

Either way, the lack of pressure to swim fast in prelims will be a huge benefit for those swimmers like Regan Smith and Katinka Hosszu who have big event schedules lined up this week. The 200 fly heats come on day 4 of the meet, with semi-finals on day 5 and finals on day 6.

If that happens, it would be a historic moment for Honduras, as Julimar Avila Mancia would have the opportunity to advance to the semifinals and become the first Honduras swimmer to ever emerge from a preliminary round at the Olympics. She is seeded at a 2:18.38.

It also all-but-assures Remedy Rule a spot in the semifinals for the Philippines. The Philippines actually have two Olympic medals from the 1928 and 1932 Games when Teofilo Yldefonso won back-to-back bronze medals in the men’s 200 breaststroke, but Rule’s advancement would be a more modern anomaly.

The women’s 400 IM entries for Tokyo only have 19 swimmers, though with no semi-finals in that race, it would require many more scratches to ask the same question.

As even compared to the 2016 Olympics, both events have much smaller fields. In Rio, there were 28 entries in the women’s 200 fly (minus Hossuz’s declared false start) and 33 in the women’s 400 IM.

So what changed? It makes sense that you wouldn’t see a lot of universality entries in these more grueling events, as developing swim nations tend to focus their efforts on shorter and more manageable races. In Tokyo, there were far fewer Universality spots available because of the top nations sending more athletes with “A” cuts. What’s more, with the COVID challenges created for gaining access to training, it makes some sense that these longer events would suffer in internal rankings – where countries were required to send their top male and female by FINA points for Universality.

There weren’t many Universality choices in these races in Rio either. Rather, it seems as though there are far fewer “A” cut swimmers in these events and far fewer invites for “B” cut swimmers.

Remember that “B” cut swimmers actually receive a lower invite priority than do Universality swimmers. So with a smaller field invited this year (the cap was 878, though only 855 were on the initial entry lists), “B” cut entries will suffer. “B” cut swimmers are chosen by the highest World Ranking as of the June 27 end of the qualifying period.

All of the above comes under the absence of defending Olympic champion Mireia Belmonte of Spain, who is swimming other events in Tokyo but who didn’t actually earn a qualifying standard in the 200 fly.

The stagnant 200fly is part of the reason that insane WR looks so inhuman. It is, there’s no denying it, but it’s also relative. 2:01 looks crazy when no one is even swimming 2:04s at the moment. But the event is weak to a greater extent than that WR is strong. Imagine a ledecky or milak level talent coming along, they’d make us reevaluate what is possible.

Would be interesting if Hungary would win 2 medals each in both 200 flys Ever happened?

I don’t know what does downvotes mean here. Jealousy only. Katinka is the question about this. Milák will win, Kenderesi will win silver, and Kapás wil win medal, perhaps gold. So?

I think it is very unlikely Hozzsu gets a medal but Hungary look good for getting 3 medals.

Because she missed the qualification trial for the major events against Kapas and Szilagyi . Even though she had have a better timing slightly after the trial than the other two. Now Szilagyi is out so Hosszu can re-establish herself…

As soon as I read this tittle, I thought of Rodney Dangerfield’s movie Ladybugs.

Nice to know that my niece should have no problems making the semis for the 200. As for the 100, that’s a different story.

Lol only 4 countries even have 2 entrants. At best you’re introducing 4 extra swimmers who aren’t going to medal.

I somehow doubt that 4 unremarkable swimmers in the women’s 200 fly is going to be the difference between life and death for the sport of swimming.

Right know only 3 countries would have 3 swimmers, Hungary had 4 Fina A-cut swimmers in this event: Jakabos end Szilágyi had a time under 2:08.

China and the USA would be the two other.