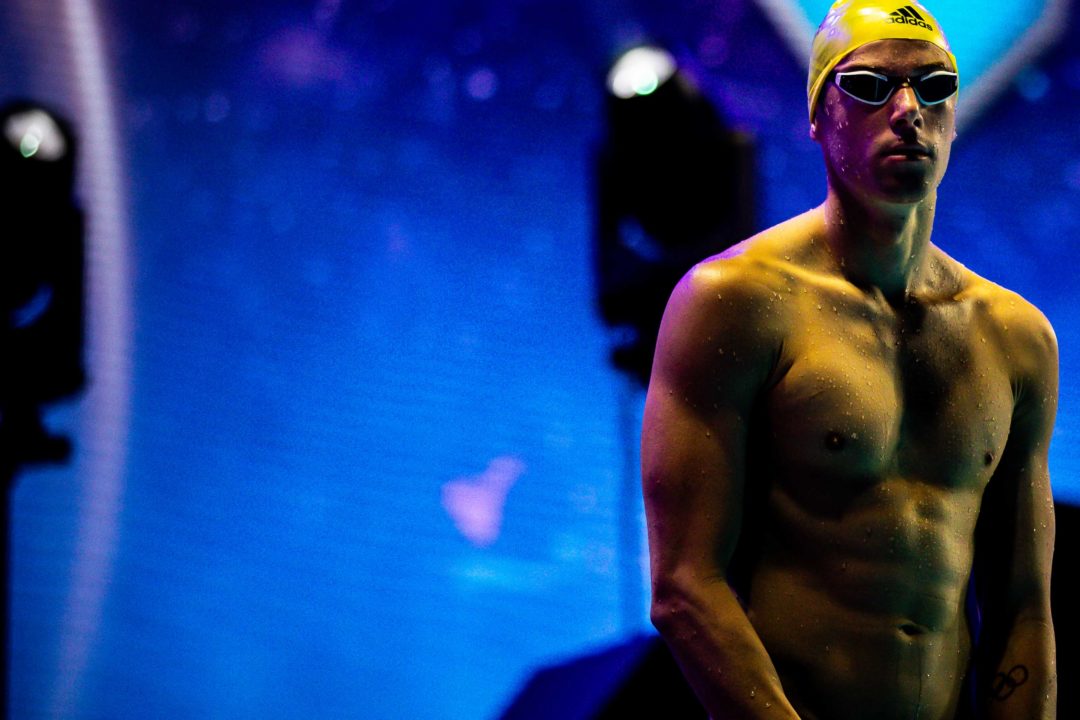 Former Cal Golden Bear and 2016 Olympic medalist Josh Prenot is one of several former national teamers who will compete at Master's nationals this weekend. Current photo via Jack Spitser/Spitser Photography

US Masters Nationals kicks off at the Northside Aquatic Center in San Antonio this Thursday with over 1800 athletes entered to compete. Athletes from across the country, ranging in age from their 20s to their 90s, will converge on south-central Texas, and several former US National Teamers are scheduled to compete.

Davis has long been a proponent of US Masters Swimming and has competed at these nationals for years, holding USMS records in both the 35-39 and 40-44 age groups.

Former US National Teamer and Stanford swimmer Eugene Godsoe is entered as well. Godsoe, who won four total medals at the World Championships in his career, is entered in the 50 free, 50 fly, 100 fly, 50 back, 100 back and 200 back. Godsoe will be representing New York Athletic Club at the meet.

Racing kicks off on Thursday with the 1000 and 1650 free and will continue with three full days of racing Friday through Sunday.

I swamed with her tough swimmer hard worker

Ah! Another National Teamer – I knew Bobby Savulich was good but didn’t know he had made a National Team. Man, why does my age group have to be so dang fast…
https://swimswam.com/national-teamer-bobby-savulich-announces-retirement/

Tim Phillips was a national teamer at one point, wasn’t he?

2
0
Reply
PVSFree
Reply to  JP input is too short

That NYAC training group must be insane – three former National Teamers in Tim Phillips, Tom Luchsinger, and Eugene Godsoe and then just a who’s who of former NCAA All Americans with people like Zach Fong and Ally Howe

As far as I’m aware, at least as of when I looked into it 7-8 years ago after noticing a lot of fast people at USMS Nats prepping NYAC, it’s kind of a sponsorship thing vs an actual club. At that point back in 2015 or so, there were quite a few NYAC repping swimmers who weren’t based in NY.

One of my Masters swimmers, now in her late 40s and comfortably past her competition heyday, though she was legit back in the day, has a NYAC cap but never lived or trained in NY. I could probably ask her what the deal is!

Some of them don’t even live in NY

I’ve had the privilege of “racing” Anthony Ervin, Matt Grevers, and Clark Burckle in various events at USMS Nats over the years, it’s fun! Due to work commitments, I had to miss out on a few years, but I’d have had a chance to “race” Adrian and Lochte, too, if I’d been able to go to those Nats.

If only this meet coincided with my scheduling.
Nevertheless should be an exciting meet!

gurl bye. you’re going to be that old soon enough.

“ you’re going to be that old soon enough” only if you are lucky.

Ya got me there Lil Swammy 😂

When you grow up, are you gonna drop the “Lil”?

Nah, these young pups aren’t old. What is old, and absolutely awesome, is the 1952 Olympic gold medalist in the 100 back winning his age group at USMS long course Nats last year by a figurative mile with a time that isn’t much slower than my cruising pace.