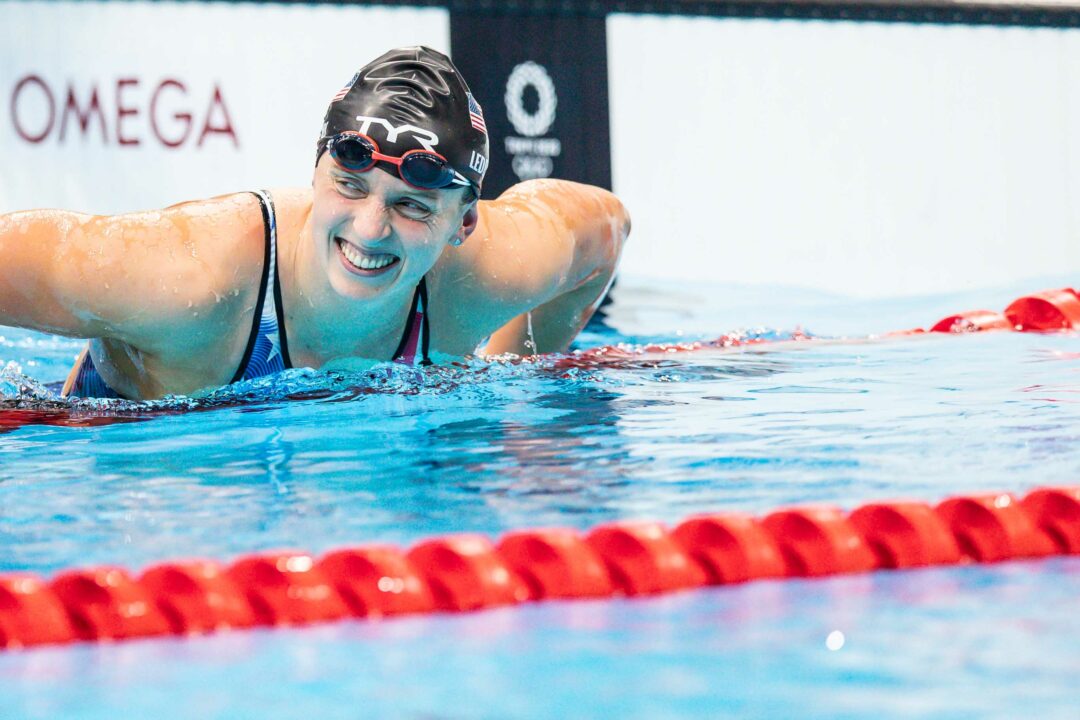 It would come as quite a shock if Katie Ledecky doesn't win the 400 free this week. Current photo via Jack Spitser/Spitser Photography

It would come as quite a shock if Katie Ledecky doesn’t win the 400 free this week. The World Record holder is seeded 6.6 seconds ahead of anyone else in this field, and her personal best is over 4 seconds faster than anyone else’s in this field. Since her move to Gainesville to train under Anthony Nesty, Ledecky has swum well.

She popped off a 1:54.66 200 free in February, before swimming a 4:00.95 400 free at the same meet. Ledecky has been 4:00-point in the 400 free twice already this season, first at the U.S. Open in December, and second at the 2022 FL SZ South Sectional Championships in February. She has yet to break 4:00 this season, a mark which we can fairly confidently project she’ll break at this meet. While Ledecky certainly doesn’t need a full taper to safely qualify for the World Championships team in the 200, 400, 800, and 1500, she and Nesty may want to get a reading on where she’s at with her racing right now.

Ledecky would need to blow away her season best in order to crack her U.S. Open Record of 3:57.94, however, it’s not out of the question.

Other Veterans Ready to Make their Mark

It was UVA alum Paige Madden who took the 2nd spot on the Olympic roster last summer, finishing behind Ledecky at the Olympic Trials. The NCAA Champion would go on to swim her lifetime best of 4:03.98 in prelims of the 400 free in Tokyo, qualifying for finals. In finals, she was slower, but still grabbed a 7th place finish with a 4:06.81.

Emma Weyant is the #5 seed coming into the meet. The NCAA runner-up in the SCY 500 free is primarily an LCM 400 IM’er, winning the Silver medal in Tokyo last summer. However, Weyant is an excellent freestyler as well, and she improved by nearly 4 seconds in the 500 free this year. Weyant’s personal best in the 400 free comes in at 4:09.07, a time which she swam back at the 2019 U.S. Nationals when she was 17. Given her improvement in the yards 500 this year, it’s plausible Weyant drops a few seconds and gets up there with the group battling for second.

Another veteran in the field is Hali Flickinger. Flickinger has the 4th fastest personal best in the field, coming in at 4:06.72. Now, based off her peak meets in the past, there’s a good chance Flickinger ends up scratching out of this event. However, it’s also possible that with a thinner field than we’re used to seeing at U.S. selection meets Flickinger might see her best opportunity to try and qualify for a World Championships team in the 400. Flickinger has swum very well since teaming up with Bob Bowman in Tempe, and if she ends up swimming the race, it’s not out of the question that she could challenge for a 2nd place finish.

A Deep Group of Juniors

There is a deep group of 17&unders in this field. Starting with Bella Sims, a Sandpipers of Nevada 16-year-old who won a Bronze medal on the 4×200 free relay in Tokyo last summer. Sims is the #8 seed in the event, seeded with her personal best of 4:10.25, which she swam last April. A 1:57.53 200 freestyler, Sims represents a threat in this field, since we know she has the 200 speed to keep up with Paige Madden, Leah Smith, and potentially Hali Flickinger on the front half of the race. As an 8:23.55 800 freestyler, we also know she has the endurance to back it up.

Another young swimmer to keep your eyes on is Katie Grimes, another Sandpipers 16-year-old. Grimes was an Olympian in the 800 free last summer, finishing 4th, just a second off the podium. Don’t be fooled by Grimes because she’s entered at 4:11.17. She has a personal best of 8:17.05 in the 800 free. You may be thinking to yourself hmm well that doesn’t quite add up, and you would be correct. In her best time 800 free performance, Grimes flipped in 4:07.51 at the 400m mark. Remember, that split included a turn at the end rather than a finish, so we can safely say if she had simply touched the wall with her hand there she would have been a 4:06-point, and that still came on the first half of an 800.

One more Sandpiper, Claire Weinstein, represents a threat here. Weinstein, who recently turned 15, is the #9 seed with a 4:11.11. After moving to Las Vegas to train with the Sandpipers this past fall, Weinstein has been on a phenomenal track. She dropped huge amounts of time in the SCY 100 free, 200 free, 500 free, and 1650 free this past fall, and has already swum personal bests in the LCM 50 free, 100 free, and 800 free in 2022. Given the trajectory of her swimming over the past 8 months, it seems likely Weinstein will get under 4:10 in the 400 free this week.

Nation’s Capital’s Erin Gemmell is another name to watch. Gemmell swam her personal best of 4:09.81 on April 1st, breaking 4:10 for the first time. The swim came after she swam a monumental 1:57.41 in the 200 free earlier in the meet, which bodes well for her ability to take the 400 out quickly. We don’t know how much rest Gemmell took for the Speedo Sectionals meet in Indianapolis at the beginning of the month, but if the U.S. International Team Trials have been targeted as her peak meet, it would seem she’s primed for another personal best in the 400.

Long Island Aquatic Club’s Cavan Gormsen swam her personal best of 4:09.85 at the Olympic Trials Wave II last summer. Nearly a year later, she could have a big swim in store for this week. While Gormsen was a bit off in most of her yards freestyle races this past fall, she did swim a new personal best of 4:37.90 in the 500 free in February of this year. That’s a good sign for her LCM 400 free.

Other young swimmers to keep an eye on include Katie Crom, Michaela Mattes, Hannah Bellard, and Kayla Han, all of whom find themselves seeded just outside the top 10.

Trials was an off meet for Smith. With the way she’s been swimming, I don’t see her not making it.

crazy…. what a strong and young field

Time for the youngsters Sims, Grimes, Weinstein and Gemmell to shake up all of that and get closer to the 4-minute barrier this year.
Behind KL it sleeps for too long in the 400 free.
Same as in the 200 free.

I am rooting for Erin Gemmell. Not because she is among favourites at 400 distance, but because she is a daughter of Bruce Gemmell. The coach that I respect very much and who produced already two olympians. The coach who got into tears seeing how the four years of his dedication resulted in tremendous success of his swimmer. The coach who understood fully the responsibility of managing such an unique talent as Katie Ledecky. And the coach who has a master degree in engineering and had a working experience in this field.
Erin’s sudden 1:57 time in 200 this season gives a hope that we may got finally a young contributor to the 4×200 relay that is getting pretty… Read more »

I think Paige is trending down to the 200 post college and per her/Todd she almost didn’t swim the 400 at trials. She’s also only done 1 400 this year, so I would definitely have Smith over her as Smith seems to have found her mojo again.

400LCM is a tricky event. It’s definitely not s sprint since noticeable part of the distance swimmers do on cruise control. But it isn’t a long distance neither. Bobby Finke said that he cannot race at 400 because it’s too fast.
There are two historic distinctive group of challengers in this event. One I would call “400-800”. And another one – “200-400”. The former is more populated, but the later one is brighter. I would go with Paige Madden.

Where’s Claire Tuggle? Why isn’t she on the psych sheet?