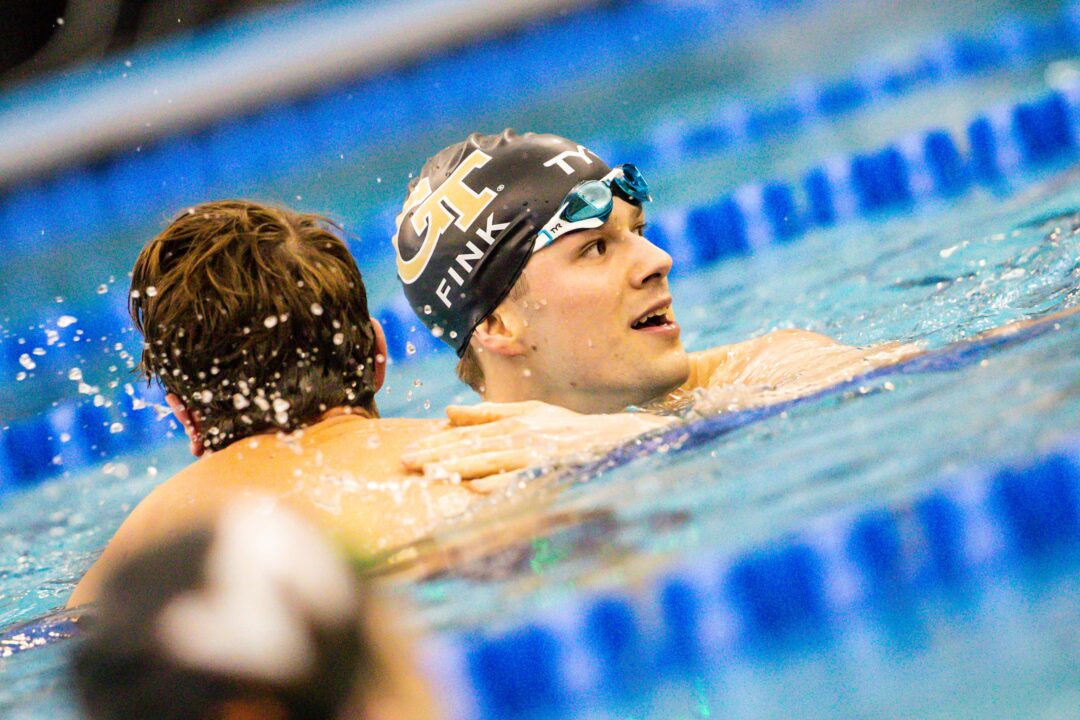 28 year-old Nic Fink just keeps on improving and he's now the sixth-fastest man in history after going 58.37 to win the 100 breast tonight in Greensboro.

28 year-old Nic Fink just keeps on improving. Last year, he moved to #2 all-time among U.S. swimmer with a 58.50 in the Olympic Trials of the 100 breast before finishing 3rd in the finals. This week, he’d already qualified for the Worlds team with a tie for 1st in the 200 breast, but tonight he won the 100 breast outright, lowering his personal best to 58.37.

That mark moves him up from #8 to #6 all-time in world history.

Again, Fink was already the 2nd-fastest US man ever in the event, behind Michael Andrew, and tonight he defeated Andrew, with Andrew taking 2nd in 58.51.

With Andrew’s personal best being about two-tenths faster than Fink’s, but Fink winning here tonight, this sets up an interesting sub-plot in Budapest regarding how the US men’s medley relay may shake out. The good news for the US coaching staff is that they should have several data points between now and that medley relay, which occurs at the end of the swimming competition. The men’s 100 breast will be contested on Saturday and Sunday, the mixed medley relay will take place on Tuesday, and the men’s medley relay won’t happen until the second medley relay.

Fink won medals in all three breaststroke events at last year’s Short Course World Championships, but he will be looking for redemption of sorts after the 2015 World Championships, where he didn’t make the final in this event, and ended up not making the US’s medley relay team, in a fairly unusual move.

But Fink has steadily improved in the years since then, and he now looks ready to play an integral role on the US team in Budapest.

Fink and Andrew were excellent but the rest of the field really were quite far back without anyone else getting under a minute, let alone the Fina A time…

On the side note, even though Andrew didnt PB I think 58.51 is a great result. He has proven to be consistent under 59″ which will final at any big championships.I also like his more controlles approach to the race. His backhalf looked solid. Fink was simply better today. With all those young swimmers retiring its nice to see someone hitting his prime at 28 years old

I notice Cody Miller has gone back to his original pullout where he takes the dolphin kick before the pull. No actual complaints here, since it is legal, but I just thought it was an interesting observation since he did make that ~20 min video about how he was changing his pullout permanently. I looked up his Olympic Trials video and it looks like he did the same (https://youtu.be/KNOA5TYnACk). Makes me wonder did he ever actually change it? Again, I’m not gonna condemn him for using the FASTER, legal method, but I just thought it was interesting after all that was said about it.

Nice swim. Not a tough call at all. Whoever is faster in 100 at Worlds is on the A mens and mixed medley. What happened last year was last year

Yeah, that us medley is looking a okay

Peaty doesn’t have the advantage he used to have over the us breaststrokers, while the us backstroke leg and dressel (fly leg) have as much or move advantage over last year