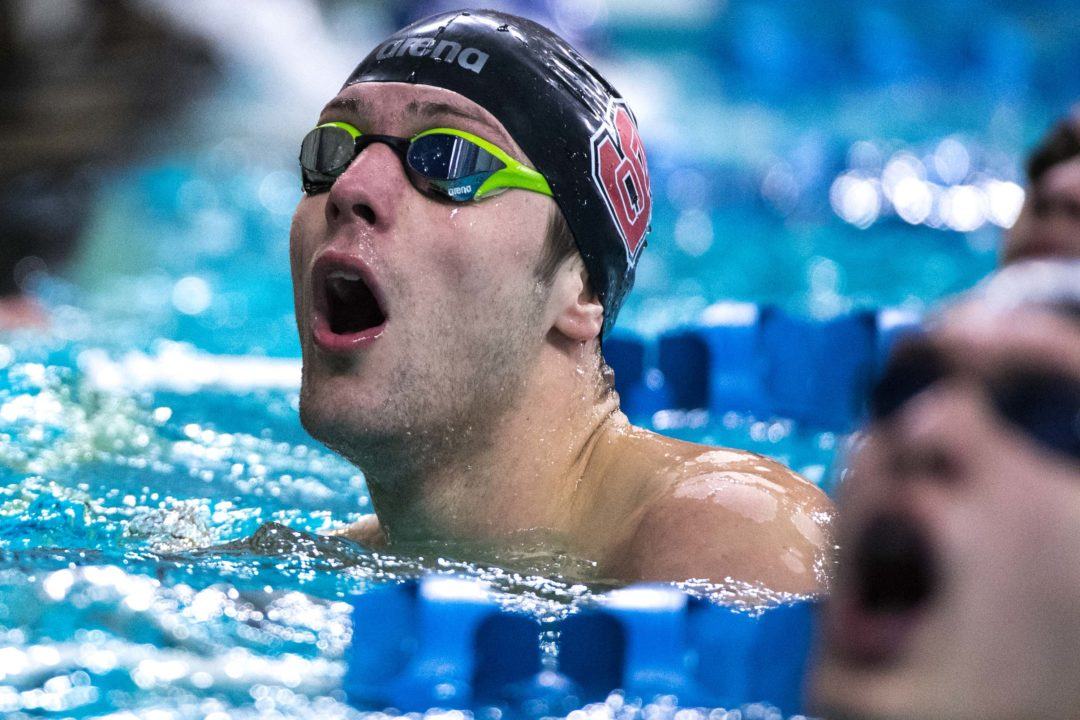 If there was any doubt that NC State has evolved beyond just a talented sprint school, tonight eviscerated it. That's because the Wolfpack themselves eviscerated the fastest time ever done in the 800 free relay to take an early team lead at NCAAs. Archive photo via Mike Lewis/Ola Vista Photography

If there was any doubt that NC State has evolved beyond just a talented sprint school, tonight eviscerated it. That’s because the Wolfpack themselves eviscerated the fastest time ever done in the 800 free relay to take an early team lead at NCAAs.

NC State’s team of Ryan Held, Andreas Vazaios, Justin Ress and Soeren Dahl combined to go 6:06.53, crushing the previous U.S. Open and NCAA record by a second and a half. That old record was set last year by the Texas Longhorns, who finished second in this race, but did break their own American record.

Held, the team’s sprint superstar, had a massive 1:31.37 leadoff leg. That would have ranked #4 all-time prior to tonight, though two other swimmers pushed into the top 3 (read more about that here) and bumped Held’s time back to #6.

Vazaios was 1:32.23, Ress 1:32.26 and Dahl 1:30.67 on the anchor leg fighting to hold off a charging field of elite swimmers including American record-holder Townley Haas of Texas and Olympic star Ryan Murphy of Cal. Dahl’s time stands up as the third-fastest relay split in history and makes him the second-fastest relay performer all-time. Haas owns the top two splits at 1:30.42 (from this year) and 1:30.52 (from last year).

Dahl represents Denmark internationally and Vazaios Greece, which means their record isn’t eligible for American record status. But it does break both the NCAA and U.S. Open records, tracking the top collegiate swim and the fastest swim done on American soil.

Wow… I hope NCS rides this momentum to take it all this year.
That would be so great for North Carolina and the ACC.

Is there archived video anywhere?

Wow, NC State… 1:31.3 lead off, couple of 1:32.2s, and a 1:30.6 anchor. Obviously there’s the argument that Texas didn’t have Schooling in there and if he had swam the second leg and gone 1:31-1:32 then things could have turned out very differently. But then you could also say NC State would’ve have been pushed to swim faster and they’d still win.
Either way, NC State pulls off the win in reality.

The Danes are certainly proving to be more than just b-final points this year.

His legs on that last 100… holy moly. It’s like he never gets tired.

Live results are from the women last week… please update!!!!

JDawg- it’s the same link. It’s working, so you may need to clear your cache and try again.