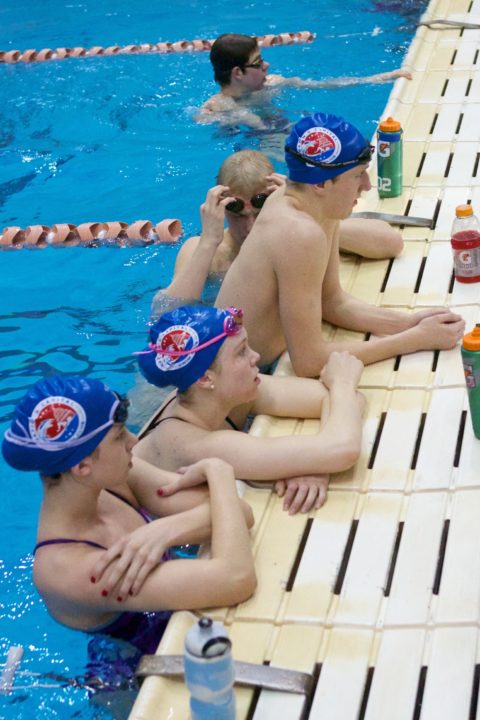 Nation's Capital Swim Club was dominant at all age levels, powering away to the overall Virtual Club Championship title for the long course 2013-2014 season. Archive photo via Rafael Domeyko, rafaeldomeyko.com

With the summer long course season all but wrapped up in the U.S., USA Swimming offers a unique way to look back at the season across all clubs, states and age groups with the Virtual Club Championship. This season it was Nation’s Capital Swim Club that won the title.

The virtual club championship works like this: each club’s top two swimmers in every event and age from 11-17 earn points for their club. For example, the two fastest 11-year-old 50 freestylers from a given club earn Power Points for their races. Those points are added to the top two 11-year-old boys, the top two 12-year-old girls, so on and so on, with the team earning a combined total that ranks against all other USA Swimming clubs.

Though the season technically includes all long course swims from September 1, 2013 to August 31, 2014, the brunt of the long course swimming is done for the season, and it doesn’t appear that the order will be changing much over the next 6 days.

Nation’s Capital has been probably the most prolific club in the nation this season, and the numbers back that up. NCAP leads all teams with 275,987 points, over 18,000 more than the nearest competitor. Keep in mind that individual swims rank around 500 to 1000 points, with 700 being a very good swim and over 1000 being an unbelievable one. (Katie Ledecky‘s 1500 free world record from Pan Pacs is 1,138 Power Points).

NCAP has a giant roster of stars, from the Ledeckys, Andrew Seliskars, Carsten Visserings and Janet Hus of the older ages to swimmers like Matthew Hirschberger and Cassidy Bayer in the middle age groups down to Katie Mack and Brett Feyerick in the younger divisions.

The winners aren’t a huge surprise, and the rest of the top 3 probably won’t shock you either. North Carolina’s SwimMAC is number two, sitting at 257,712 points, while Georgia’s Dynamo Swim Club is third at 253,241. SwimMAC has become well-known for its professional group, but also features a strong lineup of age groupers like Kathleen Baker and Nora McCullagh, both 17. Dynamo has a number of high-profile junior athletes itself, including the Litherland triplets (Mick, Kevin and Jay), and Georgia commits Gunnar Bentz and Kylie Stewart.

Georgia swept spots 3 and 4, with SwimAtlanta hot on the heels of Dynamo for third. California and Virginia were the only other states with two clubs in the top 10.

You can find the full lists, plus sort by state and LSC, by following this link.

Is there any way to tell how big these teams are? I feel like VCC favors large teams… It would be fun to know how teams stack up relative to size… NBAC is under 250 swimmers compared to the top 3 which are all easily 3 times that.

NBACjoe – there’s no easy way that we know of, though as you said, those who spend enough time on SwimSwam know that some of these teams are very big and some are very small.

We’d like to work on a project some time figuring out exactly how many registered members these teams have. Maybe that will be something we can work on this winter.

There is the limit of two swimmers per event and 4 events per swimmer… but obviously if you have a larger team you have more options to choose from. In theory you need just 20.5 swimmers of each gender to fill out the VCC completely (of course they would have to be specifically aged, and have the right events swum, etc)… my best guess would be you could fill out every event with a team of about 200- using about 40 girls and 40 guys aged 11-over. I’ve seen some teams as small as 200 crack the top 50… but I would say in general 300 is your best bet for getting in the top 100. The top 10 is… Read more »

NOVA of Virginia is a one site club.

You are correct. My bad 🙂

Though, I’d say that their one facility is one HECK of a facility.

How are the Power Points determined?
How are they different from the Fina point scores?
How many points did “The Flounders” get?

This is how I understand it… i could be wrong… Power points were based on off some top time lists over a 10 year or so period… the idea being that a 1000 point swim was right around the NAG at the time and a 800 pointer was right around the top 50 at the time and a 500 pointer was at about the same relative distance off the NAG in every event. Obviously age group swimming has gotten quicker so those are slightly off now… but I still like power points over ABC times. ABCs are based off percentiles and that leaves things lacking for me. A AA time in the 100 breast means (I’m not exactly sure if… Read more »

Well thanks guys. I’m convinced now that my breaststroke would put me at a negative point total.