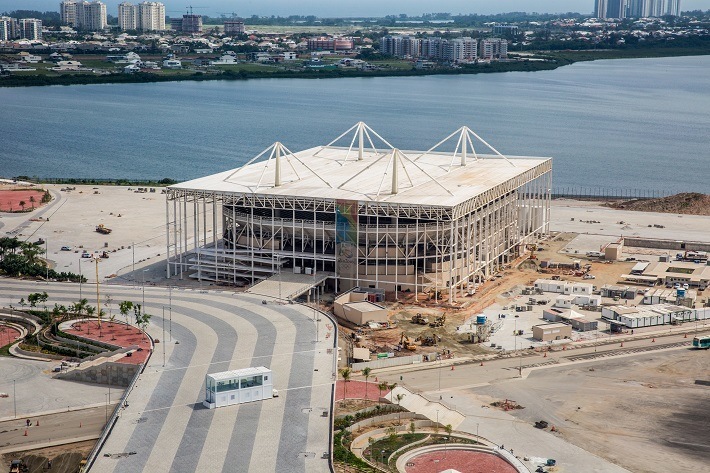 While open water athletes have already had to contend with recent reports that Rio’s water pollution problem is only growing, now those who want to see pool swimming have a problem of their own. According to a report from Globo Esporte, construction required the installation of massive steel support pillars that will create blind spots at the corner of the stadium.

The result will be a reduction of 1,250 seats to the venue. Such a blow might have been mitigated had the seating capacity for Rio not already been considered too low by Olympic standards. The reduction takes the aquatic venue’s capacity from 13,750 to 12,500. London’s aquatic venue seated nearly one and a half times that amount at 17,500. One has to return to the similarly plagued venues of Athens in 2004 to find a similar capacity (11,500).

Within Brazil, where focus is on the economic impact of the games, the story is similarly negative. The installation of the support pillars mean that the Olympic Aquatics Stadium will now have a cost overrun of 10.5 million real (2.8 million dollars). Likewise, the lost ticket revenue from the reduced capacity will be roughly the same amount (10.6 million real).

The venue is also controversial within Brazil because organizers have said it will be temporary and thus far there are no plans to reuse the pool at another location, as the US has with it’s Olympic trials pools the last few cycles.

I’m half expecting in the coming weeks reading more of the same. To save some money, none of the venues will have seats. Everyone being your own chair. The athletes can all have their ID lanyards made at home before coming to Rio.

This is one horrifying mess. The IOC can’t just keep flying blind when we get to January, six months out. Or can they?

As long as the athletes dont have to warm up/down in the lagoon it should be fine. I hope they still have the warm up pool in the budget. They really haven’t done any of the finish work on the facility, right now its just bleachers and a cement hole in the ground so at this point it could still be a really nice facility if they finished it off the right way

Sydney, Beijing, and London had incredible swim stadiums, and WC venues like Kazan and Barcelona were great also. It sounds like Rio won’t be to par. Let’s make the best of the situation, and let’s be honest: it will still be “THE OLYMPICS.” The top two swimmers from every country* still make it to the meet. The meet will STILL be about who gets to the wall first, even if conditions don’t prevail for world records. I still look forward to great racing. The swimmers better prepare to race, even in world records aren’t in the cards: that’s what we’re all looking forward to anyway. Frankly, if I won an Olympic medal, I wouldn’t care if I got a WR/OR/AR… Read more »

Take the games back to London. This is ridiculous.

Seriously guys -oil is today at $37 a barrel. Brazil does not have the reserves to push this Rio thing through in the style to which you are accustomed. Accept it as a revised spared down experience or stay at home .

Hope the aquatic center facilities are adequate for the athletes so our swimmers can perform at their best. These kids have spent years preparing and deserve a decent experience.

We were spiked with Beijing and London. These Olympics are gonna be terrible.

I think spiked is good . when the political winds change , stuff will miraculously appear.

Look on the bright side… because the finals are now 1am, 2am, etc. most spectators will be asleep and not need to see the races properly so “restricted viewing” is OK.