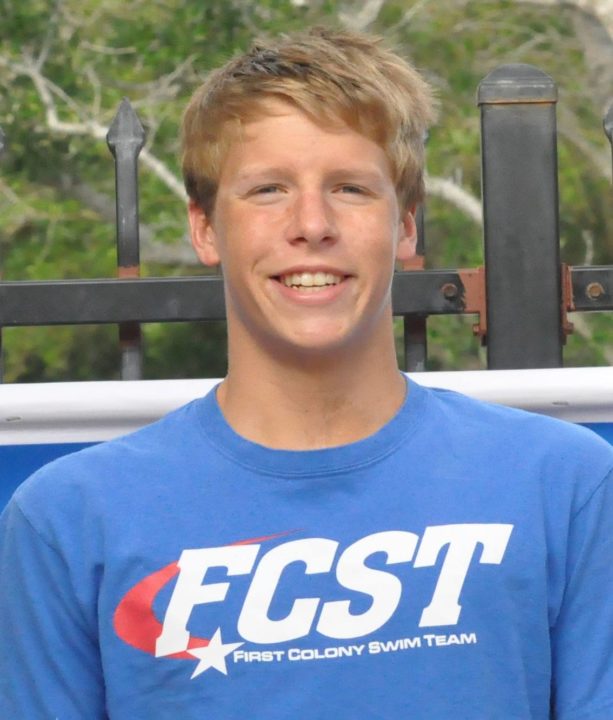 Missouri coach Greg Rhodenbaugh has been gaining bigtime momentum in the last few months in Columbia. His men’s and women’s teams both had great seasons, they were bringing in great recruits, they even got a huge transfer in All-American Shara Stafford from Florida (albeit for only one year).

Rhodenbaugh’s latest recruit is a sign of that momentum, as they’ve signed Daniel Graviss out of the First Colony Swim Team in Houston, one of the rising programs in the country, to build out their distance freestyle group.

Graviss made his biggest statement last week at the open water National Championships by finishing 5th in the 5km swim and 8th in the 10km swim.

It’s no surprise, then that in the pool he brings his biggest value comes in the distance freestyles. He has bests of 4:30.4 in the 500 and 15:29 in the mile. But neither of those times is a true peak for him. While preparing for open water Nationals during his senior season, he didn’t really get a chance to improve upon those marks as he was preparing for the open water meet. He didn’t even swim individually in the Texas high school post-season – after missing the District Championship meet, he was relegated to relays at the regional and state level (in Texas, the only way to advance to those levels is directly through the regional and district meets).

Relays, especially at the high school level, doesn’t exactly lend itself ideally to a distance swimmer of Graviss’ abilities, but he still performed admirably with a relay leadoff of 21.84 in the 50 and an anchor of 47.82 in the 100 for Elkins High School.

But it’s the middle-to-distance freestyles where he’s going to be really valuable for the Tigers. He’s also got a 1:41.75 from midway through his senior season in the 200 free – which is probably in the 1:30’s on a taper.

Rhodenbaugh did some big things with the big freshman distance swimmer out of last year’s class – Eegan Groome. Groome came to Columbia with similar times to what Graviss’ project to on a yards taper this year, and ended his season with an invite to the NCAA Championships. That’s an invite earned in a year where invites were extremely difficult to come by. That bodes well for Graviss’ first year in town.