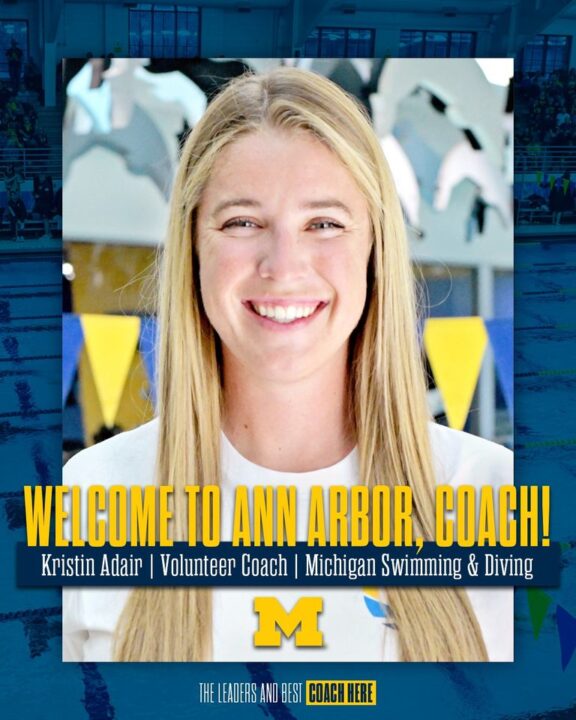 The University of Michigan Swim and Dive program has recently announced the addition of Kristin Adair as a volunteer assistant coach. She is scheduled to begin for the 2022-2023 season.

Adair will be coming to Ann Arbor from Phoenix, Arizona where she was the Associate Head Coach and National Group Sprint Coach at the Gold Medal Swim Club. She previously coached the Rio Salado Swim Club, before they merged with Gold Medal in the fall of 2021.

Last May, Michigan announced a 5-year contract extension for head coach Mike Bottom. He has been the men’s swimming & diving head coach since 2009, and began also leading the women in 2013. During his time with the Wolverines, Bottom has coached the men’s team to eight top-10 finishes at the NCAA Championships, winning the national title in 2013. He also led the women’s team to a Big Ten three-peat, winning Championships titles from 2016-2018.

Michigan has recently lost many of their stars, as names like Maggie MacNeil, Jake Mitchell, and Patrick Callan have all transferred to different schools for 2022-2023. The remaining team and incoming recruits will need to work to remain competitive in the conference without some of their top point-scorers.

Believe U Mich is in Ann Arbor, not Marquette