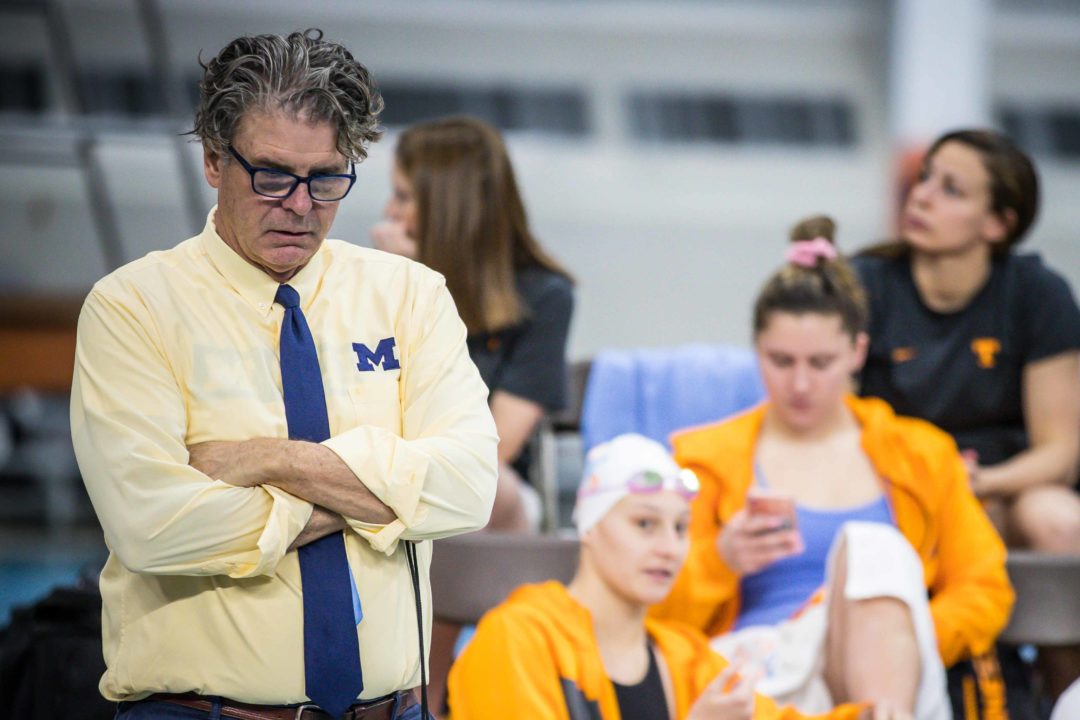 The University of Michigan head coach Mike Bottom will be staying in Ann Arbor through the 2026-27 season. Archive photo via Jack Spitser/Spitser Photography

The University of Michigan has announced a five-year contract extension for head coach Mike Bottom, keeping the long-tenured coach in Ann Arbor through the 2026-27 season.

Bottom has been the head coach of the men’s swimming & diving program at Michigan for the last 13 years, and has also led the women’s program for the last eight seasons beginning in 2013.

“I am thrilled to extend Mike’s leadership of our men’s and women’s swimming and diving programs well into the future,” said Michigan Athletics Director Warde Manuel. “Mike is passionate about this university, the sport of swimming and diving, and his student-athletes, and I look forward to his continued enthusiasm and guidance of our combined programs.”

During his time with the Wolverines, Bottom has coached the men’s team to eight top-10 finishes at the NCAA Championships, highlighted by winning the national title in 2013.

He also helped propel the women’s team to three straight Big Ten Championship titles from 2016 to 2018, the program’s first conference three-peat since 1996-98.

“I would like to thank Warde Manuel for continuing to have faith in me and my staff to lead this great program,” said Bottom.

“As I enter this multi-year agreement as the head coach for the Swim and Dive program, I recall what I learned when I started here; that in order to win championships you have to have the support of many people pushing in the same direction. I look forward to leading those who are here and those who choose to join us in the future. Those who stay will be champions! Go Blue!”

Click the link below to read more!
⬇️⬇️⬇️https://t.co/gXWejwVCrh#GoBlue 〽️

Bottom is a six-time winner of the Big Ten Men’s Swimming Coach of the Year, earning five straight titles from 2011 to 2015 and then adding another in 2020. He was also named CSCAA Coach of the Year in 2013.

Bottom has also coached more than a dozen Olympians over the course of his career, most recently Canadian Olympic gold medalist Maggie MacNeil.

Mike Cavic did an interview about how he stopped at Michigan to train and had a conversation about who Michigan wanted on their team vs When Mike was at Cal. It puts this in perspective.

Interesting. Rumor has it he’s been applying for lots of jobs over the years. Stanford a few years back and Notre Dame this past year. Wonder what the real story is.

As a great woman once said: “haters gonna hate”

Macneil is more of Bishop’s product. Same as Haughey

Big part of Mike’s job is hiring ppl like Bishop.

It’s interesting how (not just in this situation), 5th years going into the transfer portal is now being used to bash coaches/programs. Heck I even saw a comment on another article that implied an athlete simply not taking their 5th year was somehow one more knock against a coach/program. Don’t guess people were expecting that to a be a thing when this first came down the pipeline.

I think a lot of programs aren’t used to having athletes actually graduate in four years. So, they expect the students to stay where they are, which is usually a bad idea if one is going on to graduate school. A student leaving to go somewhere else to swim for a first year of graduate school should be a considered a program success.

This might be a contributor to why he is renewed.

And to add on, u of m grad school admissions is no easy ride

Neither is Cal. Some of friends in academia (professional students who get paid) say there is stigma about doing Graduate studies at the same university you did undergrad.

“You either die a hero, or live long enough to see yourself become the villain.” – Harvey Dent

I don’t get the incentive to do this from the AD’s perspective. Bottom clearly has no intention of taking another job and after this year he’d be unlikely to get a similarly prestigious job elsewhere. Why extend now rather than giving him a year to prove this one was a blip?

1 not good year after a huge Olympic success. Will he be forever in the bad year situation? Or go back to 30+ years of success he had? I believe in the positive side.