Michael Phelps Relaxes while other Olympians Enjoy the Limelight 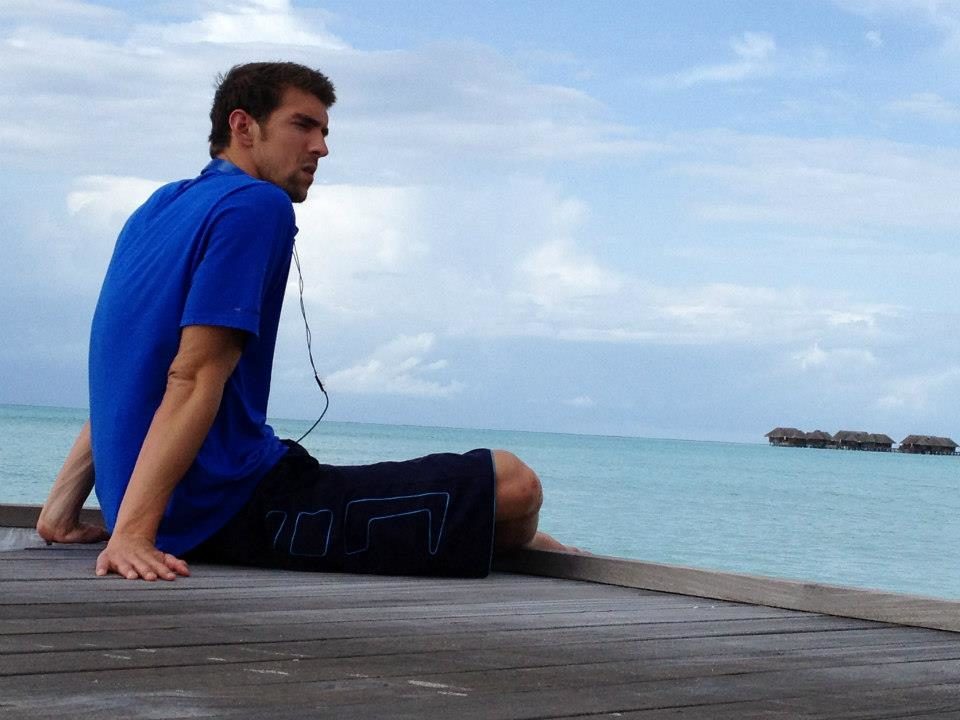 Phelps appears to have found the right balance between his celebrity-life, work-life and relaxation. As early as January of 2012, it was the main topic of conversation among the traveling horde of reporters that followed Phelps from Grand Prix to Grand Prix to his gold medal performances at the Olympic Games: “Phelps seems happy!” “He’s so relaxed.” “Phelps looks like he’s actually enjoying himself.”

After Phelps’ fourth iconic performance at an Olympic Games, here’s where he went to decompress, The Maldive Islands:

Michael Phelps points to a map of the Maldive Islands

Michael Phelps photo from a prop plane flying over The Maldives

Michael Phelps lands at his Maldive Island resort with his boys. Phelps is in the green shirt.

Michael Phelps ate dinner with his boys and a bird

Michael Phelps doesn’t appear to be going faster with the aquatic device than he could under his own power…and, clearly, he did not bring a pair of goggles for the trip.

Michael Phelps with the catch of the day and dinner…?

Phelps tweeted that this was his best vacation ever:

Thanks to the @ConradMaldives, I had the best vacation ever! Got to hang out with some friends after the Olympics. Check out the pics!

Celebrity-wise, yes, there’s been talk of a reality golf show, his Wheaties box cover was unveiled, and the Louis Vuitton ad slipping out during the Olympic Blackout Period –the International Olympic Committee’s dictatorial rule 40 — was news for 48 hours, but, for the most part, Phelps has remained low-key.

Phelps has tweeted happy birthday to Olympic peer, Natalie Coughlin, stayed in-touch with fellow flyer, Ian Crocker (who arguably remains the fastest textile suit 100m flyer in history with a 50.4), and tweeted his support to the USA National Swimming Team at Jr. Pan Pacific Championships, in particular, to his former training teammate at North Baltimore Aquatic Club, Chase Kalisz. (Kalisz improved on his US Trials 400 IM personal best going a 4:12 in Hawaii.)

TMZ and other celebrity sites have tried to spin negative news about Phelps’ girlfriend, but it’s all benign fluff.  Phelps appears to be in complete control and prepared for his long life as a sports celebrity.

QUESTION: Like Phelps’ favorite basketball player, Michael Jordan, will Phelps enjoy lucrative endorsement contracts and visibility for the next twenty years or longer?

I would never find the right words to describe how much I admire Phelps.

I saw his brilliance in Athens, his passion in Beijing and his happiness in London. I don’t care if he has done his mistakes in life, who hasn’t?? And he was a kid during most of his career, it’s remarkable how well he handled the turmoil of the fame.

Honestly, I’m very moved by everything he has done, it’s been amazing to live and say I saw him in his very best shape.

I’m gonna miss him in the pool, but one can tell he’s doing the right thing, he’s happy.

…I think he’s matured a lot over last Olympics. I bet a lot of fans feel like they’ve watched him grow up — just watching the Olympic Games — since 2000.

Its nice to see Phelps enjoy himself. He seems at peace with himself. He has given so much to raise the bar in the sport of swimming, he deserves to enjoy new experiences and what life has to offer. I agree that he has matured since the last Olympics! Keep the happiness Michael.. you are a legend!

His agent said Phelps had recently signed 2 more sponsorships, but he didn’t want to say what those sponsors were.

…he’ll announce on a talk show. The corporate sponsor will do the press release, but they’ll time it to bounce when he’s interviewed on a national show.

I see, it makes sense. By the way, his Speedo contract expires next year, if I’m not wrong. What do you think, are both sides interested to renew it, considering Phelps has retired?

He’s aiming to keep in shape, so he could still do the shoots and catalogs if they wanted him too. But I feel like they will revise the contract in some other way, as in he will do more events and things… Guess we will have to see!

Good for Mike. He deserves this rest. There will probably never be another MP.