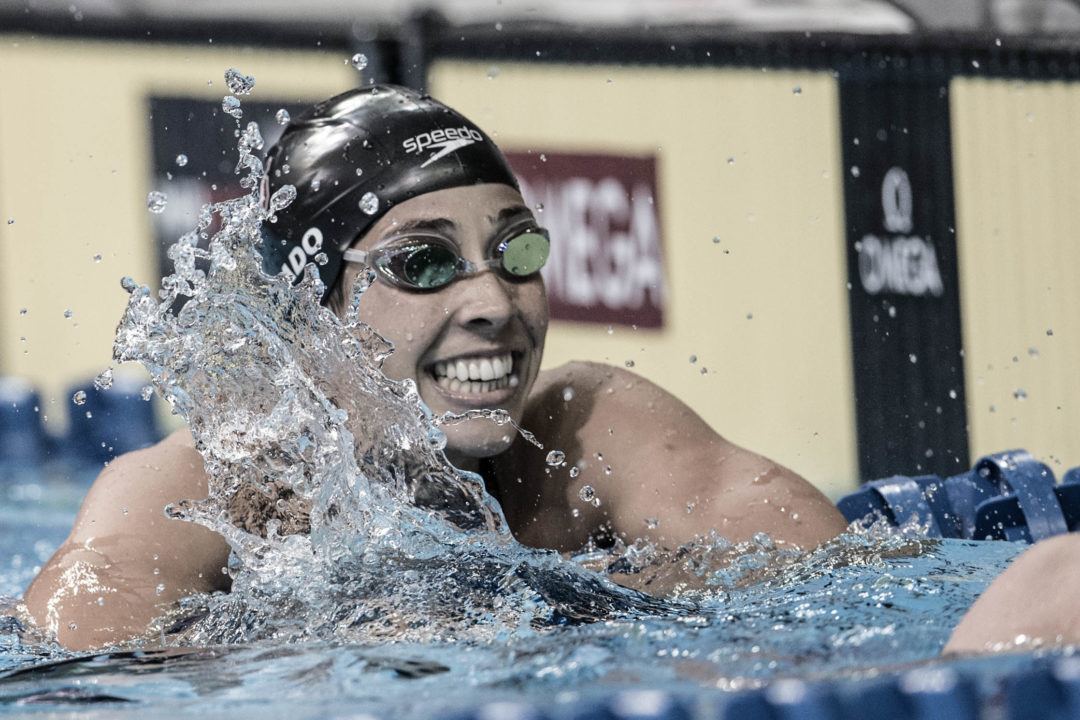 Meet Maya Dirado, the first-time Olympian who swam at Stanford University collegiately. She recalls how seriously she took warmup and the... Archive photo via Mike Lewis/Ola Vista Photography

Meet Maya Dirado, the first-time Olympian who swam at Stanford University collegiately. She recalls how seriously she took warmup and the technical side of the sport, and admits to being a huge swim nerd growing up. Dirado says that Misty Hyman, one of her swimming idols, gave her her swim cap after Pac-10s in Federal Way. It meant so much to her that she broke down in tears afterwards. While she didn’t think that she’d be swimming past college, Dirado kept swimming so well that she decided to “go for it” and make the push for Rio. Go for it she did, as Dirado qualified in three events, the 200 IM, 400 IM, and 200 back, and is a medal contender in all three of those races.

Her full name is Madeline, but her sister, Sarah, gave birth to “Maya” when she couldn’t properly pronounce it. The versatile swimmer began competing at the age of 6 with the Santa Rosa Neptunes. She quickly became a standout, setting team records in every age group and in events ranging from the 50 free to the 200 back to the 400 IM.

DiRado was quite busy at the 2013 FINA World Championships in Barcelona, Spain. She became a world champion as part of the United States’ 800 meter free relay. She was also 4th in the 400 meter IM and 12th in the 200 meter fly.

DiRado qualified for her second World Championship Team in 2015 competing in the 400 and 200 meter IM events. She first took on the 200 meter IM against big names like Katinka Hosszu and Siobhan-Marie O’Connor. With more nerves to deal with than usual, DiRado swam the best race of her life breaking her individual goal for the meet, which was to break 2:09. The moment was bittersweet for DiRado because as she touched in a lifetime best of 2:08.99, she finished in 4th just missing out on a medal.

In her next event, the 400  meter IM, DiRado again qualified for the championship final. After holding 2nd place for the majority of the race, DiRado began to catch up to Hosszu who was leading the race on the last 50 meters. Although DiRado claims she thought the wheels were coming off that last 50, she actually gained ground on Hosszu and finished 2nd to win her first individual medal from the World Championships.

DiRado will represent the US in Rio in the 400M Individual Medley. DiRado was in second place after the butterfly leg and then tookover the lead in backstroke, never looking back. She finished with a time of 4:33.73, three full seconds ahead of 2nd place finisher, Elizabeth Beisel. DiRado won her second event and added the 200M IM to her Olympic schedule. She led the race from start to finish, winning with a time of 2:09.54. DiRado added a third event, winning the 200M Backstroke, finishing just ahead of Missy Franklin.

Get the podium ready.
Love the way she carries herself.

Maya is so cute she could model