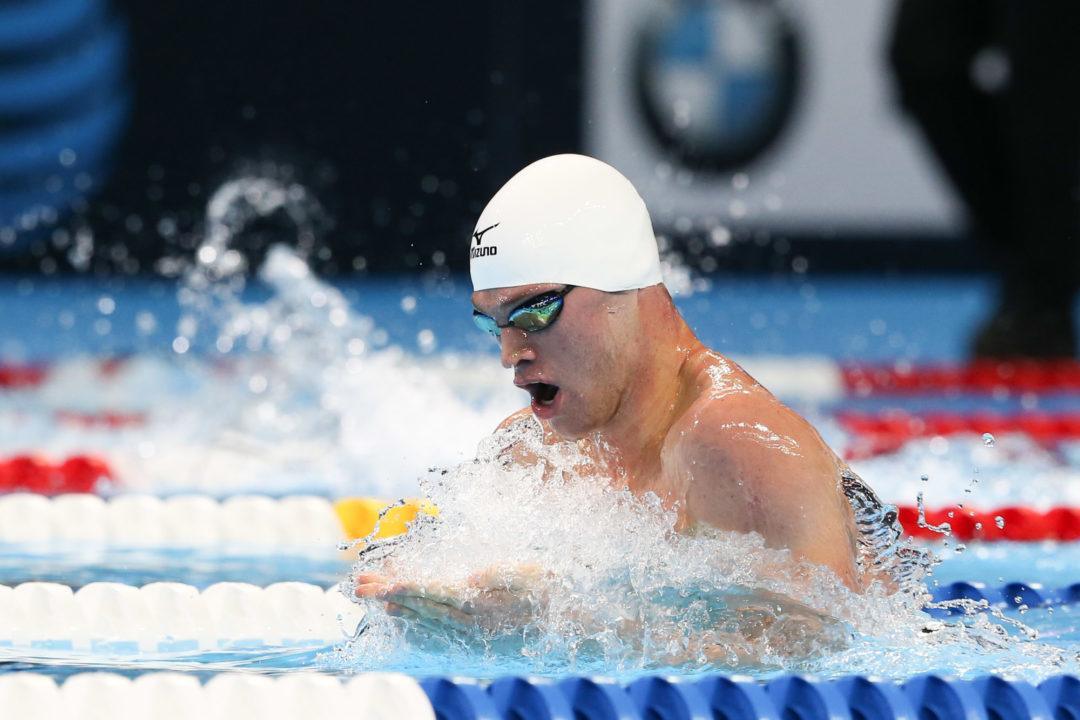 Meet Kevin Cordes, the Naperville, Ill. native and American record holder who will be competing at his first Olympic Games. Cordes... Current photo via Tim Binning/TheSwimPictures.com

Meet Kevin Cordes, the Naperville, Ill. native and American record holder who will be competing at his first Olympic Games. Cordes swam at the University of Arizona, and says that he loves competing and racing. He remembers a mortifying time during age group swimming when he didn’t have his goggles on at the start of a race and had to swim without them. Getting third at the 2012 Trials was hard for Cordes, but he said that it was a huge motivator and helped push him to be even better in 2016. He’ll swim both breaststroke races in Rio, and is expected to swim the breaststroke leg of the 4×100 medley relay as well.

Cordes continued to be a star for the Arizona Wildcats in 2013. At the 2013 NCAA Division 1 championships he won both the 100 and 200 breast. He lowered his 100 breast American Record once again with a 50.74 and even-split a 49.56 (the fastest-ever breaststroke split on a medley relay). He would also lower his 200 breast American Record with a blistering 1:48.68. During his junior year of competition, Cordes once again qualified for the NCAA Championships. He went undefeated individually once again, picking up wins in both the 100 and 200 breaststrokes. Cordes returned his senior with undefeated titles, where he won the 100 breast for the fourth year in a row, but in the 200 distance Cordes finished second.

Although Cordes continued to swim fast throughout 2012, he narrowly missed making the US Olympic team with a 3rd place finish in the 100 breast. Cordes also competed in the 200-meter breast, but he finished 12th overall.

At the 2015 World Championships in Kazan, Cordes swam the breaststroke events for the USA. Cordes competed in both the 50 and 200-meter distances, leaving the 100-meter to the likes of Nic Fink and Cody Miller. In the 50, Cordes came out of the semi-final in 3rd place, and solidified his position in the championship final. In the final, Cordes held on to his 3rd place finish to grab a bronze medal. In a tight heat, he finished just .3 behind the gold-medal winner. In his best event, the 200-meter breaststroke, Cordes advanced to the championship final in a stacked heat full of talent. After diving off the blocks with the slowest reaction in the field, Cordes turned at the 100-meter mark in 3rd, and pulled ahead of the leader Andrew Willis to finish 2nd behind Germany’s Marco Koch.

Individually Cordes won two medals, but he also competed on the USA’s 4×100-meter medley relay. Swimming the breaststroke leg, Cordes split the second-fastest time in the field, and the squad finished first for a gold medal just .1 seconds ahead of Australia.