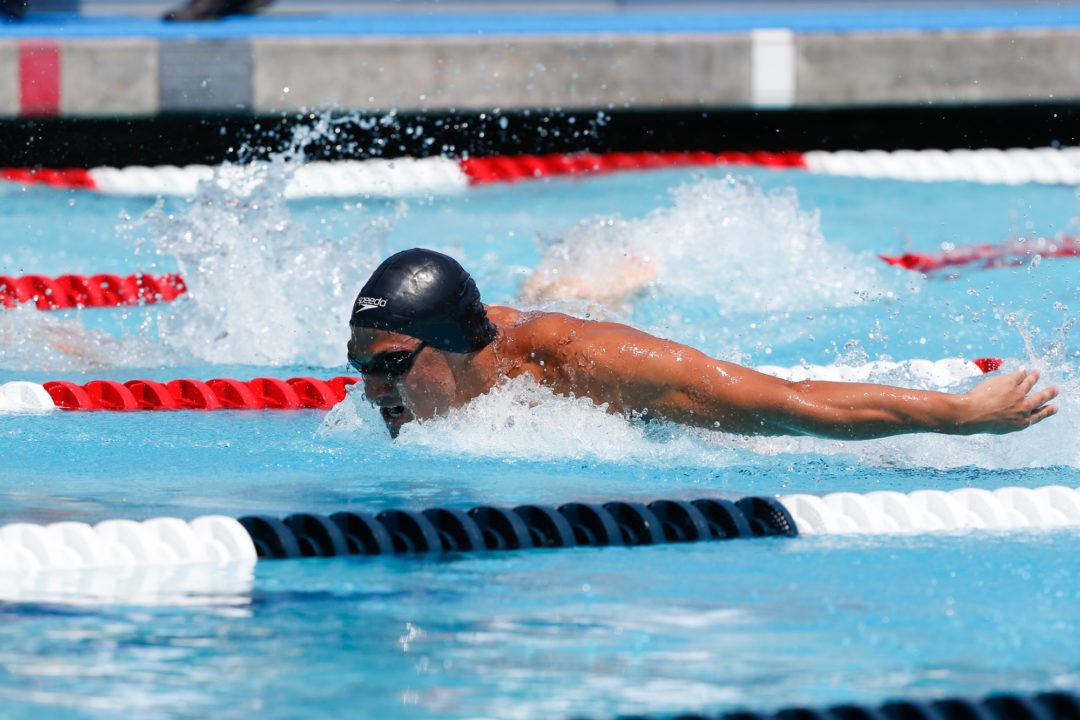 Rooney posted a very strong 47.87 100 fly win, while Mabel and Rosie Zavaros won a combined four events on the women's side. Archive photo via Tim Binning/TheSwimPictures.com

In the first meet for the Florida Gators now that longtime head coach Gregg Troy has retired from leading the combined program, the men and women both handed Florida Atlantic resounding defeats in Boca Raton. New women’s head coach Jeff Poppell and new associate head coach Whitney Hite got their first win on the board as the Gator women downed FAU 210-68, while Anthony Nesty and Stephen Jungbluth registered an easy win on the men’s side 227-52.

Additionally, freshmen Kirschtine Balbuena (50 free, 23.76) and Vanessa Pearl (200 fly, 2:01.88) found wins today in their first tastes of NCAA competition. This is an important freshman class for Florida, who could be looking at a turning point after falling out as a perennial NCAA power the last few seasons. Many swam off events, so it’s yet to be seen if this rookie class can help the Gator women get back on their feet.

Florida was dominant against FAU nonetheless, winning nearly every individual event as well as both relays. They finished at 1:42.79 in the 200 medley relay, keying on a 25.57 backstroke lead-off from junior Emma Ball and a 24.25 fly split from junior Sherridon Dressel. Their 400 free relay posted the top time of 3:28.24.

Junior Maxime Rooney, now an upperclassman leader for the Gators, pulled out two wins and was key on relays to help lift Florida over FAU.

With All-American Michael Taylor taking a redshirt season, Main will be heavily depended on to lead UF in the backstrokes. He won’t have to brunt that alone, however, thanks to exceptional backstrokers (and freshmen) Kieran Smith and Kacper Stokowski. Main won the 100 back in 48.87, just edging Smith (49.21), while Main was 2nd in the 200 (1:49.50) behind another freshman, distance specialist Robert Finke (1:49.03).

Stokowski, meanwhile, posted a win in the 200 free with a time of 1:38.55. The freshman from Poland has been heralded as a key backstroke get for UF, but he’s also a strong freestyler who could end up being a free relay asset down the road. Another freshman, Trey Freeman, took the 500 free with a time of 4:28.77.

Pearl and M Zavaros are gonna be good