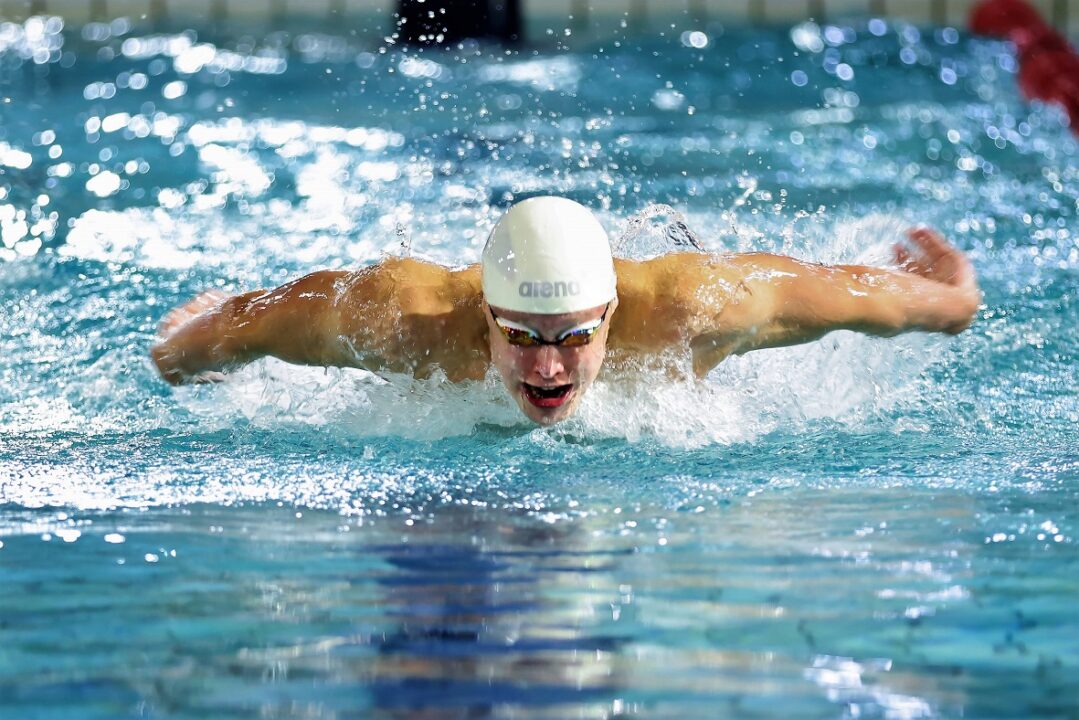 Georgia freshman Matt Sates swam his first ever 200 yard IM and 400 yard IM on Saturday to give himself more options for the NCAA Championships. Archive photo via Swimming South Africa

The University of Georgia hosted one of a number of “Last Chance” meets this weekend with a primary purpose for swimmers who may have missed tapers or time goals at their conference meets to have one last qualifying opportunity for the NCAA Championships.

Historically, between 26-30 men’s swimmers are invited to NCAAs per individual event, and between 36-40 women’s swimmers.

At Last Chance meets, a swimmer can swim a race in a prelim, final, time trial, and relay leadoffs, but cannot swim a race endlessly to chase a better time.

For the women, this is the last weekend to post times for NCAA qualification consideration, with the cutoff for result submission being 11:59PM Eastern Time on Sunday.

The host Georgia Bulldogs made good work of the opportunity with three swimmers posting times that rank them in the top 10 all-time in school history:

Other storylines include Auburn’s Mikkel Gadgaard chasing an NCAA qualification via Last Chance meet for the second straight year.

Last season, Gadgaard needed a post-conference Last Chance meet to qualify for the NCAA Championships. After swimming 4:16.60 for 9th place at SECs, he was back in the pool two weeks later and dropped a 4:12.80, which easily got him to Greensboro.

This year, he missed the SEC Championships with what the school called a non-COVID illness.

In prelims on Saturday he swam 1:34.08, which shaved .04 seconds off his previous season-best. That moves him up a few spots, but still ranks him in the 40s, which won’t get an invite to NCAAs. He’ll now have to count on a 500 free on Sunday to qualify, an event where it currently looks like about a 4:14.0 will qualify. His lifetime best is a 4:12, but his season best is only 4:16.

The University of Florida also had a lot of work to do after a number of swimmers missed the SEC Championships for COVID-19 protocols (though they still dominated the meet).

The Gators locked up a number of additional qualifiers on the day, including:

BIG time improvements in Florida’s male breaststroke corps. Last year, they only had two guys under 54. This year, they have four at 53.0 or better.

Last. Chance meets are a double edge sword….for every real good swim at the meet, someone out there is getting bumped!

This is an end of season meet for many non conference swimmers. Especially ones that are very fast in one or two events but lack the depth the conference team needs. They’re getting bumped out just the same as they would in any other conference meet.

Don’t forget American Short Course Championships or Eddie Invitational or whatever it’s called next week in Austin. Based upon who UT left home this week, it will be very fast with lots of cuts and bubble swimmers being bumped.

Rachel Stege was battling an injury for much of her senior year that clearly was still affecting things this year. Hope this is a sign that she’s healthy now. She’s a special talent.

Looking at the times across the country she may be right on the bubble to make the meet ! Hoping she gets to go !

Can anyone explain Bobby Finke’s 24.5 50 yard free? Was he doing breaststroke?

He swam fly in a brief

Good eye – missed it in the B final.

The Aussies are going well. Quach from Ohio, Hawke from Alabama and Millard from Yale. Plus Sheridan as well.