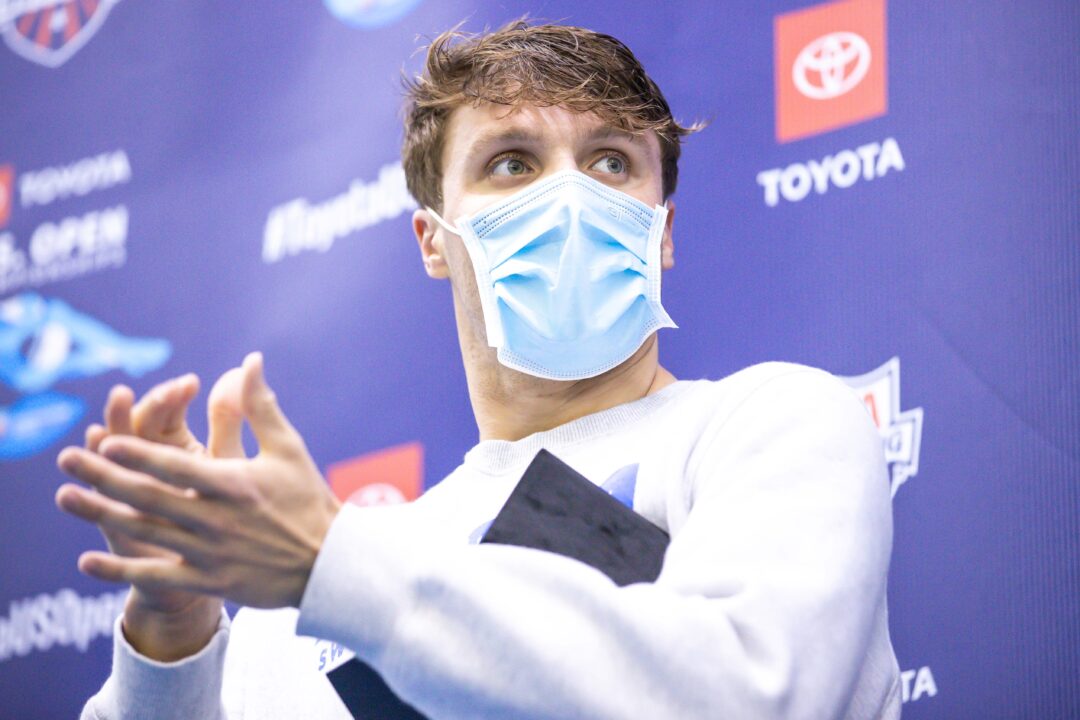 Finke, the reigning three-time SEC champion in the 1650 freestyle, will miss the meet due to COVID-19 health and safety protocols. Archive photo via Jack Spitser/Spitser Photography

The Florida men have been dealt a major hit in their bid for a 10th straight SEC Championship title.

Florida Athletics broke news on Monday that Gator senior Bobby Finke will miss the conference championships, though they didn’t expand on any specific details.

Finke himself replied to the article on Twitter, saying he was “following health & safety protocols” and intends on rejoining the team in training prior to next month’s NCAA Championships. He later confirmed to SwimSwam that he was referring to COVID-19 health and safety protocols.

I am following health & safety protocols, but am looking forward to cheering on the Gators and rejoining the team to train for NCAAs.

Finke, who was the clear favorite to win a fourth-straight SEC title in the men’s 1650 free and was also a title challenger in the 500 free and 400 IM, continues to have a string of bad luck at championship meets.

In 2019, he was forced to withdraw from the World University Games due to a wrist injury after a scooter accident, and then last season, was wearing a walking boot on the eve of the SEC Championships.

Finke has won three consecutive SEC titles in the men’s 1650 freestyle, having set the NCAA, U.S. Open and American Records at the 2020 championships in a time of 14:12.08. Last season, despite the walking boot, he won the event with the second-fastest time ever at 14:12.18.

The 22-year-old also took second in the 400 IM and fifth in the 500 free to score 85 points for the Gators at the 2021 SECs, helping the team to a ninth consecutive victory.

Finke followed that up by winning the first two NCAA titles of his career as a junior, claiming both the 1650 free and 400 IM at last season’s national championships.

He then had a breakout summer on the international stage, winning two gold medals at the Tokyo 2020 Olympic Games in the men’s 800 and 1500 freestyles.

In spite of Finke’s absence, the Florida men remain well-positioned to make it 10 in a row at SECs, with the Swimulator projecting them to win (with Finke competing) by nearly 300 points. While that number will fall with him out of the lineup, the Gators remain firmly in control.

The 2022 SEC Championships will kick off on Tuesday, Feb. 15, with diving, plus timed finals of the 200 medley and 800 freestyle relays, and run through Saturday, Feb. 19.

Looks like Florida is missing the Davis brothers as well and Quinn, and diving points in Lydon so the numbers are piling up.

They are starting to add up a little, but neither Davis brother was going to score enough points to swing this meet. UF still has over 100 points to play with.

Just doesn’t want to be in the same lane with Ledecky after this past weekend.

Just train through it, I guess.

Jake Magahey has entered the chat

All I want is for him to accidentally break the freaking 1000 record during a 1650 but he’s running out of chances!

61
-1
Reply
Ugly IS my alibi
Reply to  Willswim

Well it’s pretty obvious that he got covid

Covid caught him on the last 50

The least likely thing to ever happen.

Maybe Georgia can win a SEC title. I don’t know if they have ever won one?!?
No Finke for UF and add Sates for UGA