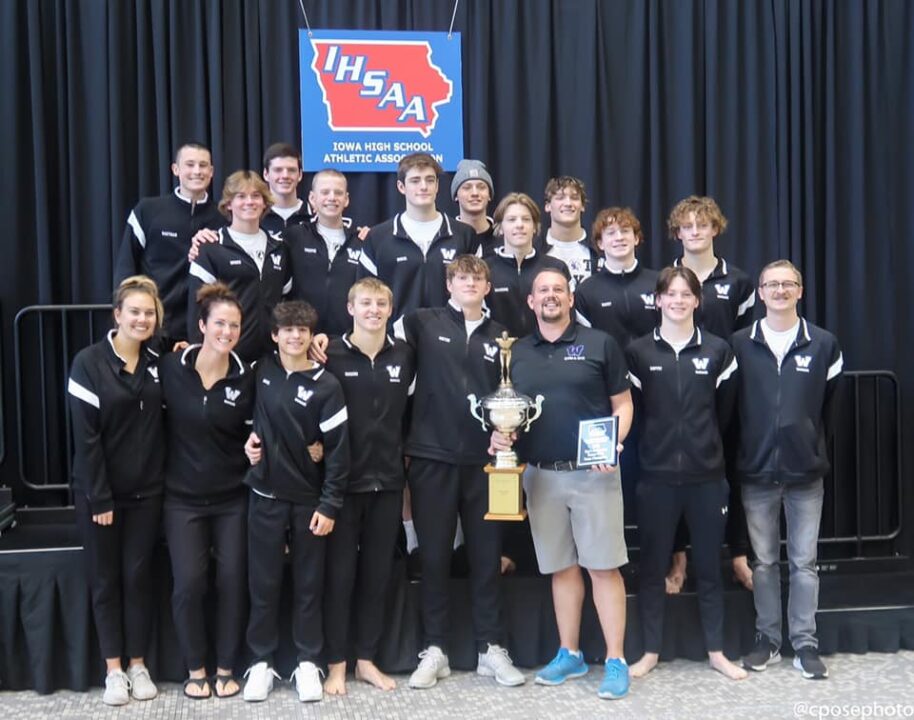 A pair of individual victories from AJ Abram in the 100 and 200 freestyles led Waukee to the top of the podium in one of the deepest Iowa state meets ever.

The Waukee High School boys are emerging as the new swimming power in the state of Iowa. They came out of the fray at a very fast state meet last weekend with their second-straight Iowa State Championship and fourth in the last seven years.

Head coach Dan Briggs now has four state titles, which ties as the fifth-most in Iowa state history – a state that has been awarding team titles since 1938.

The team’s 293.5 points are the most in state meet history, surpassing the 268.5 that Waukee scored last year.

This meet was dominated by juniors and seniors, and wound up being the deepest state meet in Iowa history, top-to-bottom, even though only one State Records was broken.

That record-setting swim came in the opening race of the meet, where Iowa City West broke the 200 medley state record by seven-tenths of a second.

Brotherton each had the fastest split of the field on the anchor leg.

The old record was set in 2020 by one of Iowa City’s two other comprehensive high schools, City High, in 2020 in 1:31.58. That old record relay included Forrest Frazier, the best male high school swimmer from Iowa in at least the last decade, who is currently a sophomore at Cal.

The champions from Waukee were paced by two wins from junior AJ Abram and another from senior Andrew Reiter, plus a fourth individual event title late in the meet in the 100 back from junior Asher Havenhill.

Waukee opened the meet hot by winning each of the first two individual events. Abram, a Kentucky commit, won the 200 free in 1:36.13. That whacks almost two seconds off his previous best time of 1:37.9 from Winter Juniors West last December.

This season, even as a high school junior, Abram would rank 2nd on Kentucky’s roster in the 200 free – showing how much of an impact he will make when he arrives in the fall of 2023.

He won a highly-anticipated head-to-head matchup with the Bettendorf senior Alex Stone, who won the 50 and 100 free at last year’s state meet, but who this year shifted to the 100 and 200 free. Stone finished 2nd in a best time of 1:37.02.

Waukee got another win in the very next race thanks to Andrew Reiter, who successfully defended his 200 IM title. He swam 1:48.57 to earn an Automatic All-America honor from NISCA. Even though his time was slower than the 1:47.7 that he won with last year, he still cruised to a win in 1:48.57.

Waukee went a little quiet in the next few races, allowing West Des Moines – Valley to creep up on them in the team standings, but Abram was back in the pool to drop another hammer in the 100 free, winning in 44.60. This race saw five swimmers go faster than 45 seconds.

The late bloomer still has not committed to a college.

The defending champion in the 100 free Stone finished 4th in 44.94, while Waukee’s Havenhill was 5th in 44.97. Putting two swimmers in the top 5 of that race started to break the competition open a little for Waukee.

Waukee’s strengths are in the front-end and the back-end of the high school schedule, and they showed that by picking up two more victories in the last three events of the day.

Havenhill, after placing 5th in the 100 free, won the 100 backstroke in 48.85. The Arizona State commit was the runner-up in this event last season at 50.13; on Saturday, his winning time was a full second faster than what won the meet last year.

Waukee only graduates Reiter from that relay, and with each of the six teams behind them graduating at least two seniors, they’re positioned to repeat in this relay next season.

Stone, after being shut out in individual events, ended the meet on a high note with a 44.23 anchor split for Bettendorf’s runner-up relay. That was the fastest split of the entire field.

Great article except Waukee swimmer AJ Abrams is a Junior and his teammate Drew Reiter is a Senior.
Everything else looks correct.

BRING BACK MEN’S SWIMMING AND DIVING at The University of Iowa!

Not a good choice, seeing how hard they looked for a women’s coach.

“That old record relay included Forrest Frazier, the best male high school swimmer from Iowa in at least the last decade, who is currently a sophomore at Cal.”

Mark McGlaughlin? Not sure how the total number of individual event championships etc shake out but its gotta be pretty close. Not to dig at you too much – I understand asking anyone to have a mental list of Iowa’s best recruits is a tall order lol.

And for me, the tie breaker is this: Frazier broke McGlaughlin’s State Record in the 200 IM by almost a second.

Anyway, we can agree that they’re 1 and 1a, in some order.

Sounds fair to me, thanks for digging up the stats!