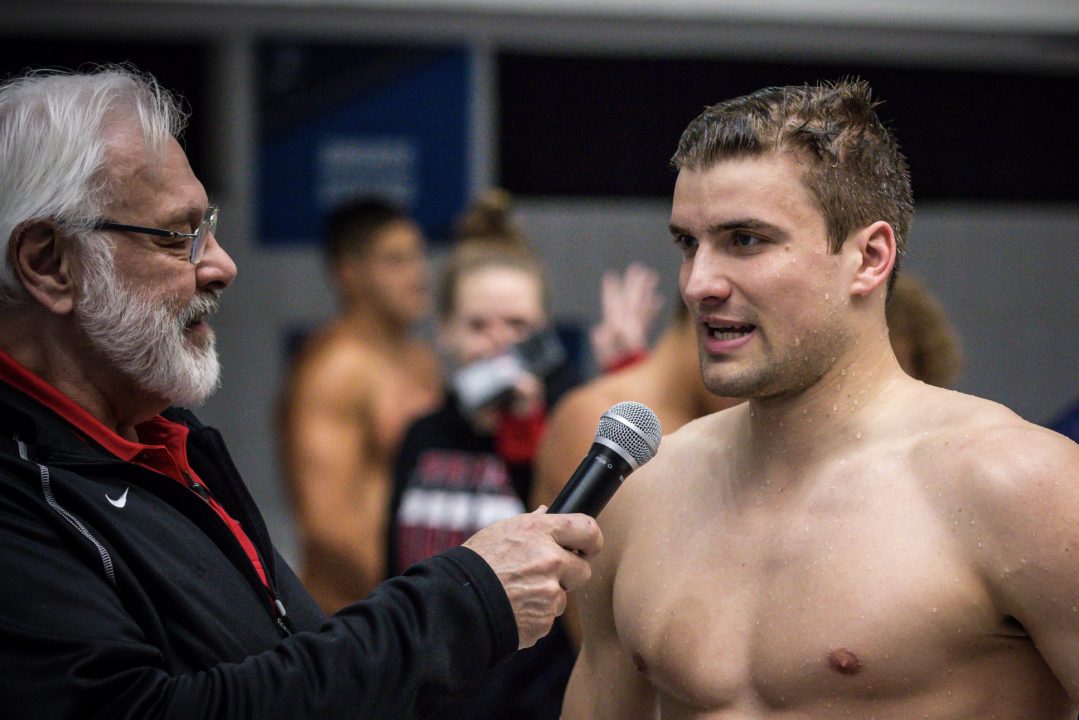 Marius Kusch lowered the NCAA Division II and championship meet record in the 100 back on Friday with 45.09. Current photo via Jack Spitser/Spitser Photography

Marius Kusch of Queens picked up his second Division II and meet record with a 45.09 victory in the 100 back on Friday. It marked his third national title of 2019, following wins in the 200 IM on Thursday and the 100 fly, with the 9th-fastest performance in history, on Friday.

Kusch split 21.61 at the 50, already half a body length up on the field. Over the second 50 yards, he pulled further ahead and closed in 23.48 to take a massive .79 chunk out of the national record that had been set by teammate Paul Pijulet at last year’s NCAA Division II Championships.

This was Kusch’s second attempt to break the record at these championships. He led off the Queens 400 medley relay on Thursday night with 45.90, a personal best by .95. Kusch had come into the meet seeded 3rd in the 100 back with 46.95, a time he’d achieved leading off the 400 medley relay at 2019 Bluegrass Mountain Championships in February. Prior to that, he had four recorded 100 back times, ranging from 48.85 to 47.76, all from this school year. (Pijulet, the former NCAA D2 record-holder, was Queens’ backstroker until he graduated last spring.) In the last 5 weeks, Kusch has taken nearly 9/10 off the front-end and has improved the back half by a full second.

Well he is a pro

Is that Gary Kincaid (former DII U Indy head coach) holding the microphone/interviewing in the photo?

Who is he working for in this new role?